Photographer Stefan Bogner has breathed soul into mountain passes. For his new book Porsche Drive Grossglockner, he assembled an unparalleled collection of Porsche cars in front of his lens.

For Porsche enthusiasts, the feeling is the same as it would be for biologists to discover a rare Javan rhinoceros, a South China tiger, a wild panda or a North Island brown kiwi. The chance of coming across even one of these rare species is extremely low. If you were to come across all of these together, you wouldn't be able to believe your eyes. But the experience that Stefan Bogner has created here at the Grossglockner is very real.

The 50-year-old photographer has actually managed to bring together a Porsche era – the ultimate way to experience the history of the sports car. Most of the owners have come a long way for this. The true-to-the-original copy of the legendary Porsche Type 64, the car intended for the Berlin–Rome race, travelled some 400 kilometres from Vienna under its own steam.

“We have come here for Stefan Bogner’s appearance on Austria’s largest mountain. Porsche and Grossglockner simply belong together”, explains Thomas, as he soundlessly pushes between the historic sports cars in a 918 Spyder. The Grossglockner is firmly entrenched in the history of the Porsche brand. Company patriarch Ferdinand Porsche regularly used the steep pass to test the prototypes of his Volkswagen Beetle. He first made jaws drop among the participants of the car and motorcycle race in 1938 as his Beetle effortlessly appeared on the scene. His son Ferdinand “Ferry” Anton Ernst Porsche would later regularly go for mountain drives in the first sports cars to bear his own name, close to the family home at Zell am See. The Grossglockner has inveigled itself into the Porsche genetic material and underpins the sports car DNA.

Stefan Bogner climbs the summit of his photocar, a Porsche 911 GTS – in socks. When he isn’t crammed into the luggage compartment of the 911 or firmly strapped in the belly of a helicopter, the roof of a Porsche is Bogner’s natural habitat. This is how he shot unforgettable images of curves and how he is today trying to capture the fleet of sports cars that  has assembled behind him on the large car park at Fuscherltörl – though  even he finds the gathering hard to take in.

Even the all-electric Mission E is there. The concept car, which will officially be called the Taycan in series production, stands with open doors at the peak and offers a clear view of the breath-taking mountain world. Just behind it are the Le Mans winning car from 1972 and the Speed Merchants camera car, the Porsche 911 ST 2.5, a 911 ST Repsol, then two super sports cars, the Carrera 6 and 962, closely followed by the Pikes Peak legend 718 RSK Spyder, the lightweight 550 Spyder, the new GT2 RS, as well as a Porsche 904.

Such a concentrated Porsche image takes some time to process. “This is madness. I had never thought it possible that they would all come. I am incredibly proud and grateful to do this here. I love mountains and sports cars. To combine both icons, the Grossglockner and Porsche, here for my next book is something very special”, says Bogner, who became well-known for Curves, a pictorial volume featuring solely curves. In Curves, the goal is the journey itself. Soulful driving, he calls it. Bogner took the idea for the logo, the ace of spades, from the Austro-Daimler Sascha – Ferdinand Porsche’s first racing car from 1922. The symbol was emblazoned on the car’s engine cover.

But for Bogner, the Porsche passion is about more than just the vehicles themselves, it is the people and their stories that rekindle the spark again and again. For example, when he heard about the former Porsche factory driver Rudolf Lins, Bogner soon also found out about his search for his former Porsche 904. The owner of the 904 invited Lin to the Grossglockner drive. As a result Bogner and his friends did not only manage to ultimately assemble an unparalleled collection of sports cars here on the mountain, but was also able to spark an old flame again.

“When I learned that my former personal car, the Porsche 904, was also going to be at the Grossglockner, there was no holding me back”, said the 74-year-old Austrian, a former hill racing driver and European champion. The two have not seen each other for more than 50 years. Lins sold the car to America in 1967 and they lost touch.

“I love this type of stories. We have even spoken with contemporary witnesses from hill racing history and interviewed manufacturers of marmot ointment, an Alpine specialty”, says Bogner. “Working with the author Jan Baedeker, I would like to revive the experience of living and driving on the Grossglockner”, he rhapsodises. “In a Porsche, it is truly unforgettable.”

The Porsche vehicles gather back in the car park at the end of the photo shoot. There is a lively atmosphere among like-minded people. When a Porsche 991 Targa with a Swiss number plate shows up all of a sudden, the two occupants make a beeline to Stefan Bogner. They have two copies of Curves under their arms. Time for an autograph session. 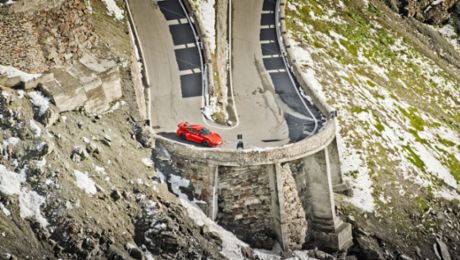 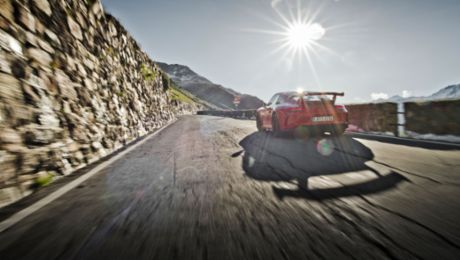 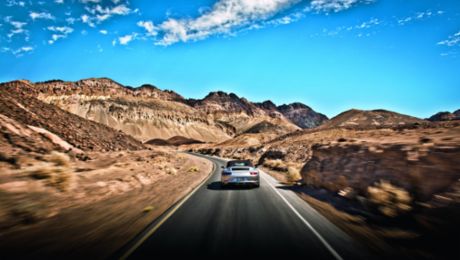 With the 911 through the curves of California