As part of his cultural road trip through Europe, music journalist Niko Hüls immerses himself in the creative center of Paris. There, he meets rapper Lord Esperanza and art curator Nicolas Couturieux.

Paris, the city of love: Eiffel Tower, Arc de Triomphe, Sacré-Cœur, Champs-Élysées, Montmartre. But for "Back 2 Tape," I was allowed to visit another side of the French capital in autumn 2019.

The metropolis on the Seine is the epicenter of international art and fashion. It encompasses quiet as well as loud tones, domestic and foreign beats. Two creative yet different children of this fascinating scene are Nicolas Couturieux and Théodore Despre. They fight for graffiti as an art form, for French rap, for values - and for the generations to come.

Language as a passion

The 23-year-old Théodore Despre is known in France under his stage name Lord Esperanza. Despre is atypical for a rapper. Early on, the shooting star of the French hip-hop scene proved that rhymes don't have to come from the ghetto. On one side, as Esperanza, he quotes literature in his texts. On the other, as Lord, he takes a critical look at the political system.

"My childhood was not very easy. I grew up in two different worlds. My mother did not have much money, but she supported me in everything. My father often took me to classical concerts and readings, and that shapes my music today," says Théodore Despre. He has now been making music professionally for more than four years.

In the meantime, Lord Esperanza not only has millions of clicks on YouTube and Spotify, but also his own label onto which French newcomers are signed.

An artist with responsibility

Lord Esperanza enriches hip-hop without excess. For example, he speaks out strongly against the use of drugs. "Fortunately, there are still artists with responsibility. I try to be one of them. I want to give the new generation some hope - times are crazy enough," says Despre. Many see him as the antagonist to the supposedly-empty rap music in France. One who scores with intellectual lyrics and language instead of just hard beats. A literary nerd. "Hip hop started with a political opinion - today it has become more and more entertainment. I'm trying to change that, along with a lot of other great artists, here in Paris," Despre says.

Someone else who follows exactly the same maxim meets me at a rather unusual place for hip-hop: in an art print shop. 49 Rue de Montparnasse. Formerly known as Mourtel Idem, it is one of the oldest printing houses in the city. Even Matisse and Picasso were reproduced here - a historic place. In 2017, Nicolas Couturieux and a few like-minded people will breathe new life into the old, heavy printing rollers.

The 37-year-old's life plan could hardly be more colourful. Art curator, hip-hop producer and editor. Couturieux is a veteran of the Parisian creative scene. "I want graffiti to be established as an art form at some point, to be exhibited in museums," says Couturieux. "Because for many art lovers, graffiti is still an affront."

Couturieux’s first attempt to pay homage to French and American graffiti artists has been going on since 2018 in the cities of Paris, Nancy and Toulouse in cooperation with a collective for contemporary art: Le Hangar107. "Graffiti is my life. I travel a lot around the world for it and look at special works. Coming to Paris is of course always coming back home. Our scene is pulsing with life."

To make sure that it remains so, the art lover engages in many different levels. "Whether sprayers, dancers or MCs, there are many good artists who don't have a decent label." With his national and international contacts, Nicolas Couturieux tries to help, gets involved, and curates street art on behalf of the city. Always at the centre: the good of all.

In 2015, following the dramatic terrorist attack on the editorial staff of the Parisian magazine Charlie Hebdo, the 37-year-old, in collaboration with the Libération newspaper and the Palais de Tokyo, raised thousands of euros to finance programmes that promote press freedom. Couturieux also regularly organises exhibitions to promote Holocaust remembrance, skilfully linking the past, present and future with hip-hop culture.

In 2018, music journalist Niko Hüls embarked on a journey to the roots of hip-hop in Germany in "Back to Tape". Now, he’s continuing his road trip across Europe in a Porsche Cayenne S Coupé. In cooperation with the hip-hop magazine Backspin.de, the Porsche Newsroom project "Back to Tape" sheds light on cultural influences through the four central elements of hip-hop: rap, DJing, breakdance and graffiti. In Part 5, Niko Hüls visits Barcelona. 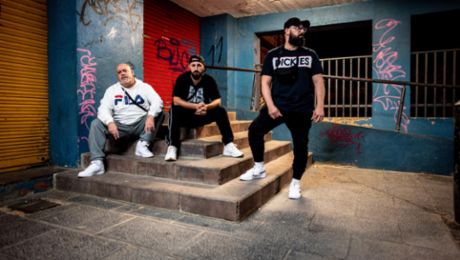 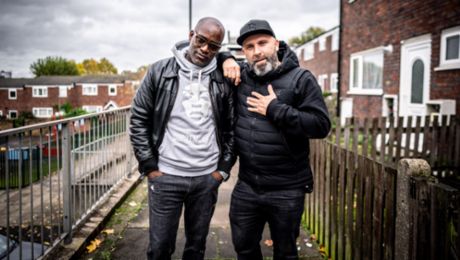 Back 2 Tape on the trail of hip-hop in Europe: London 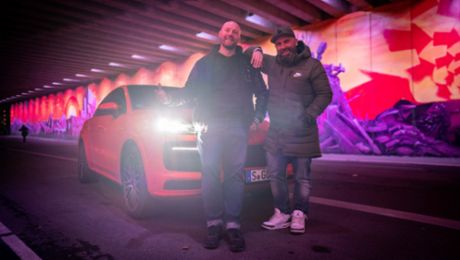