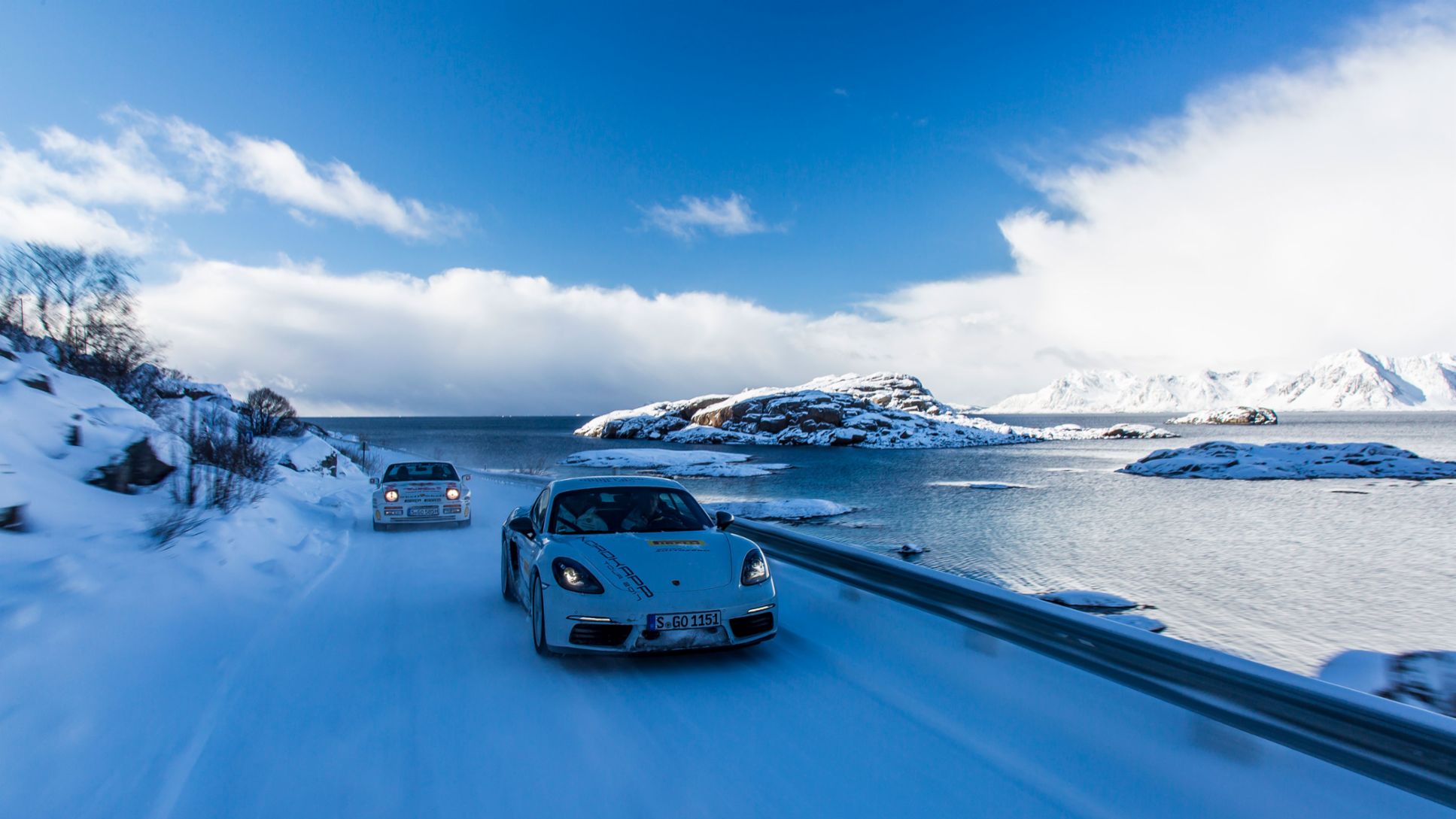 A winter journey with the Porsche 944 Turbo and 718 Cayman S, travelling from Norway’s North Cape via Lofoten to the Pirelli test centre in Älvsbyn, Sweden, is demanding on both vehicle and driver.

In the north of Norway, drivers are constantly waiting, whether for the Northern Lights, for the sun, for the green light when crossing single-lane bridges – or for snowploughs. We certainly hadn’t scheduled time for the latter of these.

We’re on the northernmost road in the world with a connection to an international road system: European route E69. The finest flakes of snow swirl around the Porsche 944 Turbo and the 718 Cayman S. A thin barrier and a bright red sign prevent the duo from continuing their journey to the North Cape, located a mere 13 kilometres away, until the snowplough comes on one of its twice-daily missions to gather those who are scattered around the extreme north and guide them safely in a convoy to the edge of the world. From there, we have approximately another 2000 kilometres of the journey ahead of us, including our visit to Skarsvåg, the northernmost fishing village in the world.

Porsche has been conducting tests in the far north since 1984. In an event that is now bordering on legendary, two 959s – equipped with firewood, sleeping bags, emergency flares and the first 17-inch low-profile winter tyres – slipped and skidded their way from the Porsche test centre in Arjeplog in Sweden to the North Cape in 1987 under the leadership of test engineer Dieter Röscheisen in an attempt to prove the reliability of early electronic components. Röscheisen is also present on this journey. He’s driving the 944, which has come straight from the Porsche Museum and once promoted Porsche’s unleaded turbo engines all over the world. The modern 718 Cayman S is also equipped with 2.5-litre displacement, four cylinders, a turbocharger and rear-wheel drive – reason enough to bring the vehicle on the tour for the purpose of comparing systems.

Whereas Norwegian cars are fitted with spikes, we’re rolling towards Lofoten on spike-free winter tyres from Pirelli. The vehicle safety systems keep the Cayman S firmly on course, but the 31-year-old transaxle requires a sensitive touch on the accelerator. The experimental snow chains break loose from the 944 and are beyond repair. The vehicle must go on without them.

Lofoten – a centre for stockfish

Driving along the E10 and its side roads, we proceed through the fabulously beautiful–yet utterly deserted and brutally cold–island landscape, where the smell of drying cod currently pervades all around. Shortly before taking a ferry from Moskenes, at the southern tip of Lofoten, to Bodø on the mainland, we visit the place that comes right at the top of every alphabetical list of villages in the world: Å. The village’s most important building? The Stockfish Museum. Wow!

The journey south through Norway’s interior and, in particular, the tedious drive along straight roads through Swedish forests after we turned east was mostly uneventful. This didn’t matter, as our destination made up for it: The Pirelli test centre, situated on a lake in Älvsbyn, consists primarily of race tracks and long, wide slopes of ice covered by a thin blanket of snow. Here, both vehicles could be pushed to their limits without any risk. Even the Porsche 924 Carrera GT and Porsche 928 from the museum could have some fun by drifting around corners.

It was worth the wait. And, finally, we even got to see the Northern Lights...