Porsche has set another new record on the Nürburgring-Nordschleife in cooperation with Manthey-Racing. On Thursday, 25 October 2018, the Porsche GT2 RS MR completed a lap of the 20.6-kilometre long circuit in 6:40.3 minutes.

No other road-legal vehicle has ever been so fast on ‘The Green Hell’ track. Lars Kern was at the wheel of the sports car, which had been especially set up for the ‘Nordschleife’ by Porsche engineers and Manthey-Racing experts. The Porsche test driver already set a lap record in September 2017 in a series-production Porsche 911 GT2 RS.

“We kept our eye on the weather all day and thought hard about whether such a drive was possible. We would not have taken any risks if it was raining or if the track was slightly damp,” says Dr. Frank-Steffen Walliser, Head of Motorsport and GT Cars. The Porsche 911 GT2 RS was equipped with the new performance kit from Manthey-Racing, supplemented by an overall vehicle setup tailored to the circuit characteristics of the Nürburgring-Norschleife. “In this test drive, we simply wanted to assess the potential of the vehicle once more. The result is quite impressive. It really is a fabulous time. This shows again very clearly the exciting possibilities of this sports car.”

The Porsche GT2 RS was launched on the market in 2017 as the fastest and most powerful 911 of all time so far. In recent months, Porsche engineers used their know-how from development of the 911 RSR and 911 GT3 R race cars as well as the experience of Manthey-Racing gained in numerous successful races on the Nürburgring-Nordschleife. The targeted modifications included the areas of chassis and aerodynamics. The technicians focused on suitability for on-road driving at all times.

“The drive was great fun,” says development engineer Lars Kern. The 31-year-old knows the ‘Ring’ very well from test and record drives as well as numerous VLN races. “The balance of the car is also very good with the new package. I did not have to take any great risks to be fast. But I only had one attempt because it was already getting dark. It worked out first time though.” Manthey-Racing CEO Nicolas Raeder adds: “We are very proud. It was a great challenge to make the already tremendously fast Porsche 911 GT2 RS even faster.”

In autumnal but dry conditions, Lars Kern optimally exploited the huge potential of the Porsche 911 GT2 RS MR on his record lap under the eyes of a notary. For the fuel, Porsche relied on Esso as a proven partner from motor sports. The driver's seat was the only modification compared with the version of the GT2 RS MR that can now be ordered from Manthey-Racing for club sport and track day events. A racing bucket seat was fitted in the record-breaking vehicle for safety reasons. This modification did not provide any weight benefits.

About the Porsche GT2 RS

The fastest and most powerful Porsche 911 made its world debut at Goodwood in the UK in June 2017. The 3.8-litre engine produces 515 kW (700 hp; Fuel consumption combined 11.8 l/100 km; CO₂ emissions 269 g/km) and delivers a torque of 750 Nm. The top speed of the rear-wheel-drive sports car is 340 km/h. The two-seater weighs in at just 1,470 kilograms and accelerates from a standing start to 100 km/h in just 2.8 seconds. In September, Porsche presented the new Porsche 935, based on the ultra-modern technology of the 911 GT2 RS, at the Rennsport Reunion VI in Laguna Seca, California (USA). The exclusive vehicle, which is designed for track day use, will be delivered to customers next year in a limited production run of just 77 cars.

The company Manthey-Racing is based in Meuspath at the Nürburgring and is managed by the brothers Nicolas and Martin Raeder. Porsche AG owns a 51 percent share in the company. Manthey-Racing offers services, part packages and race events for customers. The racing team from the Eifel region is the sole record holder with six overall victories in the 24 Hours of Nürburgring race. Among other things, the team from Meuspath is responsible for the two 911 RSR entered in the FIA World Endurance Championship (WEC). In this race series, Porsche achieved a class victory in the 24 Hours of Le Mans in June 2018. The Porsche GT Team also currently has a clear lead in the overall WEC classification. 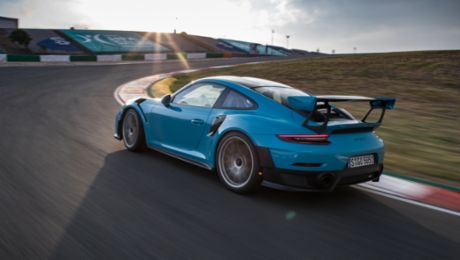 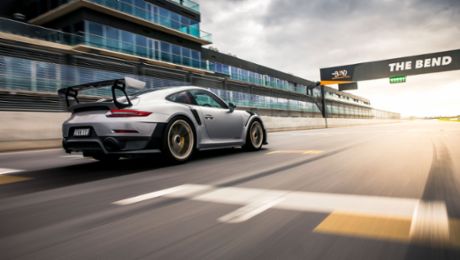