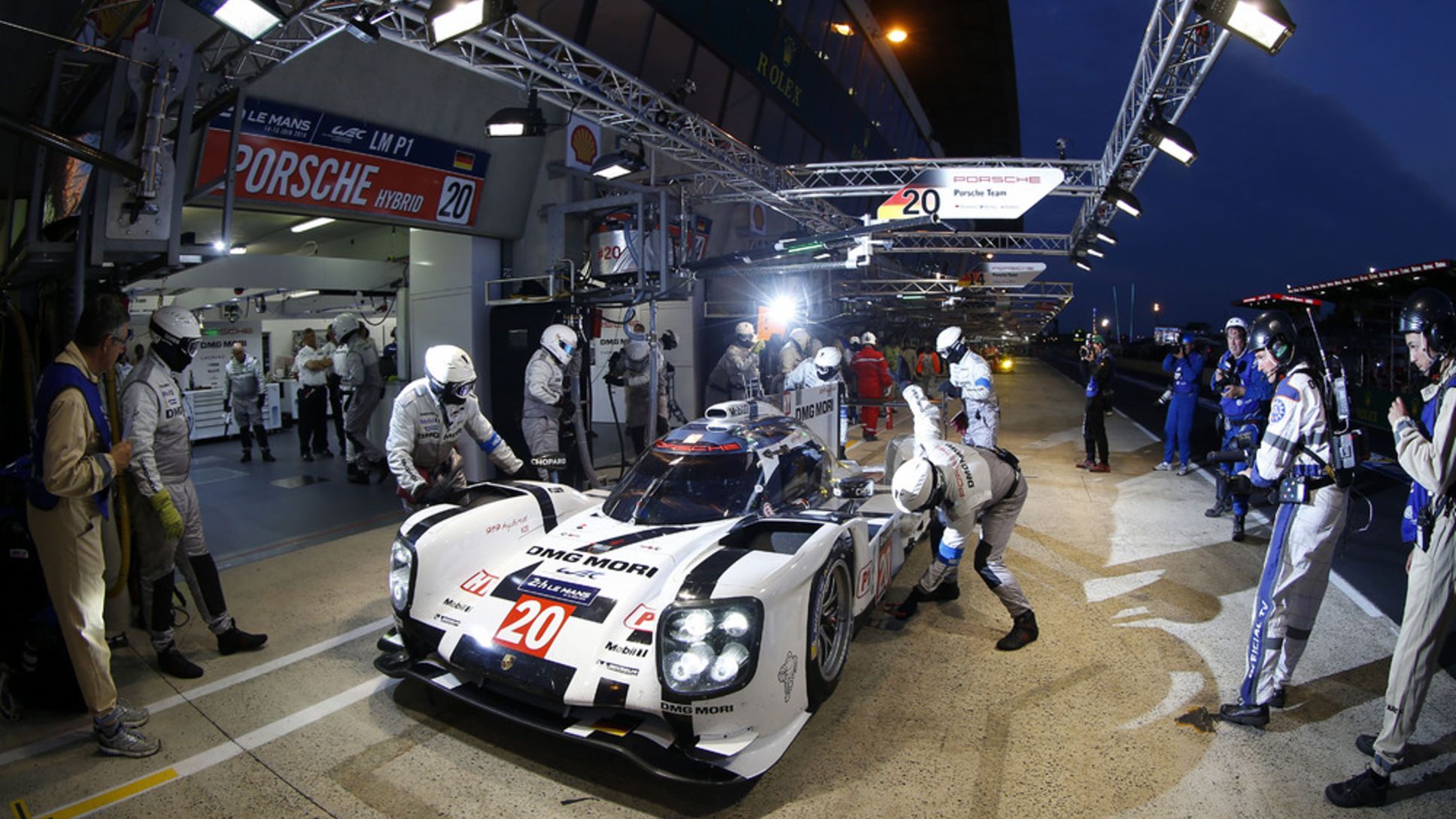 It came as a surprise to the Porsche Team when the two innovative 919 Hybrids came first and second in the first qualifying session for the Le Mans 24-Hours on Wednesday night. Porsche Team Manthey has also made a great start.

Brendon Hartley from New Zealand achieved the fastest overall lap time of 3mins 23.157secs, which put the number 20 car on provisional pole position. For the sister number 14 car Neel Jani (CH) secured second place with a time of 3mins 23.928secs. The qualifying session had originally been scheduled to last two hours, but was red flagged after 90 minutes because of an accident.

There are two more qualifying sessions to come today – 7pm to 9pm and 10 pm until midnight. In Le Mans the fastest qualifying lap achieved with each car counts for the grid position, which is different to the normal WEC procedure. However, for Thursday’s qualifying sessions the Porsche Team intends to limit the number of laps. In order to give the crew some rest on Friday before the start of the 24-Hours race at 3pm on Saturday, the Porsche Team will prepare the cars on Thursday for the marathon, and so doesn’t want to put too many miles on the parts to be used in the race.

Earlier today, the four hour free practice session, held from 4pm until 8pm, was technically trouble free for the Porsche Team. The trio in the number 20 car completed 35 laps with the fastest lap time being 3mins 26.602secs and came sixth. The sister number 14 car covered 43 laps, the fastest being 3mins 27.374secs, which meant seventh on the time sheets. The free practice session was red flagged for 50 minutes due to a heavy accident involving Loic Duval. The Porsche Team wishes the Audi driver a speedy recovery.

Porsche Team Manthey has also made a great start in the fight for the GT pole position at the Le Mans 24 hour race. In the first qualifying session for the 82nd edition of the world’s toughest automobile race, contested on 14/15 June as round three of the Sports Car World Endurance Championship WEC on the 13.629 kilometre Circuit des 24 Heures, the number 92 Porsche 911 RSR posted the third quickest time in the GTE-Pro class late on Wednesday evening. Sharing the cockpit of last year’s winning car are works drivers Marco Holzer (Germany), Frédéric Makowiecki (France) and Richard Lietz (Austria). At the wheel of the #91 Porsche 911 RSR, factory pilots Joerg Bergmeister (Germany), Patrick Pilet (France) and Nick Tandy (Great Britain) set the fifth quickest time.

As the best Porsche customer team in the GTE-Am class, Dempsey Racing Proton concluded the qualifying on the third spot. Sharing the cockpit of the number 77 Porsche 911 RSR are Americans Patrick Dempsey and Joe Foster with their compatriot and Porsche works driver Patrick Long.

Normally at the WEC races, two pilots must qualify a car, but in Le Mans only the fastest time of one pilot determines the starting position for the race.