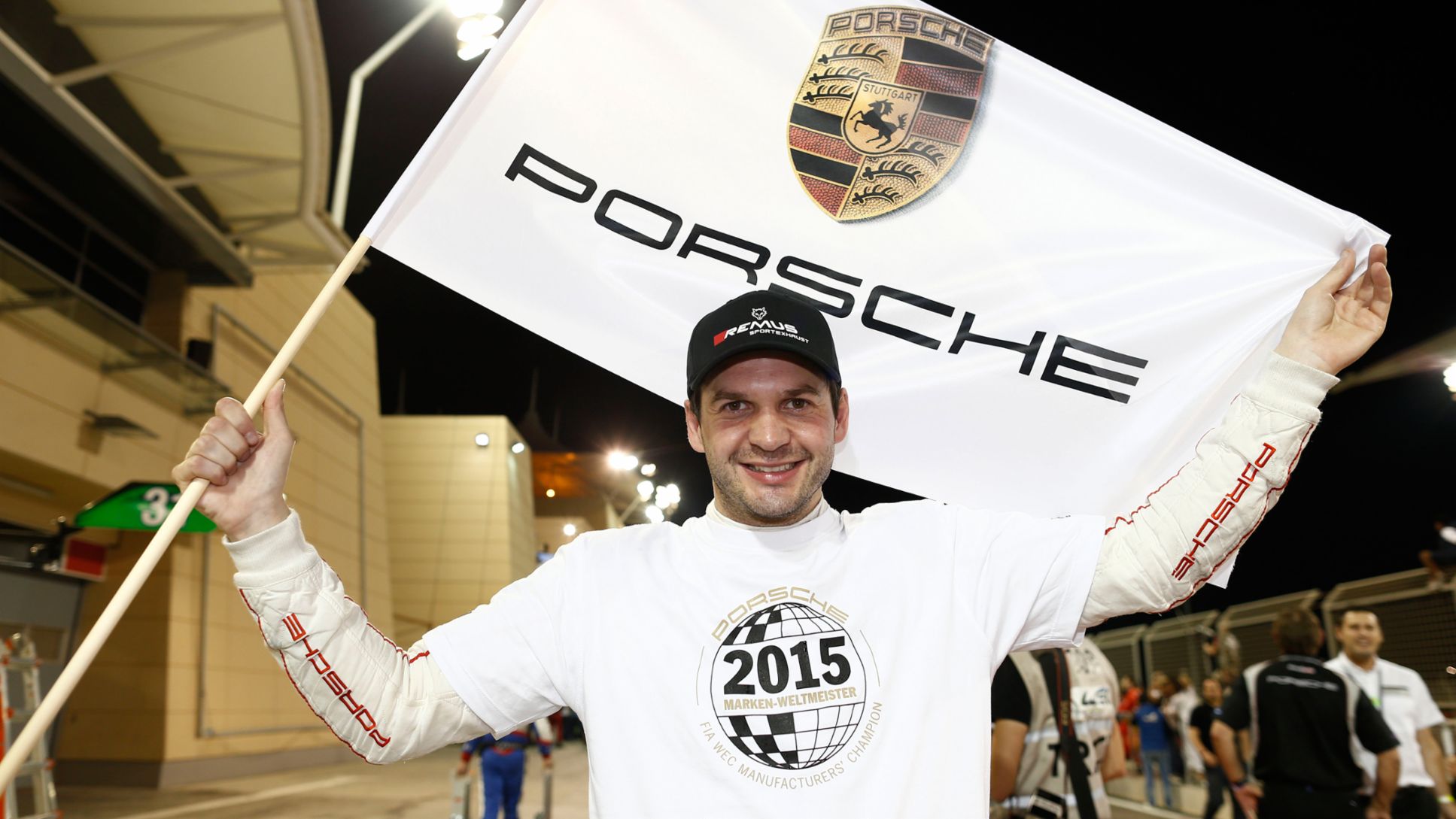 The Austrian has won the FIA World Endurance Cup for GT Drivers in Bahrain.

Richard Lietz will not forget this day in a hurry. Whenever he looks in the mirror over the next week, he will remember November 21, 2015 – the day he won the FIA Endurance World Cup at the six-hour race in Bahrain, the greatest success of his career. As soon as the best GT driver of the Sports Car World Endurance Championship WEC climbed out of his Porsche 911 RSR, the mechanics of his Porsche Manthey squad grabbed him and shaved the number “1” into his black hair.

“Even though I’ll have a lot of explaining to do when I get home, the boys were just having some fun, that was the most important thing at that moment,” said Richard Lietz, who will celebrate his 32nd birthday on 17 December. “This title is the well-deserved reward for us all for never giving up this season, even when we were hampered with setbacks. Even when we were at a low point at Le Mans, when many had already written us off, we always believed in ourselves. The way we made a comeback in the second half of the season was tremendous. You can only do this with such a team.”

“Richard is an absolute sure bet”

Richard Lietz had to wait for four races until he brought home his first victory of the season. Only at the Nürburgring, the home track of his Porsche Manthey team, did he make the breakthrough. Thanks to his win at the Eifel circuit in August, the Austrian took over the lead in the FIA World Endurance Cup; the fiercely-contested drivers’ classification of the Sports Car World Championship WEC. Afterwards at the overseas races, he made sure he never relinquished it.

“Richard is an absolute sure bet when it comes to being consistently fast, even under the most difficult conditions, and bringing home top results,” says Marco Ujhasi, Overall Project Manager GT Works Motorsport at Porsche. Although his driving style is perhaps unspectacular for onlookers, over the course of his racing career, Richard Lietz has celebrated great success in a vast range of racing series thanks to his speed and extreme consistency. He has covered virtually every discipline, and developed his driving skill on the rally tracks rather than on the racetrack. Because at 16 he was too young to contest rallies, he decided to enter the Formula BMW. Yet it was somehow logical that he should end up in motor racing: His grandfather Alfred contested hill-climb races driving a Porsche 550 Spyder, and his father competed in the Austrian rally championship. His brother, who was the first to congratulate him on Facebook after the Bahrain race for winning the title, is also an avid racer. And the fact that he met his partner Heidi at the Hungaroring fits the picture perfectly.

But it wasn’t just the family genes that prompted Richard Lietz to become a racing driver. The fact that he grew up far from any big city temptations in Ybbsitz, a 3500-strong community in the rural idyll in Lower Austrian Mostviertal, surely also contributed to this. “The opportunities for leisure activities for young people there are few and far between,” he says. “But we have beautiful, natural roads that are really fun to drive on. That’s why lots of racers come from our region.”

When Richard Lietz became a Porsche works driver in 2007 after turning heads with his strong performances in the previous years in the Carrera Cup and Supercup, a long awaited dream came true for him. He was grateful for the confidence that Porsche placed in him and devoted himself to paying Porsche back for this trust as soon as possible. It worked: First he won the GT2 class of the Le Mans 24 hour race, then he clinched overall victory at the International GT Open. In a very short time, he was regarded as one of the best GT pilots in the world. With these successes, expectations increased. But Richard Lietz, who likes to recharge his batteries by climbing and running, was always far away from losing touch with reality. On the contrary: He is not someone who takes himself too seriously, he is a positive person who always looks at himself first should a mistake be made. His teammate Michael Christensen, with whom he won three WEC races this season, says: “Richard is the best friend and teammate you could ever wish for.”

The Austrian is a man for all occasions

As cool and calm as Richard Lietz may appear to outsiders, when thing do not run to plan he can also become very emotional. He is definitely not someone who shies away from confrontation, and he takes on responsibility – not predominantly for his own advantage, but mostly in the interest of the matter. This makes him the perfect team-player. “Only when the environment is right,” he says, “can everyone give their best towards success.” The Porsche Manthey team is a perfect example: “With these guys you can really get where you want to go, every single one of them knows what has to be done. I’m proud to be a part of this team.”

The Austrian is a man for all occasions – and for all racing series: in 2009 he won the Le Mans Series (GT2 class) and defended this title the following year. In 2012 he clinched his first of two GT victories until now at the Daytona 24-hour classic, with two more Le Mans class wins following in 2013 and 2014. When Porsche scored its historic success with its first overall win at the US Petit Le Mans classic in October 2015, he was one of the winning trio. Porsche Head of Motorsport Dr. Frank-Steffen Walliser appreciates Richard Lietz for his down-to-earth qualities and his analytical thinking – and that he always sees the big picture, and not only because he stands 1.83 metres in height: “His world doesn’t stop at the end of the pit lane.” He is not only pleased with his strong performance on the racetrack, but also the great confidence that he enjoys with his teammates and how he brings this into the Porsche motor racing family: “When our drivers want to have something optimised, it is usually Richard who comes to me and we advice how we can implement it.”

A role model for many young Porsche pilots

Richard Lietz is a role model for many young Porsche pilots. Because he also received the final polish on his driving skills in the Porsche one-make series, which have once again proved an excellent launching platform for an international racing career, it is easy to understand why they identify with him. The same applies to Michael Christensen. When the seven years younger Dane talks about his teammate, he inevitably raves about him. “I can learn a great deal from Richard,” he says.

“Thanks to his vast experience, he knows what it takes to be successful. He understands how to get the team to pull together and work in one direction. It’s fascinating to watch how he does that.” The two also have a great understanding away from the track. When the Dane moved to Vienna two years ago, Richard Lietz gave him helpful tips on how to find somewhere to live. “From time to time we meet up for a coffee,” says Christensen. “It’s fun to hang out with Richard. We have a great time together.”

Greatest success in his career until now

For Richard Lietz, winning the FIA Endurance World Cup marks the greatest success in his career until now. The probability that it will change his personality is practically zero. “You can only win such a title when you have a strong team behind you, and that they want success as much as you do,” he claims. As much as he is thrilled with his own title win, he is also delighted that Porsche Manthey managed to win the team title in Bahrain. The only touch of melancholy was the fact that Michael Christensen could not share the distinction of being the world’s best GT driver. After all, they secured the three victories this season together. But because the Dane helped Porsche North America at their Tudor United SportsCar Championship mission in Spa parallel to the WEC races, Richard Lietz ended up with more points to his credit than his teammate. “Although the statistics say otherwise – my feeling says that I’ve won the title together with Michael.”

At the pinnacle of his career, which began in a kart in 1998 and ultimately led to Porsche via Formula BMW, the Austrian Rally Challenge and Formula 3, Richard Lietz has won several of the most important sports car racing in the world – and now he has added yet another top-league international championship with the WEC. He lives and loves what he does. When he hears other racing colleagues philosophise about a lack of motivation, he can only shake his head. “I don’t have to find additional motivation before a race,” he says. “Just to sit at the wheel of a Porsche and know that I am representing such a richly-storied marque on the racetrack was always motivation enough for me.” 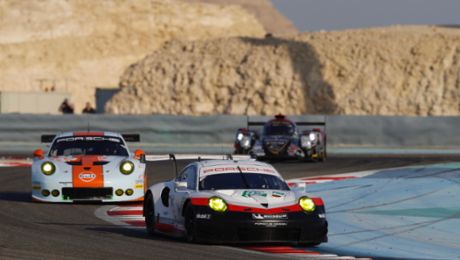 Bahrain: The title decisions in the GTE-Pro class of the Sports Car World Endurance Championship. 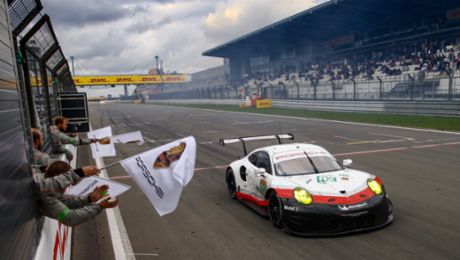 The Sports Car World Endurance Championship WEC goes down to the wire at the six-hour race in Bahrain. 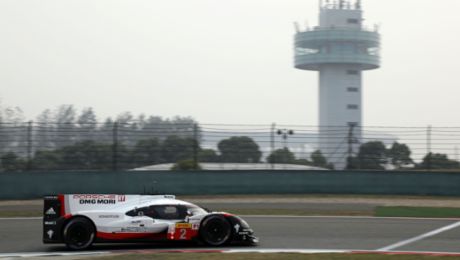 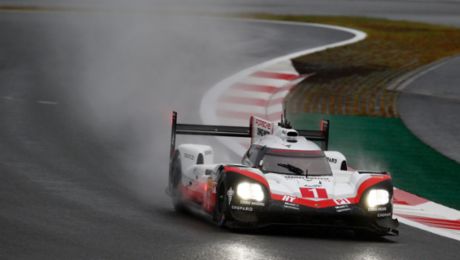 FIA WEC: The two Porsche 919 Hybrids were fastest in the morning practice session.