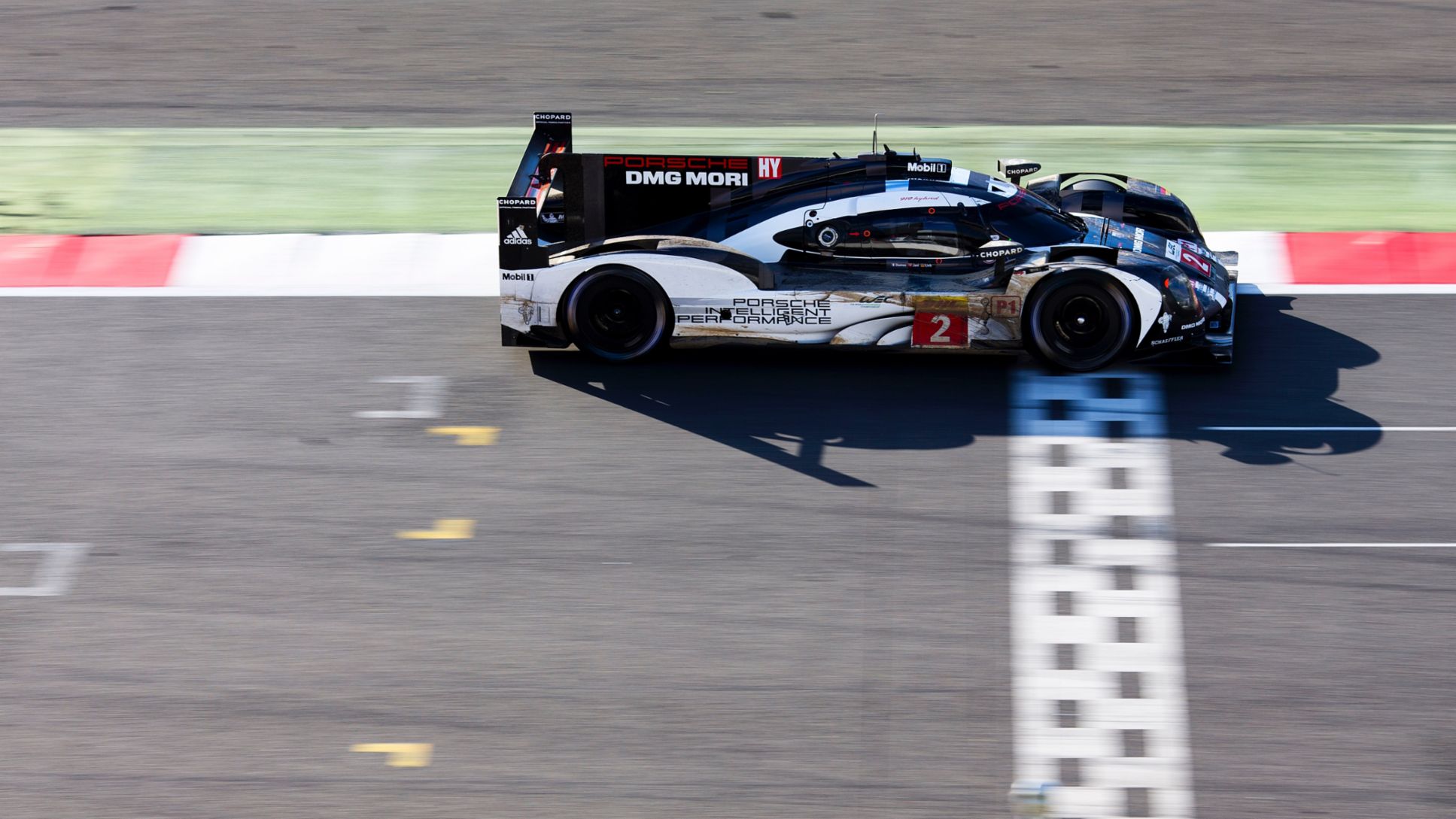 Action packed opening round in Silverstone

The 919 Hybrid crossed the finish line in second place – right behind the Audi R18. This car was disqualified retroactively by the FIA. Audi wanted to file an appeal but has now chosen not to.

All three manufacturers that are involved with class 1 Le Mans Prototypes – Audi, Porsche and Toyota – had trouble in the race. Porsche suffered the biggest drama when the number 1 car of reigning World Champions Timo Bernhard (DE), Brendon Hartley (NZ) and Mark Webber (AU) crashed after around two hours. Hartley touched a GT car when lapping it.

Both drivers walked away unhurt from what was a spectacular accident. After Silverstone saw rain and snow on the previous days, on Sunday the race start was in bright sunshine with the two 919 Hybrids of title defender Porsche lining up third and fourth on the grid for the first of nine World Championship rounds. By doing the fastest lap of the race (1:40.303 minutes) Neel Jani proved the competitiveness of the innovative hybrid race car.

Start driver Mark Webber is in P3 in the early laps, but then catches up to the leading Audis. Going into lap 7, he overtakes the number 8 Audi and improves to second. After 16 laps he gets by the number 7 Audi as well as taking the lead. After 27 laps he hands over to Brendon Hartley for a double stint. With a comfortable lead of 44 seconds ahead of Audi number 7, Hartley comes in for fuel and tyres after 55 laps. On lap 71 the race is over for the reigning World Champions, because of a heavy accident when lapping a GT car.

Start driver Romain Dumas is hunting the number 8 Audi, but remains in fourth place. After 26 laps he hands over to Neel Jani, who then comes in for fuel and tyres after 55 laps. As the Audis get into difficulties, Jani improves to second and on lap 58 the race positions show a one-two for Porsche. At the next pit stop after 71 laps Marc Lieb jumps in. The mechanics refuel, change the tyres and the front nose, which was damaged in traffic. After the sister car’s accident, car number 2 is leading the race. A full course yellow, caused by Audi number 8 having problems and stopping out on the track, ends on lap 76. At the restart Lieb gets involved in another battle and the number 7 Audi takes the chance to grab the lead.

After 102 laps Lieb hands the car back to Dumas. The safety car is on track to clear debris from a Toyota, caused by a damaged tyre. When the race goes green again after 106 laps, Dumas stays in P2. With 132 laps completed, Jani gets back into the car, which is still running second. After 161 laps the 919, that is again temporarily leading, comes in for fuel and has only the tyres on the left side changed to save time. When his hunt for the number 7 Audi is in full swing, one lap later he has to pit again, this time because of a puncture on the front right. After 187 of the final 194 laps he comes in for the last splash and dash and finishes second.

However, the post-event technical examination has now revealed a violation on the part of Audi – according to the report, the base plate of the car was too thin. As a result, the FIA commissioners disqualified the winning car.

For the four Porsche customer teams, the six-hour race in Silverstone, yielded some positive insights in the fiercely competitive GT field, despite some setbacks. In both the GTE-Pro and GTE-Am classes, the 470 hp 911 RSR, which is based on the seventh generation of the iconic 911 sports car, was running in the lead for long periods of time. With 30 minutes to the flag, the two nine-eleven contenders looked good for a podium finish on the storied British racetrack. But ultimately it proved not enough for a successful start to the season.

Richard Lietz (Austria), who won the FIA Endurance Cup last year as the best GT driver, got away well at the start in his 911 RSR fielded by Dempsey Proton Racing. When he handed the vehicle off to his teammate Michael Christensen, he was running second in the GTE-Pro class. The Dane managed to fend off spirited attacks from his pursuers – only to lose time in the pits with his 911 RSR. Although he eventually rejoined the race, he had lost too much ground to catch his rivals.

Right up until shortly before the finish, two 911 RSR contesting the GTE-Am class had excellent chances for podium spots. The 911 campaigned by Abu Dhabi Proton Racing was lying in second, with the 911 RSR of KCMG right behind. But they too were unable to maintain their positions to the flag. KCMG finally finished in fourth, with Abu Dhabi Proton Racing scoring fifth. Sixth place went to Gulf Racing. Like KCMG, Gulf Racing contested the WEC for the first time with a 911 RSR.

Dr Oliver Blume, Chairman of the board Porsche AG: “The race was thrilling right to the end. Highs and lows were close together – that’s racing. The season opener clearly proved the extremely high level of the World Endurance Championship. The tight competition between such different car concepts is fascinating and groundbreaking. Qualifying, as well as the race result, are extra motivation for us to be back on top again next time.”

Fritz Enzinger, Vice President LMP1: “We have an action packed weekend behind us. Qualifying wasn’t ideal for us and in the race we had various kinds of troubles, such as Brendon Hartley’s accident, and we are relieved he wasn’t hurt. In the end we had the puncture on car number 2. Nevertheless: congratulations to Audi. We came second, Toyota third – for the championship this is a great start to the season. The spectators can look forward to some very exciting racing. In Spa we will attack again.”