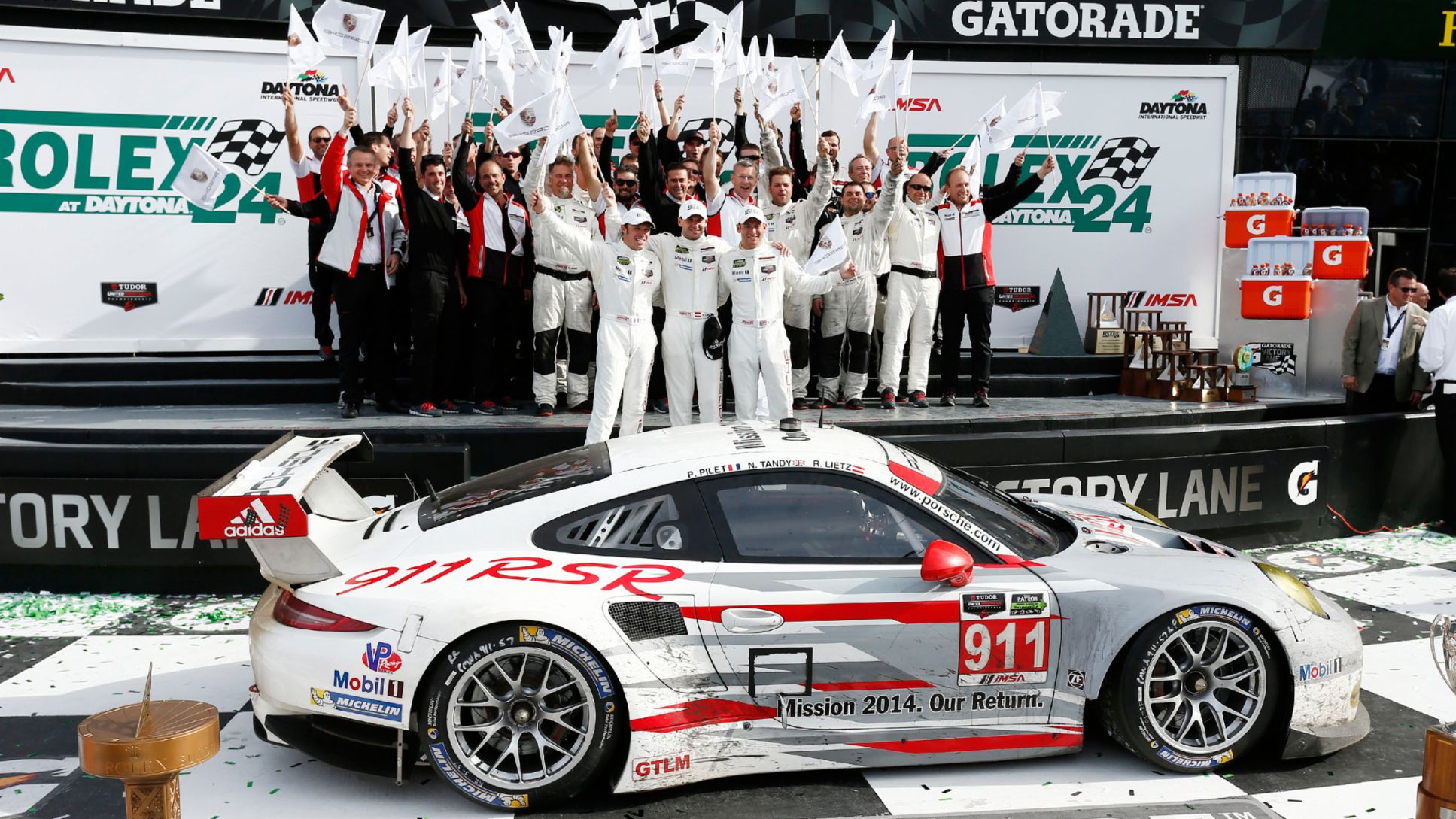 Petit Le Mans, the final round of the IMSA SportsCar Championship held on 1st October on the storied Road Atlanta racetrack, will be the last works-campaign for the Porsche 911 RSR.

Since its debut in 2013, this race car has contested a total of 72 races in the WEC Sports Car World Endurance Championship, the IMSA SportsCar Championship in the USA and Canada as well as the European Le Mans Series fielded by factory and customer teams – and secured 21 victories and eight championship titles. This makes the 911 RSR, which is based on the seventh generation of the iconic 911 sports car, the most successful GT race car of recent years.

“These were four intensive years with the 911 RSR on racetracks all over the world,” says Marco Ujhasi, Overall Project Leader GT Works Motorsport. “I’m incredibly proud of the entire project team, our tyre partner Michelin, and all the other partners who actively support us every day. Together, we have worked hard, we never gave up and we constantly came up with new ideas on how to assert ourselves in a competitive environment. The successes that the 911 RSR achieved against strong competition at major international sports car race series are the rewards for all our efforts. The 911 RSR is a success story in global GT motorsport.”

The maiden race of the 911 RSR, which is characterised by systematic lightweight design and sophisticated aerodynamics, celebrated its race premiere at Silverstone on April 14, 2013. At only its third outing, the 24 Hours of Le Mans, the successor to the 911 GT3 RSR celebrated a sensational double victory. Despite this victory, the Weissach specialists continued to work hard on further optimising the 911 RSR. At the last round of the year in Bahrain, the vehicle rolled to the grid bearing many modifications for 2014. In the acid test of competition, it became clear that the vehicle had made the eagerly-awaited great leap forward towards improved driveability.

During the 2014 season, the 911 RSR not only contested the Sports Car World Endurance Championship WEC but also the new IMSA SportsCar Championship contested throughout the USA and Canada. At the 24 Hours of Daytona, the 911 RSR caused a sensation with the Porsche North America squad kicking off the season with a victory. And at the 12 Hours of Sebring, the 911 RSR finished at the very front of the strongly-represented GT class. At Petit Le Mans, the last race of the season, the 911 RSR claimed victory with the customer team Falken Tire. Thus, in its first season in the USA, the 911 RSR had not only won the three most important long distance races in America, but Porsche had also taken home the manufacturers’ title of the IMSA SportsCar Championship and the North American Endurance Cup. The races at Daytona, Sebring, Watkins Glen and Road Atlanta count towards this prestigious long distance championship.

With a double victory at the opening round at Silverstone, the start into the WEC season also ran exactly to plan. In Shanghai the pair of 911 RSR also swept over the finish line in first and second in the GTE-Pro class. Parallel to this, the 911 RSR received various modifications to prepare it for the 2015 season. The revamped aerodynamics at the front and the adapted chassis kinematics ensured enhanced balance and improved control at its handling limits. Thanks to minor tweaks, the reliability of the drivetrain was further improved.

However, in the USA and also in the WEC it took some time to harvest the successes that ultimately turned 2015 into the most successful motorsport year for Porsche. In the second half of the 2015 season, the engineers had worked on the car to the point that it could make full use of its strengths. The handling of the 911 RSR was improved to such an extent that even customer teams with amateur race drivers could yield success. Patrick Dempsey is a perfect example of this: The Hollywood star and race driver celebrated his first WEC victory in the GTE-Am class at Fuji, Japan, driving for Dempsey Proton Racing. Another customer team, Gulf Racing, won the season opener of the European Le Mans Series in Silverstone.

The turning point of this season came at the Watkins Glen round of the IMSA SportsCar Championship. The first victory for the Falken Tire customer team proved to be a major boost for all Porsche squads. Suddenly, successes followed in the WEC as well, with victories at the Nürburgring, in Austin and Shanghai. And in the USA and Canada, the 911 RSR notched up one victory after the other, scoring three wins in a row at Bowmanville, Road America and Virginia. The 911 RSR crowned the season with overall victory at Petit Le Mans against all significantly more powerful and lighter sports prototypes.

It was Porsche’s first ever overall victory on the tradition-steeped Road Atlanta racetrack, and the first for a GT vehicle in the most important sports car racing series on the North American continent. This handed Porsche the GT championship titles for manufacturers, drivers and teams. At the same time, the victory at the finale in Bahrain on November 21, 2015, earned Porsche the same three GT championship titles in the WEC.

The successes of the 911 RSR

Over the course of its last factory-run season of 2016, the 911 RSR won the IMSA SportsCar Championship races on the Long Beach street circuit and in Austin. In the WEC, the Abu Dhabi Proton Racing customer team put the icing on the cake with the squad’s first victory in Mexico City. In the European Le Mans Series, the customer team Proton Competition won the race in Imola. At the last factory outing of the 911 RSR at Petit Le Mans, Porsche has excellent chances to secure the hotly contested North American Endurance Cup.

The successor to the 911 RSR is expected to make its race debut at the 24 Hours of Daytona on January 28, 2017, the traditional season-opening round of the IMSA SportsCar Championship. But until then there is still a great deal to do. “We have some busy months ahead of us,” says Marco Ujhasi. “However, I’m confident that we’ll line up on the grid with a worthy successor to the 911 RSR. The successes of the 911 RSR have set a very high benchmark for all involved. But we will work with great concentration and dedication in order to write yet another successful chapter in the history of Porsche GT motor racing.”