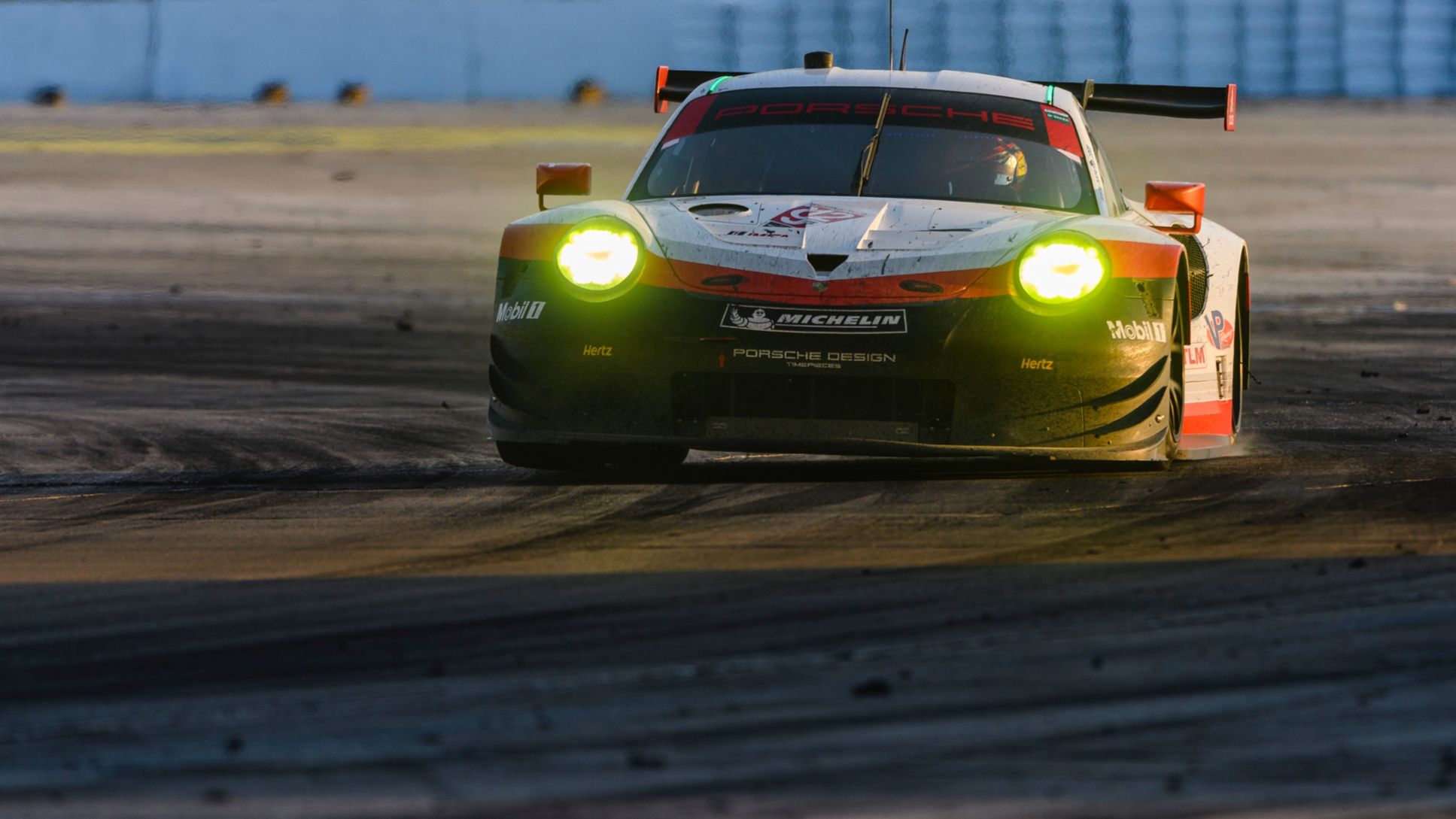 IMSA: Brilliant strategy and a lot of bad luck

At the 12 Hours of Sebring the new Porsche 911 RSR was on course for a podium result until shortly before the finish. Then, however, a tyre defect and a drive-through penalty put an end to Patrick Pilet’s spectacular charge.

In fact, thanks to a sound race strategy and a strong performance from the pilots, even a maiden victory was within reach. Then, however, a tyre defect and a drive-through penalty put an end to Patrick Pilet’s spectacular charge. The Frenchman had fought his way through the field in the 510 hp race car with the starting number 911 and was poised to snatch the lead. After 334 laps on the Sebring International Raceway, the legendary airfield circuit in the heart of Florida, the Porsche works driver and his teammates Dirk Werner (Germany) and Frédéric Makowiecki (France) ultimately had to settle for seventh place in the GTLM class. In the second 911 RSR fielded by the Porsche GT Team, Kévin Estre (France), Laurens Vanthoor (Belgium) and Richard Lietz (Austria) took the flag in eighth place.

The 65th edition of the 12 Hours of Sebring, which started in summer temperatures of over 25 degrees Celsius, treated fans to gripping racing from start to finish, particularly in the strongly represented GTLM class, which was packed with drama. Before the final pit stop the field was still running close together. Right up until this time, Porsche’s strategy to setup the 911 so that it would perform at its best in the cooler hours of the evening unfolded brilliantly. But during a tyre change, an impact wrench suddenly gave up the ghost, resulting in a longer pit stop than planned for the number 911 car. As a consequence, Patrick Pilet fell down the field from second to fifth place.

The Frenchman, who had started into the season with a second place with his teammates at the 24 Hours of Daytona, refused to give up. Putting in breathtaking overtaking manoeuvres and turning the fastest race lap, he battled his way up the order in a very short time to retake second place and was lying within striking distance of the leader. His spirited final charge, however, came to an abrupt end 33 minutes before the finish: Due to a tyre defect he had to come in for an unscheduled pit stop, and after the front left tyre was changed he then accelerated and drove over the hose of the impact wrench. The drive-through penalty that he received for this destroyed all hopes of clinching his second podium result of the season.

In the GTD class, the best Porsche 911 GT3 R finished on sixth place. One of the pilots driving Park Place Motorsports’ 500 hp customer sports racer, which Porsche had designed for worldwide GT3 series on the basis of the 911 GT3 RS production sports car, was Jörg Bergmeister (Germany). His works driver colleague Michael Christensen (Denmark), the class winner at Daytona with Allegra Motorsports, crossed the finish line in tenth place.

Dr Frank-Steffen Walliser, Head of Porsche Motorsport: “We witnessed a very dramatic race and up until 33 minutes before the end everything was looking good. We had a tough fight for first place with the Corvette but then suffered a slow puncture on the front left tyre. We had to pit and change the tyre and after that we could forget about victory. With our number 912 car, the unplanned pit stop due to a leaking damper cost us three laps and all chances of winning. This car was also running very well.”

Patrick Pilet (911 RSR #911): “Our plan was to have the best car at the end of the race. This meant that it wasn’t so easy driving during the heat of the day. But once it cooled down we were very clearly the fastest on the track. The team did an excellent job. The strategy had been perfect. After the last pit stop we had a good chance to win. The tyre defect was annoying. It wasn’t a pit crew error, it was just bad luck.”

Dirk Werner (911 RSR #911): “The pace of the car was very good and under normal circumstances it would have been enough to win here. Patrick was running in a very good position when he got the puncture. It’s hard to lose the fight for victory like this. Still, we had a great weekend and we put in a good race. The performance of the entire team was outstanding and we were so close to winning our first race.”

Frédéric Makowiecki (911 RSR #911): “It’s really disappointing. The team had done such a great job and we had a very good strategy. We knew that we would get stronger in the second half of the race when the temperatures cooled down, and that worked perfectly, too. Patrick’s flat tyre cost us the victory. That was just simply unfortunate.”

Kévin Estre (911 RSR #912): “It was a tough race. Our car had the pace to run with the leaders. The track worked better for us in the second half of the race when it got cooler. Unfortunately we then had the problem that cost us three laps. We were able to make up one of those laps, but we couldn’t do any more than that.”

Laurens Vanthoor (911 RSR # 912): “Our pace was very good. Unfortunately we lost three laps because of a leaky damper. Because there were comparatively few caution phases, we weren’t able to make up much ground in the final hours.”

Richard Lietz (911 RSR # 912): “Sebring is merciless, but we knew this beforehand. We had a good car and I enjoyed driving here with my teammates. We did our very best but unfortunately we had the problem with the rear left damper. Things like this can happen, particularly on a bumpy circuit like this one. We were well prepared, we did a great deal of testing here in Sebring, but sadly it ultimately wasn’t enough for a better result.”

Round three of the IMSA SportsCar Championship is held on the street circuit in Long Beach/California on 8 April.