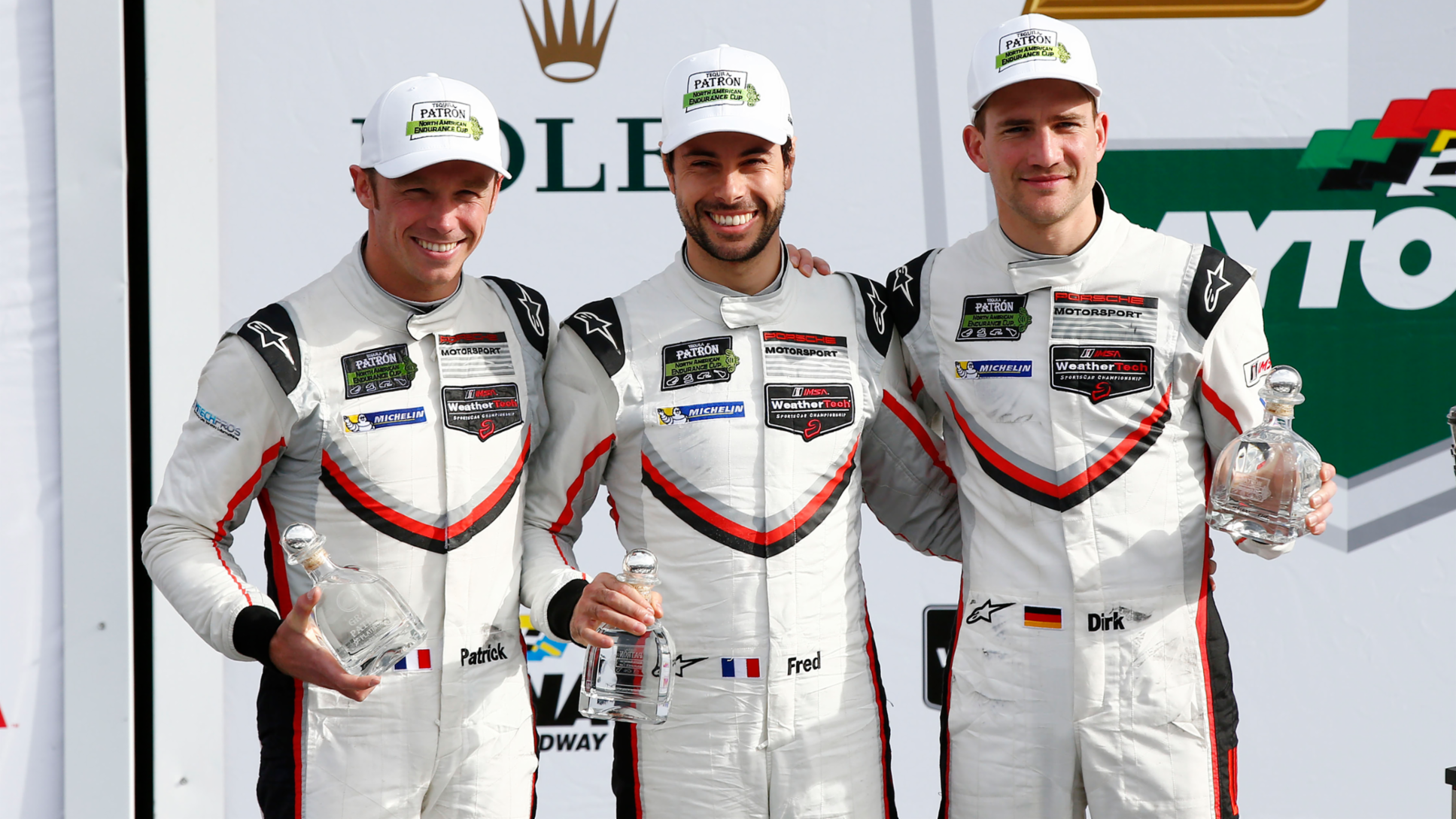 A successful race debut for the new Porsche 911 RSR at the 24 Hours of Daytona: After 634 laps on the demanding Daytona International Speedway, they were just 2.988 seconds shy of claiming victory. However, a win at the season-opening round of the IMSA SportsCar Championship was celebrated by the Porsche customer team Alegra Motorsports: With the Porsche 911 GT3 R and supported by Porsche factory pilot Michael Christensen (Denmark), the squad won the GTD class. For Porsche, this was the 77th class victory at the world famous long distance classic in Florida.

The 55th running of the Daytona 24-hour race proved tremendously challenging for drivers and teams, especially during Saturday night with steady rain and unusually cool temperatures. The race was repeatedly interrupted by safety car phases after many pilots lost control of their vehicles on the rain-soaked Daytona International Speedway and ended up trackside. The longest of the 21 safety car phases behind the pace car lasted over two hours. In the early hours of Sunday morning, the race director made the decision for safety reasons due to the flooding on the racetrack. More than two hours – even the safety car ran out of fuel.

In the first race hours on the storied racetrack featuring two fast banked corners and a twisty infield, the 510 hp 911 RSR racers, designed from scratch by Porsche Motorsport in Weissach, lost time and positions due to six unscheduled tyre changes. After the problem with the right front tyres was solved by further optimising the setup, both 911 RSR began to re-establish their rhythm. When heavier rain made conditions even more difficult, they fought their way to the top of the GTLM class and led the field over many laps on the 5.729-kilometre-long Speedway. Sports car fans did not let the bad weather spoil their fun and witnessed breathtaking fights for positions over the entire race distance, with constantly changing cars in the leader.

The #912 vehicle ultimately took the flag in sixth place

The race showed that the level of competition in the GTLM class is enormous. None of the vehicles of the five automobile manufacturers contesting this category could build a convincing lead over the course of the race. When the sun came up on Sunday, the field was as close as it had been the night before. Both 911 RSR had turned consistently fast laps to secure a good starting position, only to have an unscheduled pit stop for repairs on the right front suspension throw the #912 vehicle out of contention for a podium spot. Kévin Estre (France), Laurens Vanthoor (Belgium) and Richard Lietz (Austria) ultimately took the flag in sixth place. However, their team colleague Patrick Pilet crowned his impressive final stint after an ongoing four-way battle with Ford, Ferrari and Chevrolet with a well-deserved second place. Thanks to this result, he secured a good position for Porsche in the North American Endurance Cup, for which the long distance classics of Sebring, Watkins Glen and Petit Le Mans in addition to Daytona count.

In the GTD class, the Porsche 911 GT3 R mounted with the new ultra-modern, four-litre, flat-six engine with direct fuel injection, celebrated its first victory at Daytona one year after its race debut. With a spectacular charge through the field in the last hour of racing, Porsche works driver Michael Christensen swept into the lead with the 500+hp racer fielded by the Alegra Motorsports customer team and held onto the spot to the flag. Porsche had designed the customer sports racer for worldwide GT3 series on the basis of the 911 GT3 RS production sports car. After securing overall victory at the 14 Hours of Dubai on 14 January, the 911 GT3 R has now won the second major long distance race of the season.

Dr Frank-Steffen Walliser, Head of Porsche Motorsport: “That was an incredible race and a great debut for our new 911 RSR. We were only two seconds off victory after 24 hours, but that doesn’t matter in this case. It was an extremely tough race, a fantastic fight for victory. Despite the bad weather conditions, the fans were treated to everything that makes racing so exciting. Both 911 RSR made it to the finish well and without any real problems. Alegra Motorsports’ victory with the 911 GT3 R in the GTD class was the icing on the cake. We’re particularly thrilled by the fact that the youngest and most inexperienced crew has won, with excellent support from our factory driver Michael Christensen. This Daytona result is a fine achievement.”

Marco Ujhasi, Overall Project Manager GT Works Motorsport: “I’m incredibly proud of my boys. The entire team spent 18 months giving their utmost so that we could tackle this race with a competitive car. Whether in Weissach, with our tyre partner Michelin, or with our squad, every single person did everything they could. Today we reaped the rewards for this. It was an extremely gripping race to the finish. In the beginning we had some slight problems with the tyres because we first had to find out where our limit was with the setup for the decisive final phase. But we never gave up and we fought back. The fighting spirit shown in the team made this possible. I’m incredibly proud of our works driver squad. They are our greatest asset. These guys don’t make any mistakes and always deliver top performances.”

Patrick Pilet (911 RSR #911): “That was a typical Daytona race. I knew that not a lot would happen in the first 20 hours and the decision always goes down to the wire. That’s why I didn’t take too many risks, and didn’t fight for every position come what may. I possibly made some team member nervous by taking this approach, but I knew exactly how things work here. Then during the last two hours I pulled out all stops and squeezed every last ounce out of the 911 RSR. Now I’m pleased. It was the maiden outing for our new car and the one little drawback was that we didn’t win. Still, it was an important step. Now I’m looking forward to Sebring.”

Dirk Werner (911 RSR #911): “That was a very emotional race for me; my first as a Porsche works driver. It certainly wasn’t for the fainthearted, particularly in the final phase. Patrick really gave everything he had and a couple of times I thought he might even win. But only a fraction was missing at the flag. Still, it was virtually a perfect race. The team worked really well together and the potential of the new 911 RSR makes us very optimistic. I take my hat off to the people who developed this car.”
Frédéric Makowiecki (911 RSR #911): “Congratulations to the entire team. What a great start to the season. The time that was invested in developing the new 911 RSR has paid off. The concept is good and it works. Of course not everything ran smoothly today, but we never gave up and we always fought back. One thing is certain – we’re back in the game.”

Kévin Estre (911 RSR #912): “That was a really cool race. Seven cars within ten seconds after 24 hours – you don’t get that very often. We were there when it counted, but not quite enough to have a say in the fight for victory. The whole team did their utmost. Daytona was just the beginning.”

Laurens Vanthoor (911 RSR # 912): “Daytona was my first race for Porsche, my first with the 911 RSR and the first in the USA. Everything actually went well, even though there’s room for improvement as far as the result goes. But I didn’t make any mistakes and that’s important. I wasn’t totally happy with my performance, I can do better, but I still have a bit of time. The car has potential and that makes me optimistic for the rest of the season.”

Richard Lietz (911 RSR # 912): “That was a great debut for the new 911 RSR. The car ran almost perfectly, the entire squad again worked together like clockwork. This gives Porsche a great foundation for the rest of the season. Now I’m curious to see how we perform at Sebring.”

Michael Christensen (911 GT3 R #28): “That was a fantastic weekend. I’m amazed that my team performed so brilliantly at their first race with the 911 GT3 R – and in Daytona of all places against such strong competition in the 27-strong field in the GTD class. My final stint was definitely one of the best in my career. I knew what was at stake for the team, I didn’t want to damage the car, and I’m thrilled that we were able to achieve this fantastic result together.”

Round two of the IMSA SportsCar Championship is the 12 Hours of Sebring contested on 18 March in the US state of Florida.

The IMSA SportsCar Championship is a sports car race series contested in the USA and Canada, which was run in 2014 for the first time. The series was formed from the merger of the American Le Mans Series and the Grand-Am Series. Sports prototypes and sports cars start in four different classes: GTLM (GT Le Mans), GTD (GT Daytona), P (Prototype) and PC (Prototype Challenge). The Porsche 911 RSR runs in the GTLM class, with the Porsche 911 GT3 R contesting the GTD class. 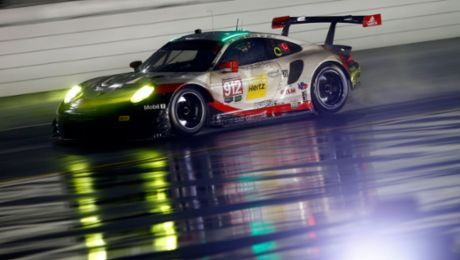 IMSA: Status reports from the race at the 24 Hours of Daytona. 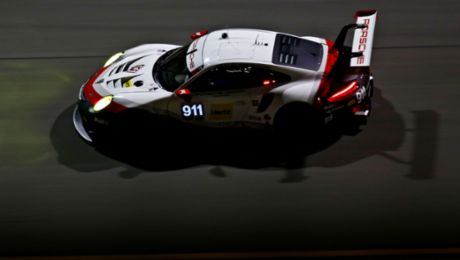 The Porsche team is ready for Daytona 24 Hours.

Porsche has announced the new driver lineup for the 2017 season.