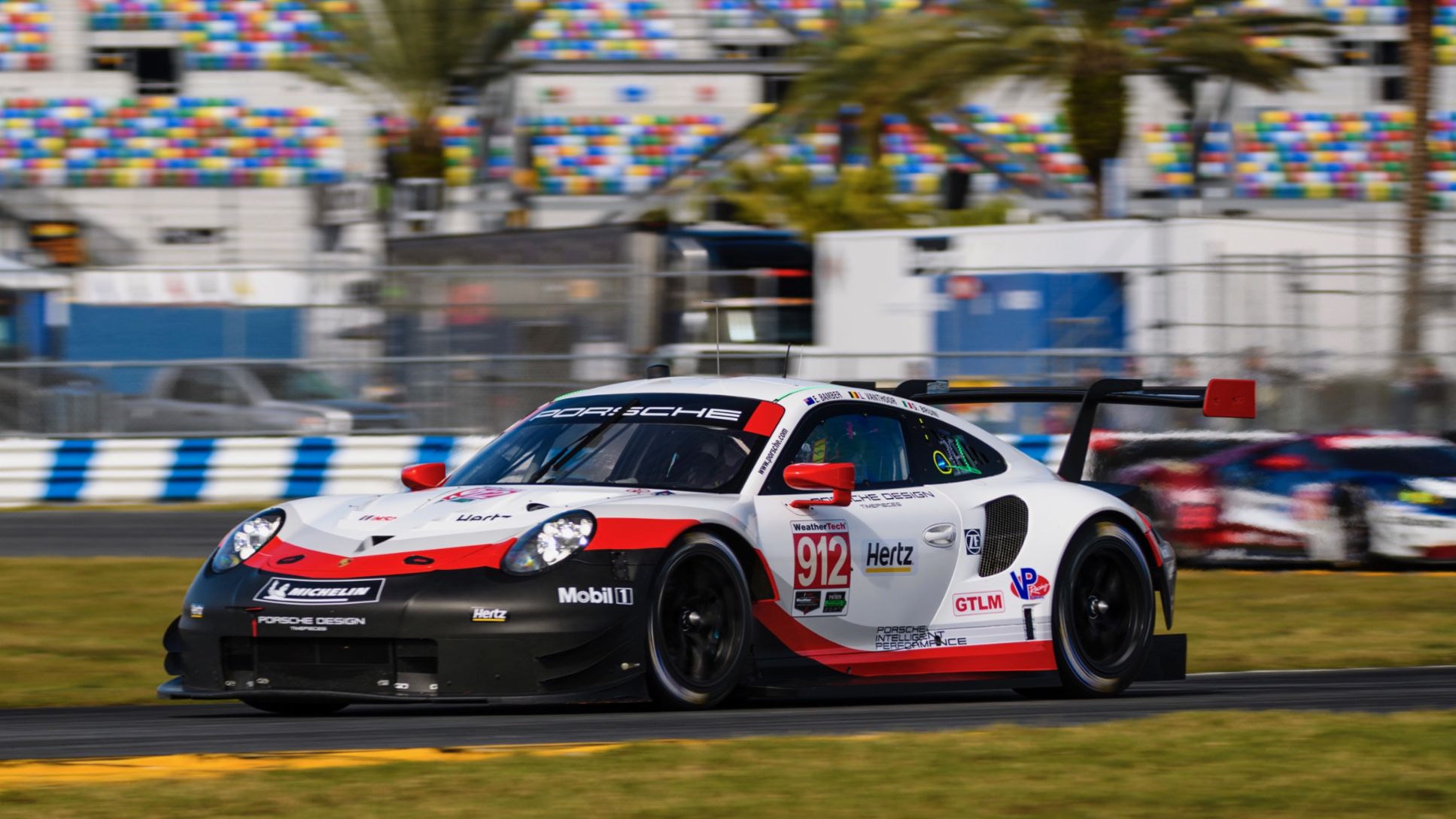 Porsche celebrates a very special anniversary at the 24-hour race at the Daytona International Speedway.

It is 50 years since Vic Elford, Jochen Neerpasch, Rolf Stommelen, Jo Siffert and Hans Herrmann, at the wheel of the 907LH (Longtail), claimed the first of 22 overall victories for Porsche at the world-famous endurance race in Florida. As the most successful manufacturer in the history of this prestigious race, Porsche will once again be strongly represented at the 56th edition on 27th/28th January. The Porsche GT Team will field two 911 RSR at the opening round of the IMSA SportsCar Championship. The number 911 and 912 cars from Weissach will face stiff opposition from BMW, Chevrolet, Ferrari and Ford in what is traditionally the most fiercely-contested category – the GTLM class. Three 911 GT3 R will be run by Porsche customer teams in the GTD class. In total, nine works drivers and two Young Professionals will be in action for Porsche.

The 24 Hours of Daytona is the first highlight of the 2018 motorsport year. Porsche has expanded its global commitment to GT racing this season, and has made organisational changes to allow this. Pascal Zurlinden takes over from Marco Ujhasi as the new Director GT Factory Motorsports. His predecessor will work closely with Porsche Digital GmbH in the future in his role as Project Manager Digitisation Motorsport. Sebastian Golz takes over project management of the 911 GT3 R, including works-assisted outings in the Intercontinental GT Challenge, Blancpain Endurance Series, and the Nürburgring 24 Hours.

“I would like to thank Marco Ujhasi for the extremely successful work he did on developing the 911 RSR works team,” said Dr. Frank-Steffen Walliser, Vice President Motorsport and GT Cars. “This success was crowned with victories at the 24-hour races in Daytona and Le Mans, as well as title wins in the WEC and IMSA – not forgetting Porsche’s first overall victory at the Petit Le Mans. I wish him all the best and every success for his new digital challenge.”

Daytona is the heart of US motorsport. Together with Le Mans, the 24-hour race is one of the most famous endurance races in the world. 50 cars, with drivers from a wide range of global racing series, will line up at the 5.729-kilometre Daytona International Speedway – an ultra-modern motorsport arena with two steep, fast bends and a tight infield.

Driving duties in the 911 RSR with the start number 911 will be shared by Patrick Pilet (France), Le Mans winner Nick Tandy (Great Britain) and Frédéric Makowiecki (France). Two-time Le Mans winner Earl Bamber (New Zealand), Laurens Vanthoor (Belgium) and Gianmaria Bruni (Italy) will alternate at the wheel of the Porsche GT Team’s number 912 car. Porsche will also provide a number of drivers to support customer teams, as they take on the challenge of Daytona armed with the 911 GT3 R. Patrick Long (USA), Young Professional Mathieu Jaminet (France) and Christina Nielsen (Denmark), the “Porsche Selected Driver 2018”, will drive for Wright Motorsports (#58). Sven Müller (Germany) and Young Professional Matteo Cairoli (Italy) will be in action for Manthey-Racing (#59). Jörg Bergmeister (Germany) is one of the regular drivers for Park Place Motorsports (#73) again this season.

The 911 RSR made its successful race debut in Daytona in 2017. As well as set-up optimisations, the reliability of the car has been improved again for 2018. The rear-mounted engine generates about 375 kW (510 hp), depending on the size of the restrictor. The particularly large rear diffusor, in combination with the rear wing with “swan neck” mounts, creates greater aerodynamic efficiency and improved downforce. The 911 GT3 R won the GTD class in Daytona in 2017. Porsche used the 911 GT3 RS production sports car as the basis for the powerful customer sports car, which generates over 368 kW (500 hp) and is intended for use in global GT3 series. An evolution package is available to teams this season.

No other manufacturer has enjoyed as much success in Daytona as Porsche. As well as 22 overall victories, Porsche also has a record 77 class wins to its name. The latest of these came in 2017, when Michael Christensen (Denmark) won the GTD class in the 911 GT3 R. With five overall victories (1973, 1975, 1977, 1979 and 1991) and a class win in 1972 to his name, US racing legend Hurley Haywood is the most successful Porsche driver in Daytona.

Dr Frank-Steffen Walliser, Vice President Motorsport and GT Cars: “Starting the season with a 24-classic like Daytona is a very special challenge for the teams and drivers. However, we are as well prepared as possible to lay the foundation for a successful year of motorsport in 2018 at this iconic race, which attracts fans from all over the world. As the most successful manufacturer in the history of this race, Porsche has enjoyed some of its biggest wins here. Continuing this run of unforgettable victories against such impressive opposition is a very strong motivation for the Porsche GT Team with the 911 RSR, as well as for our customer teams with the 911 GT3 R.”

Pascal Zurlinden, Director GT Factory Motorsports: “We have prepared well for the season-opener in Daytona. Even at the test, our drivers were able to take to the demanding track with another optimised set-up. After the long break from racing, we have also been able to run through the processes within the team under competitive conditions. Despite all the preparation, starting the season with a 24-hour race is still a huge challenge – but one we are looking forward to.”

Sebastian Golz, Project Manager 911 GT3 R: “After last year’s hard-fought win in the GTD class, our customer teams travel to Daytona with high expectations. We have developed an evolution package for the 911 GT3 R for them, which will be used for the first time in Daytona. The integration of flicks on the front axle allows a more stable aerodynamic balance in the set-up. The modified air routing in the engine hood ensures better heat management within the powertrain at high temperatures.”

Patrick Pilet (911 RSR #911): “It is always important to get the season off to a good start. Particularly when the race is a classic, like Daytona. Victory against strong opposition and the top drivers from a wide range of racing series is the best possible reward for all the work that the team and driver have invested in preparations over the winter – and an incredible boost for the rest of the season. We were runner-up last year. This time, we are looking to go one better.”

Nick Tandy (911 RSR #911): “I enjoy being back in the USA. Some of my biggest successes have come here with the 911 RSR. Daytona is a great race and the start of a season, which we go into with very high expectations. Victory in Daytona is also always a big statement to the opposition. Even with the best possible preparation, it is never easy to win at this demanding circuit. We will do our best.”

Frédéric Makowiecki (911 RSR #911): “A 24-hour race is always rather special. It is a highlight for drivers and fans alike – exciting, exhausting, and sometimes a bit crazy. Daytona is a real classic, one of those races that every racing driver would like to win at some point in their career. We certainly have a good chance with the 911 RSR. We are hungry to take that chance.”

Earl Bamber (911 RSR #912): “It is fantastic to be back in the USA with Porsche. I have had a very good and successful time here in the past. Daytona is one of the most famous races in the world, an exciting start to the season, at which everyone must reveal their cards. I am looking forward to driving with Laurens for the first time this season. We have had some fierce battles as rivals in Macau and Sepang. I am sure we can achieve great things this season as team-mates in the 911 RSR and with a strong team behind us. It would be nice to start with a win in Daytona.”

Laurens Vanthoor (911 RSR #912): “When I came to Daytona for the first time last year, I was like a kid on his first day at school. I did not know the circuit, the race or the IMSA SportsCar Championship. That is all different now. I know what it takes to be among the front-runners in races in this fiercely-competitive championship. I hope, with this experience, that we can put ourselves in a good position in the title race in Daytona.”

Gianmaria Bruni (911 RSR #912): “Daytona is always one of the biggest challenges in our sport. I am looking forward to competing at this endurance classic as a Porsche works driver for the first time. There is a lot of responsibility, given the countless successes that Porsche has achieved in Daytona. We did some very good testing with the 911 RSR here, and I can hardly wait for the race to get started.”

Patrick Long (911 GT3 R #58): “I won the World Challenge with Wright Motorsports in 2017. I now hope that, with my experience, I can help the team to a good result in Daytona too. You cannot afford to get caught up in battles for position in this race. Sometimes, you have to take a step back and look after your car. It is important to be well placed as the race enters the final few hours and victory is at stake.”

Mathieu Jaminet (911 GT3 R #58): “I am looking forward to my first Daytona. This race is something very special. I familiarised myself with the demanding track at the test. I have been made to feel very welcome by the Wright Motorsports team and my team-mates. Patrick Long, in particular, knows Daytona like the back of his hand. He has given me a few valuable tips.”

Sven Müller (911 GT3 R #59): “Last year, I drove my first race as a Porsche works driver in Daytona. That was a very emotional moment for me. I am pleased to be returning with Manthey-Racing again. We were very good and quick with our 911 GT3 R at the test. I hope we can back up that good performance in the race itself.”

Matteo Cairoli (911 GT3 R #59): “This race, which I drove in for the first time in 2017, possesses an incredible fascination. What goes on here all week, both on and off the track, is as exciting for a young racing driver as the first visit to Disney World. We have prepared well with Manthey-Racing. I can hardly wait to finally get going.”

Jörg Bergmeister (911 GT3 R #73): “Only those who are among the front-runners at the season-opener in Daytona will have a chance of winning the championship against such strong opposition. However, that will not be easy. This race has been, and remains, one of the really big challenges in our sport. I have won it three times, but still look forward to it every year. The fascination is unique.”

The IMSA SportsCar Championship is a sports car racing series, which has been held in the USA and Canada since 2014. It was formed by merging the American Le Mans Series and the Grand-Am Series. Sport prototypes and sports cars start in three different classes: GTLM (GT Le Mans), GTD (GT Daytona) and P (Prototype). The Porsche 911 RSR competes in the GTLM class, the Porsche 911 GT3 R in the GTD class.

* These races count towards the North American Endurance Cup.