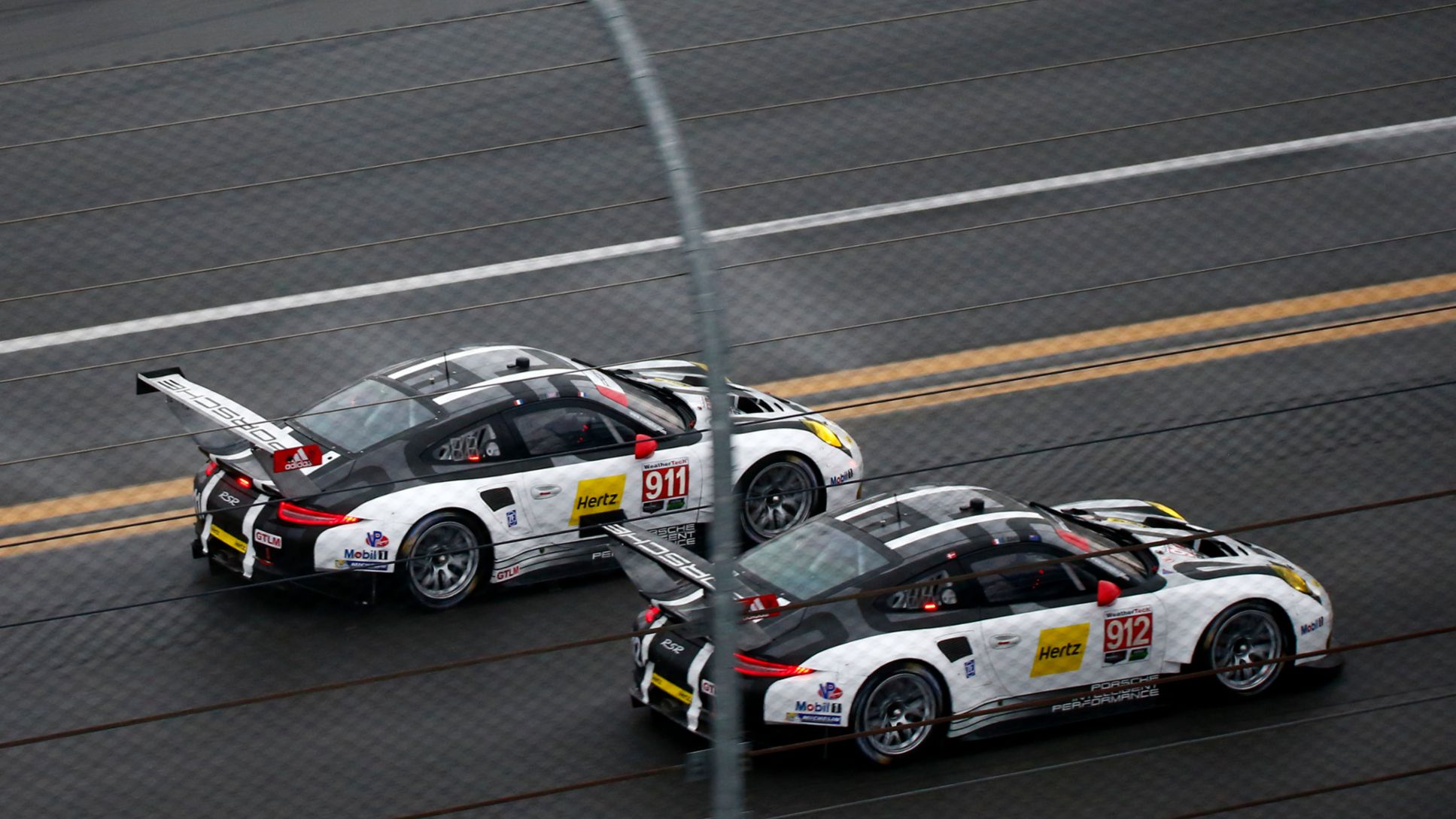 The IMSA SportsCar Championship heads into the new season on 30/31 January with the 24 Hours of Daytona. Porsche celebrates a double debut at the 54th running of the sports car classic in Florida.

The new Porsche 911 RSR and the new Porsche 911 GT3 R contest their first races on the Daytona International Speedway. The Porsche North America works squad campaigns the 911 RSR in the GTLM class, with the 911 GT3 R fielded by customer teams in the GTD class. Porsche’s track record at Daytona includes 22 overall and 76 class victories, making Porsche the most successful manufacturer in the history of this prestigious race.

Next to Le Mans, Daytona is the greatest long distance classic in international motor racing. The 24-hour event is held on the 5.729-kilometre Daytona International Speedway, one of the most famous racetracks in the world. Combining the original oval and the infield, the circuit includes twelve turns, two of them banked.

The 911 RSR received not only a new factory finish for the 2016 season. The 470 hp winning racer from Weissach, which is based on the seventh generation of the iconic 911 sports car, received modifications to the aerodynamics to comply with the new regulations. The position of the rear wing was moved further to the back, with the rear diffuser now considerably larger. Moreover, the 911 RSR received a modified front spoiler lip as well as wide side sills. The new 911 GT3 R celebrates its race debut at Daytona mounted with the new ultra-modern four-litre flat-six engine with direct fuel injection. Porsche built the 500 hp customer sport racer, based on the 911 GT3 RS production sports car, for GT3 series worldwide. In developing the vehicle, the engineers at Weissach paid special attention to lightweight design, better aerodynamic efficiency, reducing consumption as well as improved handling.

The first of 22 outright victories for Porsche at Daytona went to Vic Elford, Jochen Neerpasch, Rolf Stommelen, Jo Siffert and Hans Herrmann in 1968 with the Porsche 907. The most recent overall win in 2010 went to Joao Barbosa, Terry Borcheller, Ryan Dalziel and Mike Rockenfeller with the Porsche-Riley. In the traditionally very competitive GT classes, Porsche has notched up a record 76 wins. 2014 yielded the most recent victory with Richard Lietz, Nick Tandy and Patrick Pilet clinching GTLM class honours.

Dr Frank-Steffen Walliser, Head of Porsche Motorsport: “Porsche has celebrated some of its greatest wins at Daytona. For this reason, it is the perfect place to present two new GT racing cars from Weissach for the first time to sports car fans from all over the world. With the 911 RSR, on which we’ve made aerodynamic improvements to fit the new regulations, we aim to defend the IMSA championship title in the GTLM class that we won last year and at Daytona we want to perform much better than we did in 2015. With the 911 GT3 R, we’ve provided our customer teams in the USA with a competitive car for the GTD class. We’re very interested to see how the new cars perform at their race premiere.”