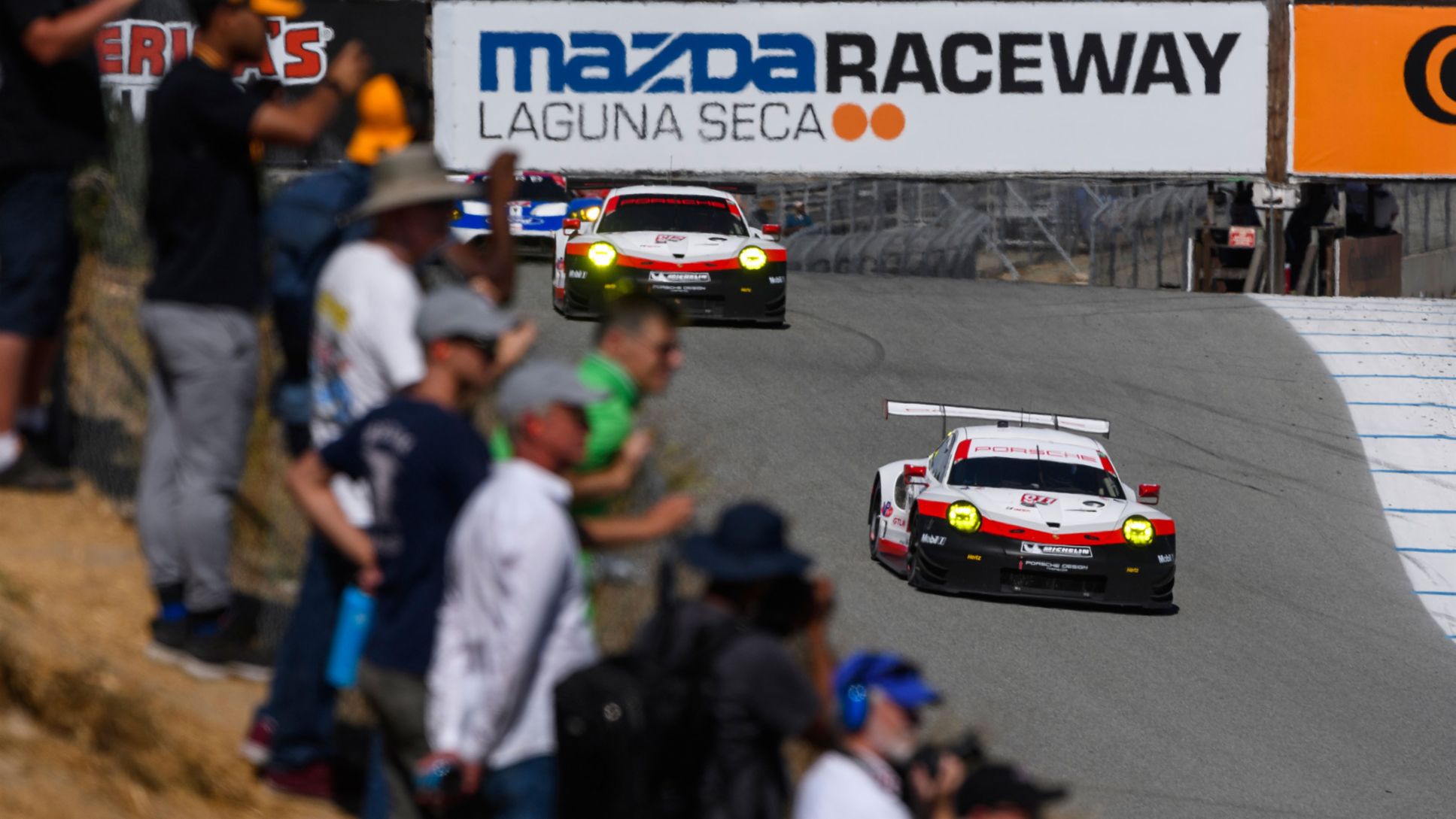 The Porsche GT Team is ready to tackle the Petit Le Mans season finale and fight for the prestigious North American Endurance Cup on 7 October: At the Laguna Seca Raceway in the dunes of Monterey, the new Porsche 911 RSR has clinched its fifth podium result in the IMSA SportsCar Championship.

In July, the car had won the Lime Rock round. At the wheel of the newly developed race car from Weissach, Patrick Pilet (France) and Dirk Werner (Germany) secured third in the GTLM class on Sunday on the 3.061-kilometre racetrack in California. After a gripping finale, they crossed the finish line only five seconds behind the winners. Their teammates Laurens Vanthoor (Belgium) and Gianmaria Bruni (Italy) in the sister 911 RSR took the flag in seventh place.

Laurens Vanthoor got the best start of the entire field. In the first lap, he promptly overtook three rivals in his #912 Porsche 911 RSR to settle into fifth place behind Patrick Pilet, who had managed to gain two places. The Frenchman then launched a spectacular pursuit for the top spot, first overtaking a BMW, then a Ford. After a good half hour he was running in second place. Laurens Vanthoor was poised to follow his lead, but a prototype’s careless manoeuvre not only blocked him from overtaking, but also threw him back three positions. With his teammate Gianmaria Bruni having to serve a drive-through penalty in the pits due to a non-compliant pit stop, the fight for top results continued without them.

Last round of the IMSA SportsCar Championship on 7 October

In the #911 Porsche 911 RSR, however, Dirk Werner was on course for a podium spot. The fuel-saving strategy that his team had worked out for him after he took over the cockpit from Patrick Pilet eventually began to pay off. For long stretches he was running in third, and he even managed to advance to second place. At times he was less than a second off the leader, and in a thrilling final phase defended his position with a spirited duel against his strongest pursuers. However, shortly before the flag he had to let a Ferrari overtake him. Nevertheless, it was enough for the winner of the Lime Rock race and the second-place getter at the Daytona 24-hour classic to bring home another podium result at the penultimate race of the season.

Third place also went to the 911 GT3 R fielded in the GTD class by the Porsche customer team Park Place Motorsports, thanks to Porsche factory driver Jörg Bergmeister (Germany), who put in a sprint through the field in the last hour of racing. With his teammate Patrick Lindsey (USA), Bergmeister won the Lime Rock round this season.

The new Porsche 911 RSR, which was designed and built by Porsche Motorsport in Weissach, is based on the seventh generation of the iconic 911 sports car and is the most spectacular Porsche 911 of all time. It celebrated its race debut in January 2017 at the 24 Hours of Daytona in the USA. The 510 hp race car is a totally new development. With the predecessor model, Porsche won the GT championship titles for manufacturers, drivers and teams in both the Sports Car World Endurance Championship and the IMSA SportsCar Championship in 2015.

Marco Ujhasi, Director GT Factory Motorsports: “This podium at an exciting and highly competitive race is thanks to a good strategy and a 911 RSR that proved consistently fast on this demanding racetrack. The fact that we focused on preparing for the race during our days here rather than on fast lap times in qualifying proved to be the right decision. With this result under our belt we can now head to Atlanta. There, we’ll do everything at the season finale to finish two positions further up the field – and win the coveted North American Endurance Cup for Porsche.”

Patrick Pilet (911 RSR #911): “That was really close. In the end it was a pure game of chance with the fuel. We assumed that the leading BMW would have to pit, but he kept going. Dirk saved as much fuel as he could, but he couldn’t keep up with the Ferrari, which was following a different strategy. We did the best we could with what we had today, and, as always, we’ve enjoyed wonderful support from our team.”

Dirk Werner (911 RSR #911): “It’s great to head home from Laguna Seca with a podium result. The entire team threw themselves completely into this race and improved the car even more. It was a fiercely competitive race, and fans really got their money’s worth. In the closing phase we all tried to conserve fuel and turn our laps without having to make a pit stop. My fuel light came on shortly before the flag, so that strategy worked perfectly. I think this is a great achievement for the team.”

Laurens Vanthoor (911 RSR #912): “We had a great car for the weekend and a great tyre strategy. Unfortunately we couldn’t turn it into a better result. We had a chance for the podium spot, but we made mistakes. We’ll now look closely at what happened and we’ll be back in the fight at the season finale at Road Atlanta.”

Gianmaria Bruni (911 RSR #912): “We had pretty much everything going against us in this race. Our 911 RSR had the speed to run at the front, but bad luck struck and we made mistakes. Now we need to concentrate totally on Petit Le Mans and on winning the North American Endurance Cup for Porsche.”

Jörg Bergmeister (911 GT3 R #73): “The podium result is good, however we could have achieved even more today. At our last pit stop a mechanic injured his back, so the tyre change took longer and we lost several positions. Now I’m looking forward to Petit Le Mans.”

Petit Le Mans is the last round of the IMSA SportsCar Championship and the North American Endurance Cup. It will be contested on 7 October at Road Atlanta in Braselton in the US state of Georgia.

The new Porsche Mobil 1 Supercup season kicks off this weekend as support to the Monaco Grand Prix.