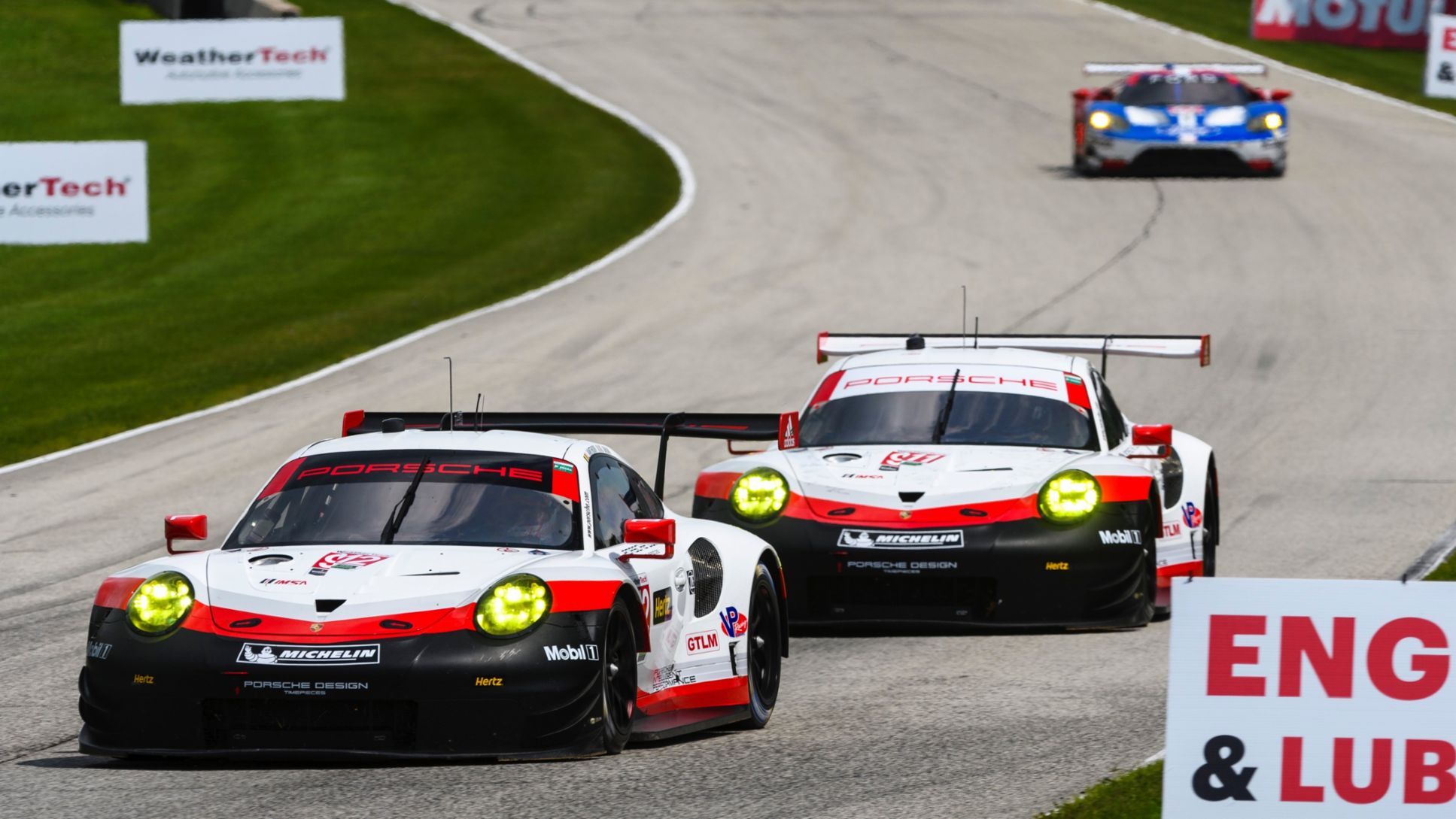 The race car, which faces strong competition in the fiercely contested GTLM class, was completely redesigned by Porsche Motorsport in Weissach based on the high-performance 911 GT3 RS sports car. On 22 July at Lime Rock, the racer scored its maiden victory. Porsche’s customer teams are also strongly represented on the tradition-steeped 5.263-kilometre racetrack close to Danville in the US state of Virginia, campaigning four 911 GT3 R in the GTD class. Like at Lime Rock, the prototypes will not contest the third to last race of the season, which means that overall victory will definitely go to a GT vehicle.

Porsche legends Hurley Haywood and Peter Gregg occupy a very special place in the eventful history of the Virginia International Raceway: When the first ever IMSA GT race was contested on the circuit in 1971, they won in the Porsche 914-6 GT. As a consequence of the oil crisis, the racetrack on the North Carolina state border closed its gates in 1974. It reopened in 2000 as the first motorsport venue in the USA with full resort facilities such as hotels, restaurants and a wide range of activities for racing fans and their families.

The 911 RSR is a completely new development and is campaigned by the Porsche GT Team in both the IMSA SportsCar Championship and the Sports Car World Endurance Championship WEC. Depending on the size of the restrictor, the motor, which is now positioned in front of the rear axle, puts out around 375 kW (510 hp). The level of downforce and the aerodynamic efficiency were significantly improved. The 911 GT3 R, mounted with the ultra-modern four-litre, flat-six engine with direct fuel injection, was designed by Porsche for worldwide GT3 series on the basis of the 911 GT3 RS production sports car. The more than 368 kW (500 hp) customer sports racer kicked off the 2017 season with a class victory at the 24 Hours of Daytona.

Dr Frank-Steffen Walliser, Vice President Motorsport and GT Cars: “Gripping races with innovative race cars on a storied racetrack such as in Virginia, which has retained its charm and character over the years, are what make the IMSA SportsCar Championship so incredibly appealing. And fans really get their money’s worth, especially with the GT classes. After a heart-stopping sprint to the finish at Road America recently, our 911 RSR was only six-tenths of a second off claiming our second win of the season. The fight for honours in Virginia will definitely be just as tough. However, this time we’re aiming for a better ending for us.”

Marco Ujhasi, Director GT Factory Motorsports: “Precision is what’s needed on the Virginia International Raceway. The drivers are advised not to stray from this beautiful, typically American racetrack onto the grass of the run-off areas, because it’s really difficult to save the cars. Normally at this time of year it’ very hot with high humidity. This makes things even more demanding for everyone. It’s not easy finding a perfect setup for this track, but we’re confident that we’re well prepared for this race.”

Sebastian Golz, Project Manager GT Customer Motorsport: “There are no paved areas next to the track. One minor error and two wheels over the white line at the Virginia International Raceway means you’ll very likely take a trip into the greens. There’s a very fine line between a fast lap time and losing traction. The 911 GT3 R won at Lime Rock and came second at Road America. Our customer teams are fully prepared to continue this series of successes in Virginia.”

Patrick Pilet (911 RSR #911): “I have fond memories of this storied racetrack deep in the heart of the America: In 2015 we celebrated a double victory there with Porsche. It’s an old school circuit with many fast curves where you can’t afford to make one mistake. If you end up on the grass, you might as well drive straight back to the pits to get the radiator cleaned. And you won’t be able to make up the time you’ve lost. I’m keen to see how our new 911 RSR performs on this demanding track.”

Dirk Werner (911 RSR #911): “In Virginia things get really serious in the fight for the championship. At this stage you can’t give away any points, otherwise you lose contact with the frontrunners for the final stage. We’ve never race the new 911 RSR in Virginia. For this reason, we’ll start with a baseline setup, which we’ll then modify from session to session. And the tyre choice on this unforgiving racetrack will also play a decisive role.”

Laurens Vanthoor (911 RSR #912): “Racing the new 911 RSR on this fantastic racetrack will definitely be great fun. I’m very much looking forward to it and to build on our good performances from Lime Rock and Elkhart Lake, where we finished second at both events. Perhaps we’ll manage to bring home our first win of the season from Virginia.”

Gianmaria Bruni (911 RSR #912): “This is a new race for me. I’ve never competed on the Virginia International Raceway, but I’ve heard a lot of positive things about this demanding racetrack from my teammates. It would be awesome if we could perform strongly there like we did recently at Lime Rock and Road America.”

Patrick Long (911 GT3 R #28): “I am looking forward to rejoining Alegra Motorsports and Daniel Morad after a successful race together at Lime Rock. We are hoping the twist-and-turn nature of VIR will complement the 911 GT3 R. This season the GTD class has been very, very competitive and we will do our best to continue forward with the momentum for the team and manufacturer championships.”

Jörg Bergmeister (911 GT3 R #73): “The Virginia International Raceway is one of the racetracks in the United States that I particularly enjoy. It’s fast and challenging and every tiny mistake costs you time. I love such tracks. The team at Park Place Motorsports were elated with our win at Lime Rock Park. I hope that this euphoria will buoy us along to clinch another podium result in Virginia.”

The “Balance of Performance” applies to the GTLM class of the IMSA SportsCar Championship. “BoP” was introduced by the IMSA with the aim of achieving a level playing field for the different vehicle concepts in this famously competitive class, and thus ensure balanced and fair races. It should not make a fundamental difference if a vehicle is powered by a turbocharged or normally aspirated engine, or if the engine is mounted on the front axle or in front of the rear axle. The basic aerodynamic shape of the vehicles should also not play a decisive role. After an initial grading by the IMSA, the performance data of the vehicles are acquired during the races via telemetry – not only lap times but, for example, acceleration profiles and engine mappings. This data input is then analysed and incorporated into the “BoP”. The most frequently used means of adjusting the performance level is through adding or subtracting weight as well as increasing or limiting the engine output through a restrictor or boost. In keeping with the rule-makers’ intention, the key to success on the racetrack is not about the individual potential of a vehicle, instead it’s about the performance of the drivers, the race strategy, a perfect setup or the skill of the team with their pit stops.

The IMSA SportsCar Championship is a sports car race series contested in the USA and Canada, which was run in 2014 for the first time. The series was formed from the merger of the American Le Mans Series and the Grand-Am Series. Sports prototypes and sports cars start in four different classes: GTLM (GT Le Mans), GTD (GT Dayto- na), P (Prototype) and PC (Prototype Challenge). The new Porsche 911 RSR runs in the GTLM class, with the Porsche 911 GT3 R contesting the GTD class.