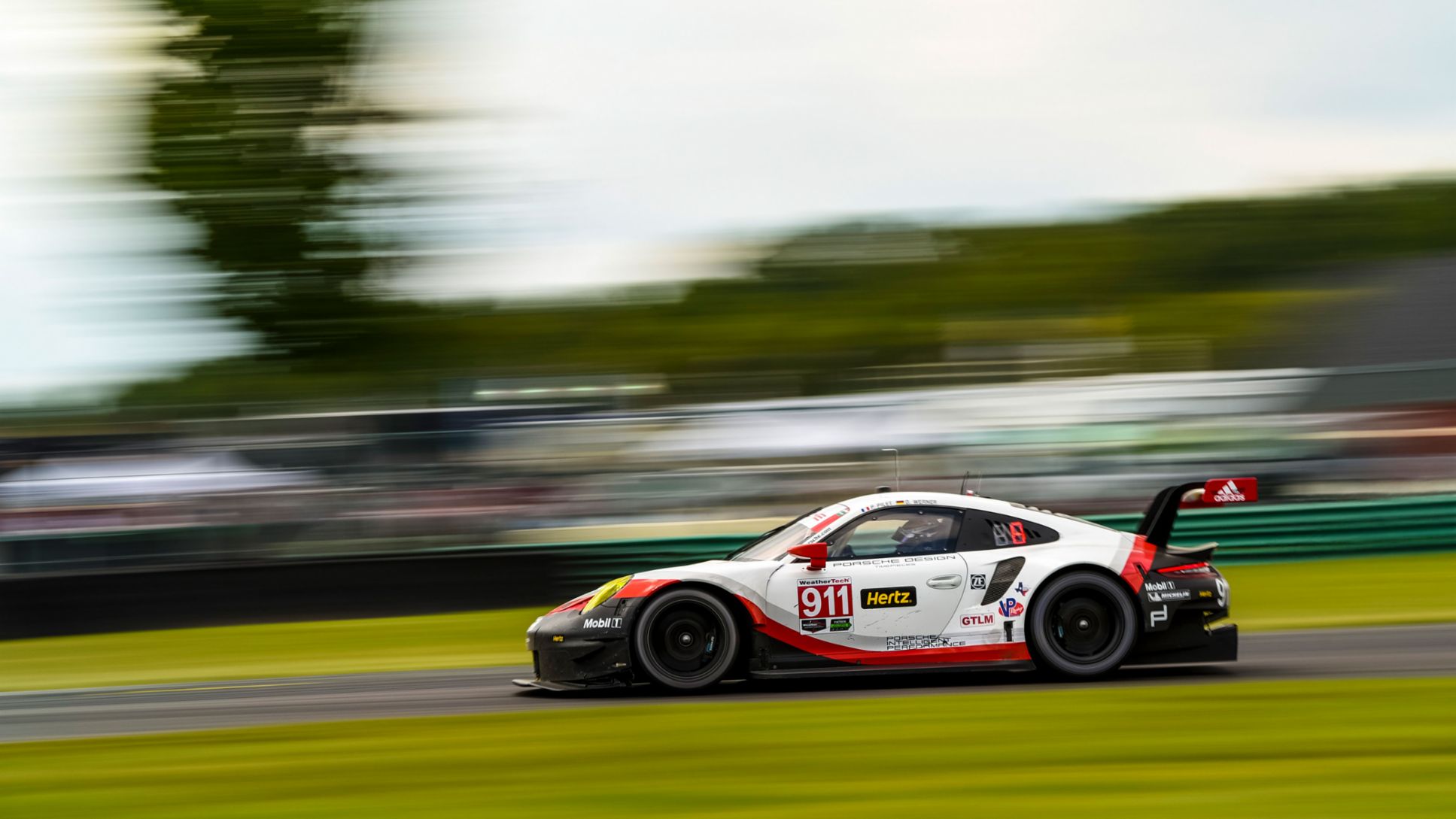 The IMSA SportsCar Championship goes west: With the race on the Laguna Seca Raceway in California on 24 September, North America’s premier sports car race series turns onto the finish straight of the season.

The Porsche GT Team tackles the fiercely contested GTLM class on the 3.601-kilometre circuit through the dunes of Monterey with two Porsche 911 RSR race cars. On 22 July at Lime Rock, the racer developed by Porsche Motorsport scored its maiden victory. Porsche customer teams again campaign the 911 GT3 R in the GTD class at the penultimate race of the season.

The Laguna Seca Raceway is close to Monterey, a coastal city on Highway 1 between San Francisco and Los Angeles. The circuit’s trademark is its unique corkscrew corner, which winds steeply downhill from the highest point of the track and is often compared to the daunting Eau Rouge corner at Spa. The city achieved world fame thanks to the legendary Monterey Pop Festival, where Jimi Hendrix, The Who, Janis Joplin and Jefferson Airplane performed in 1967. The festival is regarded as the musical beginning of the hippie movement.

The Porsche 911 RSR is a completely new development based on the high-performance 911 GT3 RS sports car: the suspension, body structure, aerodynamic concept, engine and transmission have all been designed by Porsche Motorsport in Weissach from scratch for this season. Depending on the size of the restrictor, the motor, which is now positioned in front of the rear axle, puts out around 375 kW (510 hp). The 911 GT3 R, mounted with the new ultra-modern, four-litre, flat-six engine with direct fuel injection, was designed by Porsche for worldwide GT3 series on the basis of the 911 GT3 RS production sports car. This season, the 368+kW (500 hp) customer sport racer celebrated victories at Daytona and Lime Rock.

The 2:40-hour race at the Laguna Seca Raceway takes off on Sunday, 24 September, at 14.05 hrs local time (23.05 hrs CEST). Outside the USA, the race is broadcast live on www.imsa.com. On pay-TV, the race can be watched live on Motorsport.TV.

Dr Frank-Steffen Walliser, Vice President Motorsport and GT Cars: “The race at Laguna Seca is traditionally one of the season highlights. We want to build on the strong performance and successes of our new 911 RSR at Lime Rock and Road America. And a top result would give the whole team an additional boost heading to Petit Le Mans, the final race of the season at Road Atlanta. There, we want to win the North American Endurance Cup with our new 911 RSR. This is the prestigious long-distance competition of the IMSA SportsCar Championship.”

Marco Ujhasi, Director GT Factory Motorsports: “We’ve always contested the Laguna Seca round in May. In September the temperatures will be a little cooler. We’ll adapt to the conditions. Laguna Seca is one of the racetracks where the slightest mistake costs a lot of time. The highlight is of course the corkscrew. You don’t find such a passage anywhere else in the world. Our drivers are looking forward to the challenge.”

Sebastian Golz, Project Manager GT Customer Motorsport: “The circuit is characterised by one corner after the other. The drivers need to be extremely alert. We’re very curious to see how our customer teams use the strengths of the rear-engine concept when braking for the corners and the traction advantage when accelerating out. We already saw that Laguna Seca suits the 911 GT3 R racer in 2016, when it scored its first win in the IMSA SportsCar Championship.”

Patrick Pilet (911 RSR #911): “Laguna Seca is one of the most beautiful racetracks in the USA. We’ve secured a lot of great results there with Porsche, but we’ve never won. We want to change that with the new 911 RSR, but it’ll be hard work. The rollercoaster track is very demanding. The key to success here are the tyres and finding a good compromise with the vehicle setup.”

Dirk Werner (911 RSR #911): “Laguna Seca is worth the long trip to the west coast of the United States. It’s a fantastic racetrack with a great history and it’s located in a very charming area. It’s a lot of fun driving there. The circuit should suit our 911 RSR. I hope that we’ll be able to show our Porsche fans in California what our car is capable of.”

Laurens Vanthoor (911 RSR #912): “I’ve never actually raced at Laguna Seca before. I only know the circuit from computer games that I played as a kid. I’m now looking forward to competing there with the 911 RSR. It’ll definitely be a very interesting experience.”

Gianmaria Bruni (911 RSR #912): “Laguna Seca is one of the races I really look forward to. I like California and the atmosphere at this unique racetrack. The races there are almost always really thrilling. And I’m expecting another tough battle for victory there this time, too. I hope that we’ll be part of that fight with the 911 RSR.”

Patrick Long (911 GT3 R #28): “Laguna Seca has something magical about it. I live in California, so this is one of my home races. The racetrack through the dunes is fantastic, but it has its pitfalls. When the wind blows sand onto the track, the conditions can change from one lap to the next. That makes it difficult, but at the same time appealing.”

Jörg Bergmeister (911 GT3 R #73): “When racing drivers talk about Laguna Seca, it’s always about the famous Corkscrew. It’s a tricky corner like Eau Rouge in Spa. You approach it in fifth gear at 210 kph and suddenly you’re looking at the sky. When you turn in, you can’t see a thing and you don’t know what’s ahead. It’s a huge challenge every lap to negotiate this corner perfectly.”

The “Balance of Performance” applies to the GTLM class of the IMSA SportsCar Championship. “BoP” was introduced by the IMSA ​​with the aim of achieving a level playing field for the different vehicle concepts in this famously competitive class, and thus ensure balanced and fair races. It should not make a fundamental difference if a vehicle is powered by a turbocharged or normally aspirated engine, or if the engine is mounted on the front axle or in front of the rear axle. The basic aerodynamic shape of the vehicles should also not play a decisive role. After an initial grading by the IMSA, the performance data of the vehicles are acquired during the races via telemetry – not only lap times but, for example, acceleration profiles and engine mappings. This data input is then analysed and incorporated into the “BoP”. The most frequently used means of adjusting the performance level is through adding or subtracting weight as well as increasing or limiting the engine output through a restrictor or boost. In keeping with the rule-makers’ intention, the key to success on the racetrack is not about the individual potential of a vehicle, instead it’s about the performance of the drivers, the race strategy, a perfect setup or the skill of the team with their pit stops.

The IMSA SportsCar Championship is a sports car race series contested in the USA and Canada, which was run in 2014 for the first time. The series was formed from the merger of the American Le Mans Series and the Grand-Am Series. Sports prototypes and sports cars start in four different classes: GTLM (GT Le Mans), GTD (GT Dayto- na), P (Prototype) and PC (Prototype Challenge). The new Porsche 911 RSR runs in the GTLM class, with the Porsche 911 GT3 R contesting the GTD class.