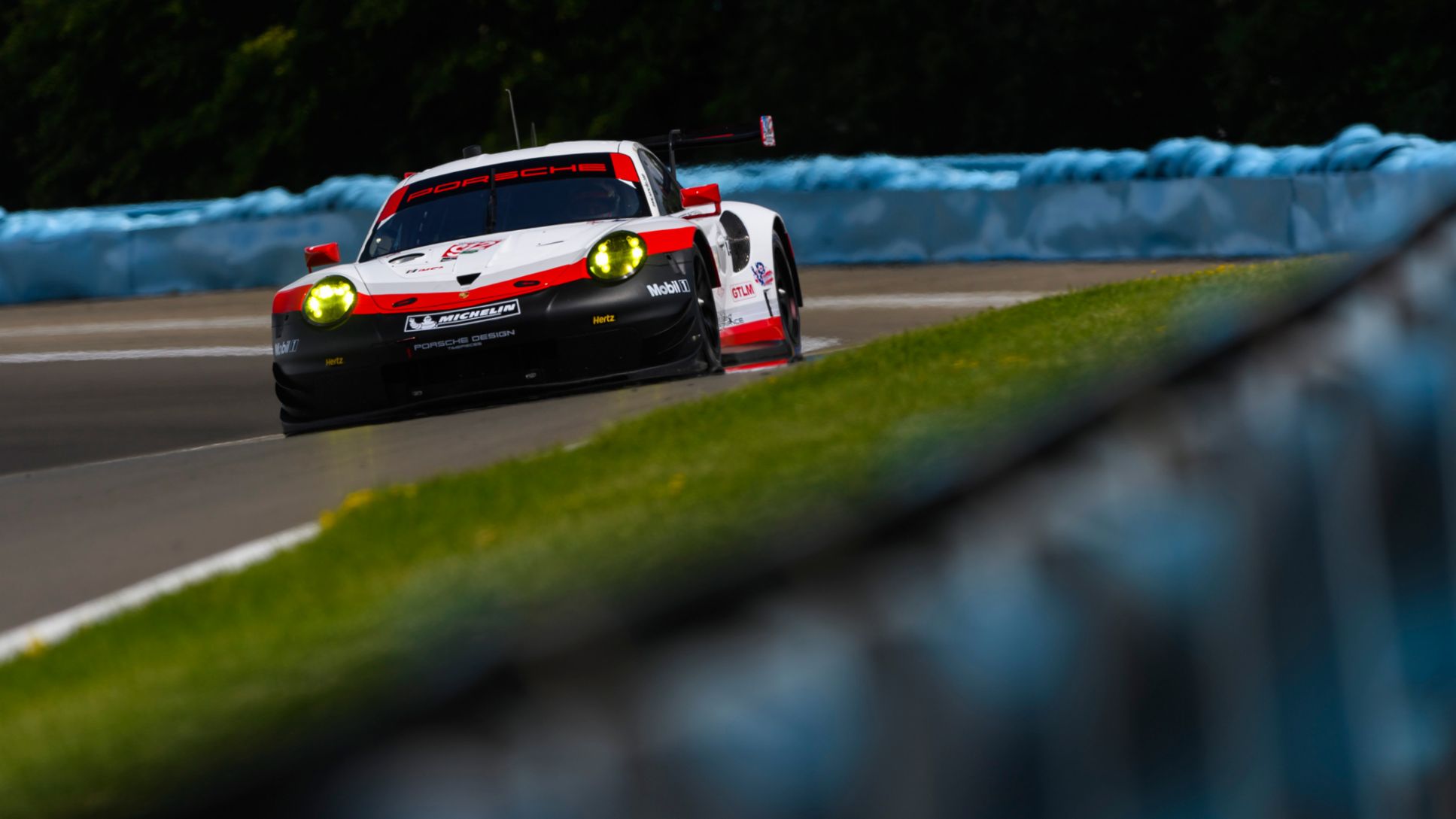 The IMSA SportsCar Championship keeps the revs high for drivers and teams: Just one week after the six-hour classic at Watkins Glen, North America’s premier sports car race series contests its only race in Canada this season at Bowmanville on 9 July.

At the Canadian Tire Motorsport Park not far from the metropolis of Toronto, the Porsche GT Team fields two Porsche 911 RSR in the GTLM class. Traditionally, the competition in this category is particularly tough, guaranteeing action-packed racing from start to finish. Porsche customer teams will campaign three 911 GT3 R in the GTD class.

Many fans know the tradition-steeped 3.957-kilometre racetrack at the Canadian Tire Motorsport Park as the Mosport International Raceway. Stirling Moss won the inaugural race on Canada’s oldest racetrack in 1961 at the wheel of a Lotus 19. In the races of the IMSA SportsCar Championship and its predecessor series, the American Le Mans Series, Porsche has celebrated a total of 13 GT victories on this dauntingly fast racetrack since 1999 – the most recent in 2015 courtesy of Patrick Pilet and Nick Tandy in the 911 RSR.

For the race in Bowmanville, Patrick Pilet (France) and Dirk Werner (Germany) share the cockpit of the #911 Porsche 911 RSR. Manning the #912 vehicle are Laurens Vanthoor (Belgium) and Gianmaria Bruni (Italy), who contested his maiden race as a Porsche works driver at Watkins Glen.

The 911 RSR is a completely new development and is campaigned by the Porsche GT Team in both the IMSA SportsCar Championship and the Sports Car World Endurance Championship WEC. Depending on the size of the restrictor, the motor, which is now positioned in front of the rear axle, puts out around 375 kW (510 hp). The level of downforce and the aerodynamic efficiency were significantly improved.

The 911 GT3 R, mounted with the new ultra-modern, four-litre, flat-six engine with direct fuel injection, was designed by Porsche for worldwide GT3 series on the basis of the 911 GT3 RS production sports car. The over 368 kW (500 hp) customer sport racer celebrated its first 2017 victory at Daytona.

The race on the Canadian Tire Motorsport Park takes off on Sunday, 10 July, at 12.05 hrs local time (18.05 hrs CEST) and runs over 2:40 hours. It can be viewed live outside Canada and the USA on www.imsa.com.

Dr. Frank-Steffen Walliser, Vice President and GT Cars: “This is quite a tough July. Just one week after Watkins Glen we’re heading to Bowmanville, a fortnight later we’re competing at Lime Rock. It’s a demanding schedule for drivers and teams. After Watkins Glen we have very few days to prepare for the race in Canada. We’ll use this time well to prepare our two 911 RSR for the ultra fast and challenging racetrack.”

Marco Ujhasi, Overall Project Manager GT Works Motorsport: “It’s very difficult to overtake on this super swift circuit. With our victory there two years ago, we saw how vital it is to start from pole position. For this reason, we’ll have to find the perfect setup for our 911 RSR in time for the qualifying. In this regard, our recent tests in Mosport definitely helped.”

Sebastian Golz, Project Manager GT Customer Motorsport: “This high-speed track is particularly challenging for the driver’s concentration. With the many repairs that have been made over the years, the quality of the track surface changes from corner to corner, and hence so does the grip level. This circuit should suit the 911 GT3 R well, particularly with the car’s excellent traction.”

Patrick Pilet (911 RSR #911): “Mosport is one of my favourite racetracks. If you want to win there you need a lot of courage. It has tricky bumpy sections and barely any run-off areas, plus lots of fast corners where drivers have to be confident enough to trust themselves. Two years ago I won the race here and ultimately the championship as well. I’m sure that the circuit suits our new 911 RSR perfectly and we hope that we can make the most of its potential.”

Dirk Werner (911 RSR #911): “This is a racetrack for the truly courageous. Many of the fast corners practically run into each other so that you have no chance to catch your breath. You have to be totally focused the whole time. It’s great fun driving the 911 RSR there. We’re now entering a critical phase of the season, where we need to earn as many points as possible if we want to stay in the fight for the title. We’ve tested at Mosport and that yielded a lot. Now we’ll attack in the race.”

Laurens Vanthoor (911 RSR #912): “Watkins Glen and Mosport, two great races with a week – that’s fantastic. The track has a tradition, you notice this at every corner, and it’s super fast. We’ve conducted tests there and we’re well prepared. For me, it’s one of the highlights of the season.”

Gianmaria Bruni (911 RSR #912): “This circuit is a constant challenge. With its many fast corners, you hardly get any time to breathe. I have great memories of Mosport. 2010 was the last time I drove there and I set pole position. I hope it goes as well this time and that I’ll be back at the front with Porsche.”