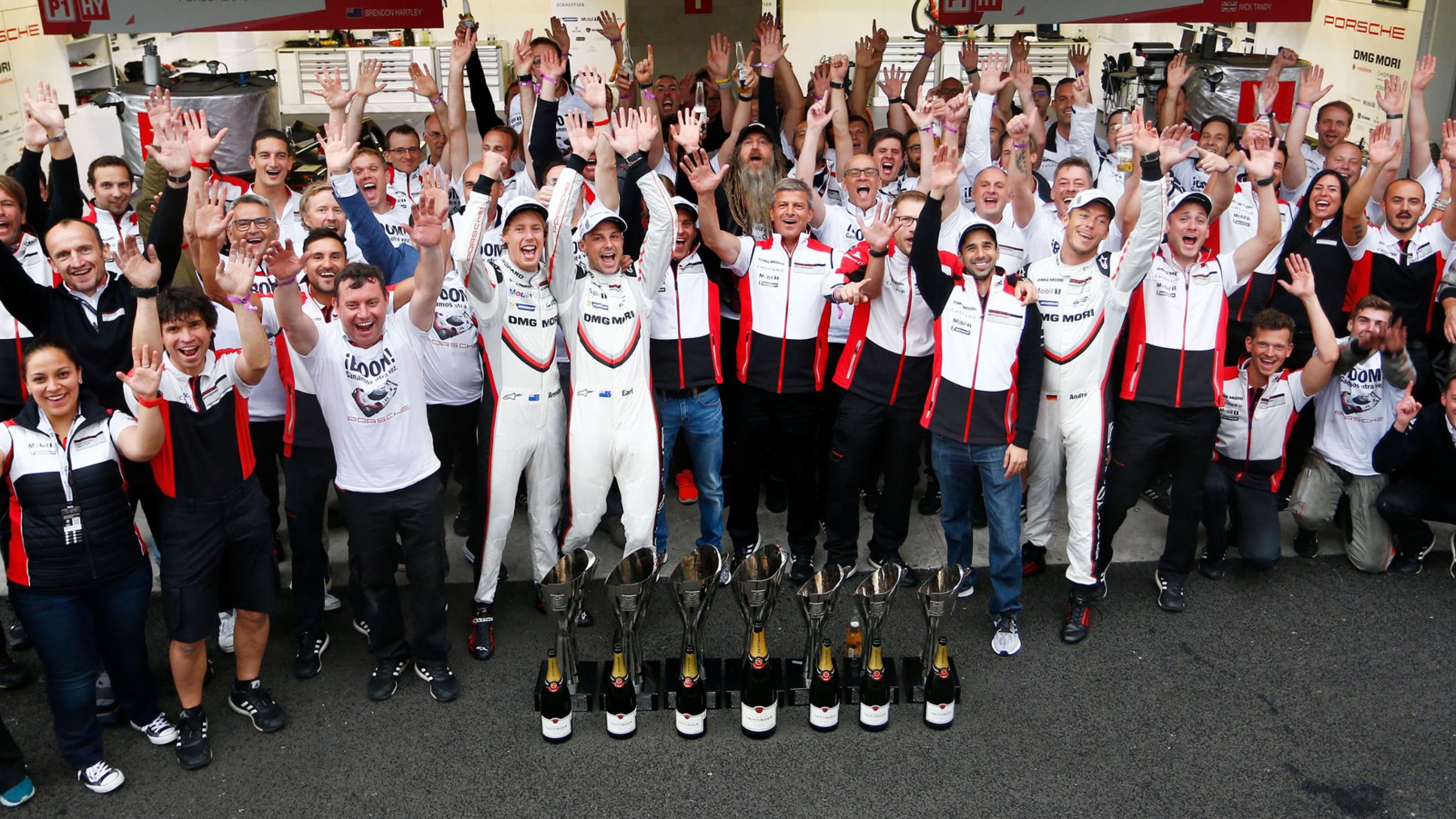 At the fifth round of the FIA World Endurance Championship (WEC) at the Autódromo Hermanos Rodríguez in Mexico City, the Porsche LMP Team took another big step in their mission of title defence by achieving a dominant one-two victory. The Porsche GT Team scored its fourth podium result this season with the new 911 RSR.

Against all predictions, the weather stayed dry during the well received six-hour race and allowed straight racing with a pure result. The two Porsche 919 Hybrids lapped the competition provided by Toyota while Hartley set the fastest race lap.

Since the beginning of the 2014 season, the Porsche 919 Hybrid has now competed in 30 races, achieving 17 pole positions, 16 race wins – including six one-two victories – and ten fastest race laps. For 2017, the team is aiming to achieve a third consecutive world championship title for manufacturers and drivers. Porsche has now scored 198 points in the manufacturers’ world championship with Toyota on 141.5 points. In the drivers’ rankings, Bamber/Bernhard/Hartley (134 points) have extended their lead over the best placed Toyota trio to 41 points. Jani/Lotterer/Tandy now lie third in the championship (64 points). In less than two weeks time, on September 16, the WEC starts round six of nine at the Circuit of the Americas in Austin, Texas (USA).

Tandy starts from P2 and stays on the heels of the leading sister car. He refuels after 40 laps and hands over the car to Lotterer after 80 laps. Because Tandy has exceeded the pit lane speed limit, Lotterer has to serve a stop-and-go penalty that costs around 20 seconds at the end of lap 91 and loses contact to the leading Porsche number 2. Lotterer refuels after 120 laps and hands over to Jani after 160 laps. While in pit lane, Jani laps the number 8 Toyota. He refuels again after 181 laps and picks up fresh tyres, taking advantage of a full course yellow phase. On lap 190, he also laps the number 7 Toyota. The team again uses a full course yellow to fill up the car after 200 laps. The rain that was expected for the final stages stays clear. After 237 laps, Jani stops for a splash of fuel and finishes the race three laps later in second position.

Hartley takes a solid lead from pole position. On lap three he sets the fastest lap of the race in 1:25.730 minutes. He refuels after 39 laps and hands over the 919 to Bamber after 79 laps. The team’s second Kiwi refuels after 119 laps. At this stop, a defective fuel flow meter sensor that controls the petrol consumption is replaced. On lap 121, mid-distance in the race, Bamber laps the first Toyota, then on lap 136 he laps the second one. After 159 laps, Bamber hands over to Bernhard. For the German’s first stop the team uses a full course yellow period for refuelling and fresh tyres after 182 laps. When the next full course yellow arises, the team again decides for an early stop and refuels after 199 laps. Bernhard continues leading the race by a substantial margin of half a minute. After 238 of 240 laps, he stops for a final splash of fuel before taking a dominant victory.

Fritz Enzinger, Vice President LMP1: “The 919 Hybrid was never more dominant than here. We have been fastest in free practice and qualifying and now we’ve got a one-two race win. We have experienced an impressive performance of our prototype and a sensational team effort. I want to thank the team on site, the development centre in Weissach and the entire Porsche AG.”

Andreas Seidl, Team Principal: “Congratulations to the whole team here at the track and at home in our Weissach workshop for this stunning one-two victory today. After the Nürburgring race, we’ve worked very hard at another test in Barcelona as well as in the following weeks to further improve the Porsche 919. Due to the changing track temperatures today, it was very important to choose the right tires at the right moment. Together with our colleagues from Michelin, we managed that very well. A big thank you to our six drivers too. Despite the fast pace and the constant challenge of overtaking traffic, they brought both cars home without a single scratch. We stay focussed and start our preparations for the next WEC race in Austin tomorrow.”

Porsche has made a successful start into the second half of the season in the Sports Car World Endurance Championship WEC, when Richard Lietz (Austria) and Frédéric Makowiecki (France) crossed the finish line as third in the GTE-Pro class after 208 laps on the Autódromo Hermanos Rodríguez. Thanks to this result, they advanced to second place in the drivers’ world championship standings. In the GTE-Am class, in which Porsche’s customer squads field the 2015-spec 911 RSR, Dempsey Proton Racing with the Porsche Young Professional Matteo Cairoli (Italy) clinched its second win of the season.

As a dark cloudbank moved over the Autódromo Hermanos Rodríguez and a few drops of rain began to fall, the race seemed to be at a tipping point. With just 40 minutes left to the flag on the tradition-steeped 4.304-kilometer racetrack in Mexico City, a rain shower so close to the finish would have opened the door wide to chance. Luckily, the track remained mostly dry in the final laps of yet another entertaining and gripping race, particularly in the GTE classes.

For the third time this season, Richard Lietz and Frédéric Makowiecki climbed the podium. Third place at the season-opener in Silverstone, second at the home race on the Nürburgring and now third again – the drivers of the #91 car are well placed to tackle the second half of the season, which continues in a fortnight in Austin, Texas. With this success, they have moved up the points table to now rank second in the GT Drivers’ World Championship and are once again within striking distance of the title. The Porsche GT Team has also moved into second place in the team classification.

For their teammates Michael Christensen (Denmark) and Kévin Estre (France), things didn’t work out quite as well in Mexico. In the second 911 RSR (#92) fielded by the Porsche GT Team, the pair ended up on fifth place after a far from ideal race. When Michael Christensen tried to overtake an amateur-class Ferrari in the first hour of racing, the Ferrari shunted the #92 car from the side. This incident was one of several for the third-place getter from the Nürburgring. When a caution phase towards the end of the race thwarted their strategic plans, all hopes of catching up were dashed.

The strong Porsche showing in Mexico, where the WEC raced only for the second time, was made perfect by the customer teams in the GTE-Am class. Dempsey Proton Racing with the Porsche Young Professional Matteo Cairoli and his German teammates Christian Ried and Marvin Dienst, celebrated their second win of the season after the Nürburgring victory in the 911 RSR. The joint partner Patrick Dempsey congratulated the team via Twitter immediately after they crossed the finish line. The British drivers Ben Barker and Michael Wainwright as well as Australia’s Nick Foster climbed the podium for the first time after securing their best result of the season for Gulf Racing with third place.

Dr. Frank-Steffen Walliser, Vice President Motorsport and GT Cars: “We achieved this podium result at this extremely competitive race thanks to the reliability of our 911 RSR and a perfect performance from team and drivers. This has earned us important points and we’re now sitting second in the world championship. The fight for the title is still wide open and exciting. In the GTE-Am class, our Young Professional Matteo Cairoli once again underlined his talent and contributed to our customer squad Dempsey Proton Racing achieving their second straight victory. I’m also particularly thrilled about Gulf Racing’s first WEC podium this season.”

Round six of the Sports Car World Endurance Championship WEC will be contested in Austin/USA on 16 September.

The new Porsche Mobil 1 Supercup season kicks off this weekend as support to the Monaco Grand Prix.