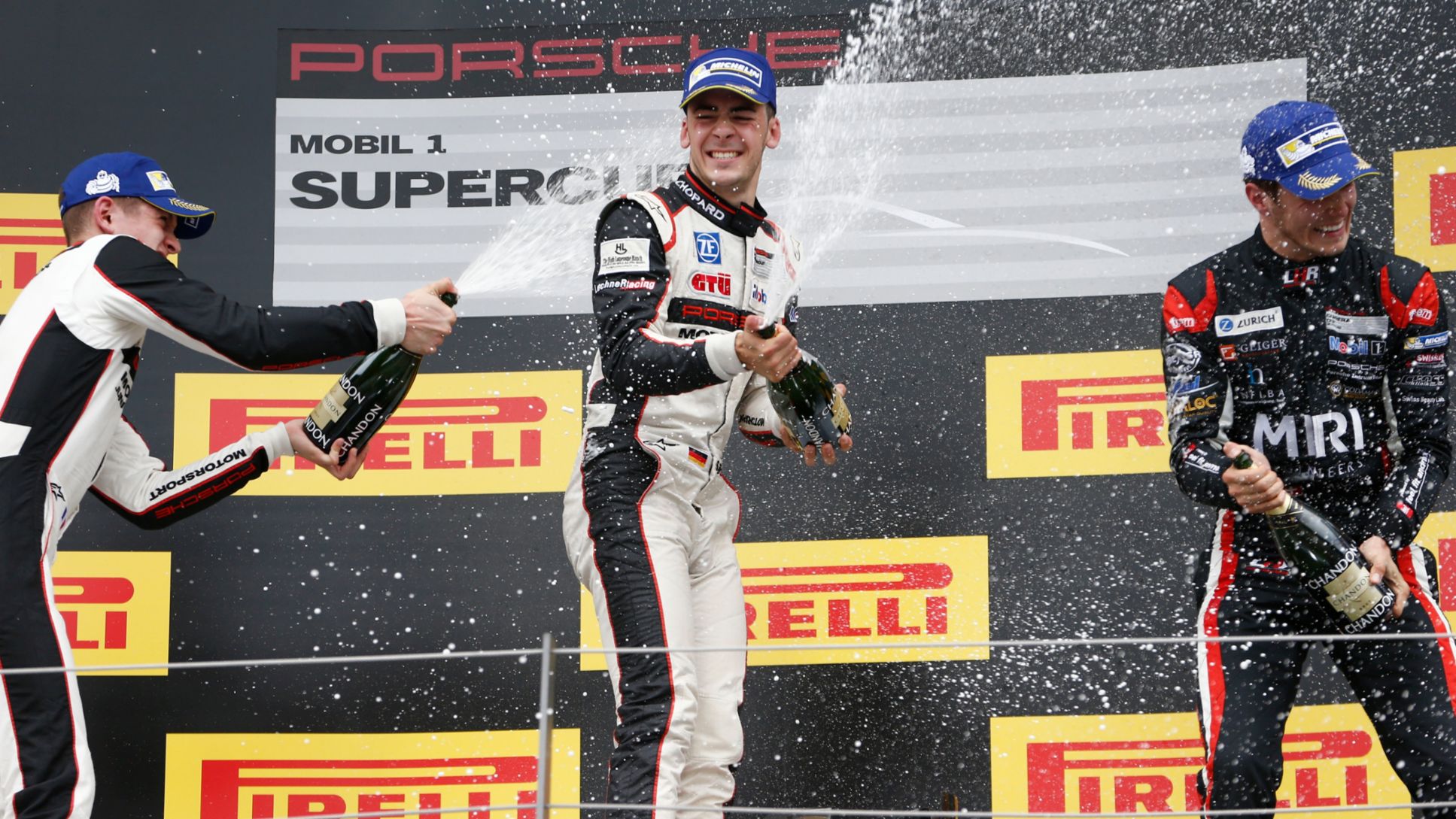 Round three of the Porsche Mobil 1 Supercup on Sunday has turned into a weather thriller. The Porsche Junior has kept his cool in the difficult weather conditions to secure his first win of the season in Spielberg, Austria.

Behind the 24-year-old German, Porsche Junior Mathieu Jaminet (F/Martinet by Almeras) finished on second place, with Jeffrey Schmidt (CH/Lechner Racing Middle East) taking third. “To win on the Red Bull Ring from the second grid row is really incredible. It wasn’t easy because we had wet and semi-dry conditions on the track. Still, I’m absolutely thrilled,” said a beaming Müller. After a rainy morning, the showers stopped just as the 29 Porsche 911 GT3 Cup racers rolled to the prestart. Several drivers had opted for wet tyres due to the wet track, but as the sky continued to clear almost all the teams scrabbled to quickly mount the vehicles with slick tyres.

Cairoli, who had posted pole position on Saturday, lined up next to Jaminet on the first grid row. As the field took off, Müller and Jaminet immediately overtook Cairoli on the right and left to take the lead. Schmidt also managed to squeeze past the Italian, and this order remained unchanged to the flag. “I had a problem at the start finding right balance between throttle pedal and clutch and I lost three positions. Every time I managed to gain ground in the race the safety car came out and there wasn’t much I could do. Of course I’m disappointed that I didn’t win here,” concluded Cairoli.

Several drivers paid dearly for the difficult track conditions with many wet and slippery spots on the track. There were three safety car phases in the 16-lap race so that vehicles could be salvaged out of the gravel. Müller, who had built up a small gap, constantly had to defend his lead after each restart. Jaminet was delighted with second place at his debut race in Spielberg. “Two podium results from three races is really great. I got away well at the start. Sven and I sprinted to the first corner side by side, but he had a small advantage because he was on the dry line. Then he got ahead of me and I wasn’t able to overtake him for the remainder of the race,” said Jaminet.

Schmidt secured third place: “I’ve been fast this year, but I haven’t been able to get the results in the Supercup. Here in Spielberg I scored a podium spot two years’ ago. I like this track and as far as I’m concerned we could drive here more often,” said Schmidt with a smile. Cairoli crossed the finish line in fourth place. The 26-year-old Frenchman Steven Palette (Martinet by Almeras) saw the chequered flag in fifth. Philipp Frommenwiler from Switzerland battled his way up the order from ninth to finish sixth. Supercup newcomer Ryan Cullen (GB/Lechner Racing Middle East) concluded the race in seventh ahead of Christian Engelhart (D/MRS GT-Racing), making it his best result by now.

Round three in Silverstone

Round four of the Porsche Mobil 1 Supercup is contested this coming weekend from 8-10 July on the British Silverstone circuit. For the three regular Supercup competitors from Great Britain, this race will be a home race. Ben Barker and Paul Rees come from Oxford and both compete for the MOMO-Megatron Team Partrax. Ryan Cullen (Lechner Racing Middle East) hails from Bristol and is looking forward to his race on home turf. Also joining the race action are eight British guest drivers, some of whom contest the Porsche Carrera Cup Great Britain.