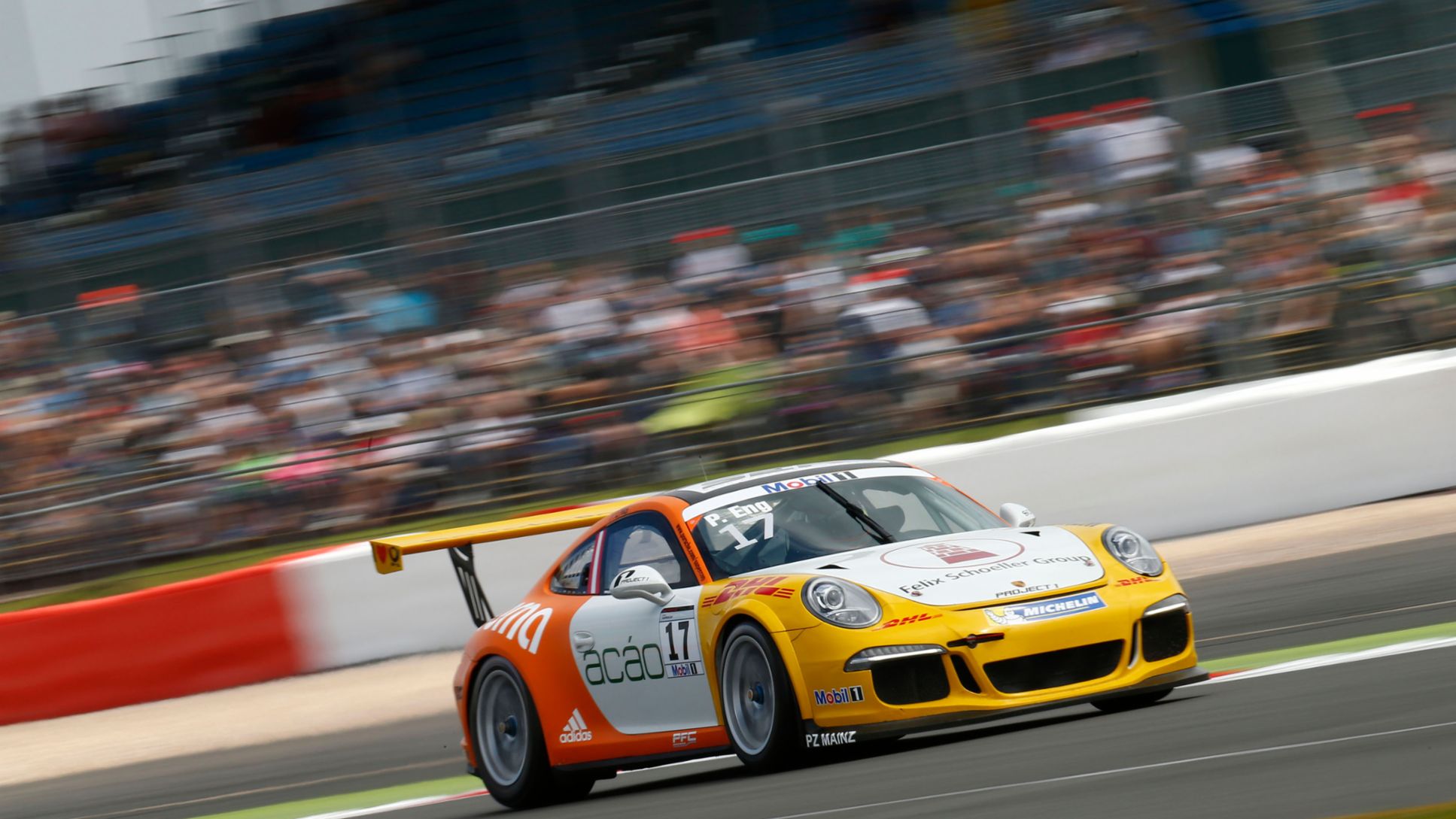 Philipp Eng has secured pole position in the Porsche Mobil 1 Supercup qualifying on the British race track at Silverstone. Alex Riberas takes up the race from the second grid spot.

The 25-year-old Austrian Eng (Market Leader Team by Project 1) turned the quickest lap shortly before the end of the session. “My car was excellent today. I could really go for it in the corners. After the practice session on Friday, the team worked a lot on the car again and that paid off,” explained Eng.

A mere 33-thousandths-of-a-second separated Eng from the Spaniard Alex Riberas (The Heart of Racing by Lechner), who takes up Sunday’s race from the second grid spot. Occupying position three is Germany’s Michael Ammermüller (Lechner Racing Middle East) with Robert Lukas (Förch Racing by Lukas Motorsport) from Poland on fourth.

The qualifying session for the fourth of eleven rounds on the Porsche Mobil 1 Supercup calendar proved difficult early on, with a caution phase initially preventing fast lap times. Eng managed to plant his 460 hp Porsche 911 GT3 Cup on pole position right at the start, only to have Riberas undercut his time ten minutes later. With seven minutes left to the 30-minute session, Eng reappeared at the top of the time charts, with him and Riberas duelling for the top time over the final laps.

“When I pulled into the pits I was sure I’d turned the perfect lap. But then my engineer said that Philipp had beaten me by 33-thousandths of a second. That’s insanely close. We’re both on the front grid row tomorrow and I’m really excited about the race,” said Riberas.

With temperatures of 21 degrees Celsius at Silverstone, there was no sign of the heatwave on the continent. The only heated topic was when several drivers crossed the side line of the track and were stripped of their lap times for the transgression.

As the best British driver Barker starts from fifth place

As the best British driver behind Eng, Riberas, Ammermüller and Lukas, Ben Barker (MOMO-Megatron Team Partrax) heads into the race from fifth place. Christian Engelhart (D/MRS GT-Racing) starts from sixth on the grid. The Porsche juniors Matteo Cairoli (I/Market Leader Team by Project 1), Sven Müller (D/Lechner Racing Middle East) and Connor de Phillippi (USA/VERVA Lechner Racing Team) posted positions seven to nine respectively. “We have to keep working on the car’s setup, but I’m feeling confident for the race on Sunday. Let’s see if I can make up some places,” said Cairoli. “I’ve come down with a nasty summer cold and I’m not feeling too great. I’m not happy with my qualifying result but that’s because of my performance. I’ll rest a bit now so that I’m fit for the race,” explained Müller. “Just as I was turning my fast lap someone drove directly in front of me. Otherwise I’m sure I’d have qualified in the top five. It’s a pity, but unfortunately I can’t do anything about it,” declared de Phillippi.