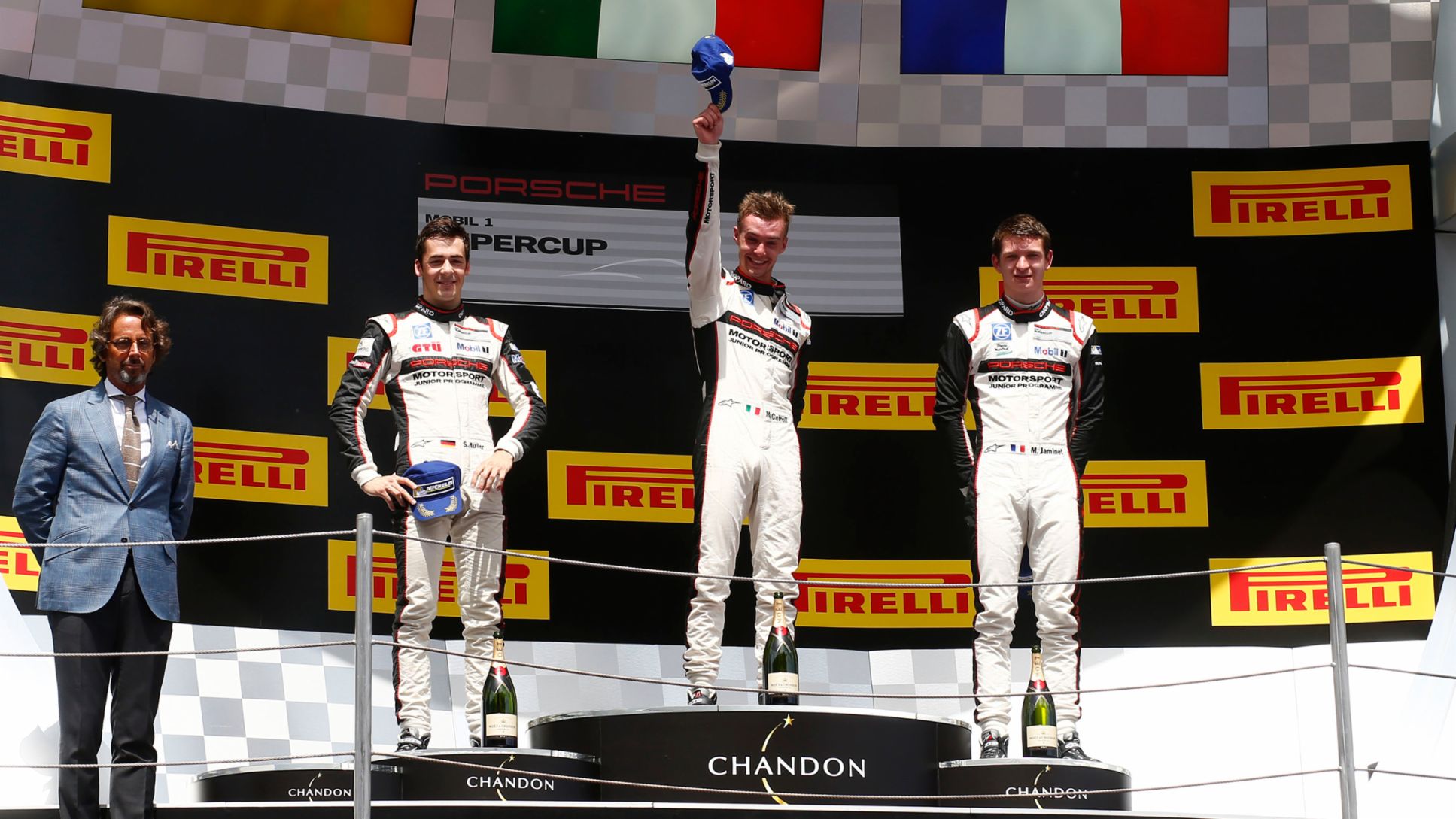 Porsche Mobil 1 Supercup season-opener: On the racetrack in Barcelona, the Italian Matteo Cairoli has clinched victory ahead of Germany’s Sven Müller and Mathieu Jaminet from France.

This start to the Porsche Mobil 1 Supercup season is one that the Porsche Juniors will not quickly forget. Porsche selected all three of these talented youngsters for its junior programme and supports them in their 2016 Supercup campaign. “What a perfect start to the season! I knew the car had a super fast set-up, but still, first you have to win,” said an ecstatic Cairoli. On the 4.655-kilometre circuit, pole-sitter Cairoli got the jump at the start and immediately pulled away from the field. After just one lap he had already built a gap of 1.7 seconds to the rest of the pack. Behind 19-year-old Cairoli sat Müller who had also got off the line cleanly to make up one position from third to second.

The Supercup rookie slotted in behind Müller in third. When the safety car was deployed after a vehicle left the field and ended in the gravel, Cairoli’s advantage shrunk. But the pilot from Como kept his cool and brought home a convincing win. “I tried to stick to Matteo but he was simply faster than me and he drove an immaculate race. I’m thrilled to climb the podium for the first time in Barcelona and it was important for me to start well into the season,” declared Müller, for whom this marks his third race on the Circuit de Barcelona-Catalunya. His Porsche Junior colleague Jaminet added with a laugh: “But in fact I performed better than you: This was my first Supercup race and I scored a podium spot. I fluffed the start, but the rest of the race ran well.”

A battle for positions

Behind the Porsche Juniors a battle raged for positions. Taking up the race from the fourth grid spot, last year’s Barcelona winner Ammermüller lost numerous positions at the start and was relegated back to eighth. A collision in lap three between Christian Engelhart (D/MRS GT-Racing) and Jeffrey Schmidt (CH/Lechner Racing Middle East) saw Engelhart end up in the gravel and out of contention. After 14 laps all three Porsche Juniors drove their way to the podium. Starting from eighth on the grid, Britain’s Ben Barker (Momo-Megatron Team Partrax) put in a spirited sprint through the field to finish fourth. Ammermüller ultimately saw the flag in fifth ahead of Schmidt. Robert Lukas (Förch Racing by Lukas Motorsport) from Poland yielded seventh in front of Zaid Ashkanani (Lechner Racing Middle East) from Kuwait.

Spectators in the well-filled grandstands were treated to a race packed with overtaking manoeuvres and gripping wheel-to-wheel duels. After his maiden Porsche Mobil 1 Supercup victory at the first of 10 rounds, Cairoli leads the championship with 20 points. “This year I’m competing for Fach Auto Tech – the same squad that Le Mans winner Earl Bamber drove for. I would like to win the Supercup this year, just as he did two years ago,” Cairoli declared his goal. In addition to the Porsche Mobil 1 Supercup, the Italian also contests numerous races in other European Porsche onemake series with his Porsche 911 GT3 Cup, which is based on the lightweight 911 GR3 sports car. After clinching two second places at the Monza double-header last year, this Barcelona victory marks his greatest success by now in the international Porsche brand trophy series run as support to Formula 1.

The unique street circuit of Monaco

The next race of the Porsche Mobil 1 Supercup takes place on the unique street circuit of Monaco. From 26 to 29 May, the Porsche paddock will be set up in the circus tent in Monaco. The 3.337-kilometre street circuit poses a challenge to the pilots in their 460 hp Porsche 911 GT3 Cup – as this racetrack leaves no room for error.