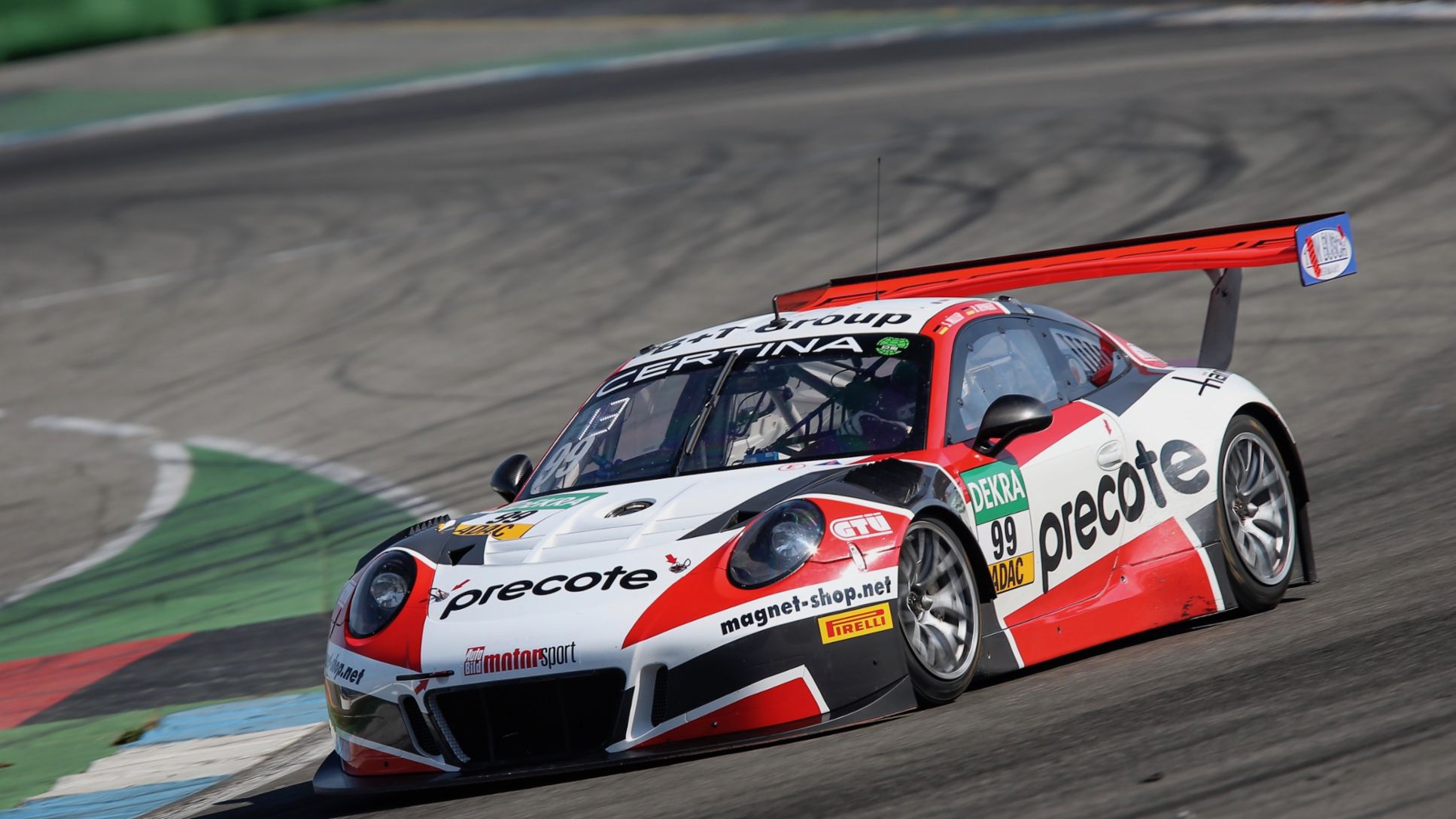 A 37-strong field from eight manufacturers guarantees some world-class race action. The drivers travel to four different countries over the course of seven weekends, each of which features two races. All the races are broadcast live on SPORT1.

Twenty-three racing teams have signed on for the 2018 season. Three Porsche customer squads put their faith in the 500 hp 911 GT3 R. Just like last year, KÜS Team75 Bernhard run by the Porsche works driver Timo Bernhard and his father Rüdiger, as well as Precote Herberth Motorsport, will contest the renowned racing series. A newcomer to the ADAC GT Masters is the Ring Police team. This squad receives support from the TV commentator and cult YouTuber Jean Pierre (“JP”) Kraemer.

Timo Bernhard contests the series for his own racing team

Timo Bernhard debuts in the ADAC GT Masters: The 37-year-old professional racer from the German town of Bruchmühlbach-Miesau contests the series for the first time in 2018 for his own racing team. The outright Le Mans winner, who has enjoyed Porsche’s support since 1999, shares the cockpit with his works driver colleague Kévin Estre from France. The 29-year-old Frenchman is no stranger to KÜS Team75 Bernhard: in 2016 he scored four victories for the crew. Sharing driving duties in the team’s second Porsche 911 GT3 R are the former Porsche Junior from Austria Klaus Bachler and the Belgian Adrien de Leener. Bachler (26) started his GT racing career in Porsche’s one-make cup series and has also contested endurance events including the VLN as well as 33 ADAC GT Masters races. His 28-year-old teammate, de Leener, tackled his first season in the “Super Sports Car League” last year and contested 14 races for KÜS Team75 Bernhard.

Driving for Precote Herberth Motorsport are Porsche Young Professional Mathieu Jaminet and Robert Renauer. Jaminet, who lives in the French town of Woippy, contested the series in 2017, with the 23-year-old promptly winning the opening round in Oschersleben. The Porsche-backed pilot also competed for Precote Herberth Motorsport at the 24 Hours of Spa-Francorchamps last year. In January 2018, the Frenchman joined forces with his new teammate to take on the 24 Hours of Daytona. Over the course of his career, 32-year-old Renauer has notched up around 100 ADAC GT Masters races. In 2017, four victories in the Creventic 24H Series handed the Dachau-born German the “Champion of Continents” title. The Bavarian’s team boss is none other than his twin brother, Alfred Renauer.

The Ring Police squad celebrates its debut in the GT Masters in 2018. Manning the cockpit of the 911 GT3 R is the managing director Jan-Erik Slooten (33) and Lucas Luhr (38). The long-standing Porsche works driver is a former FIA GT1 world champion and winner of the 24-hour races at Spa-Francorchamps, Daytona as well as the Nürburgring. He also contested the DTM.

As in 2017, the Porsche 911 GT3 R is fielded in the ADAC GT Masters. The 500 hp customer sport racer celebrated its premiere in January 2016 at the 24 Hours of Daytona and has since netted victories in many international racing series such as the IMSA SportsCar Championship, the Pirelli World Challenge and the VLN long-distance championship at the Nürburgring. For the upcoming season, the GT sports car has received an upgrade: The parts kit includes a new front lid for the optimisation of thermal management plus side flicks at the front spoiler to improve the aerobalance.

Seven race weekends make up the ADAC GT Masters calendar, with two 60-minute races held on each weekend. Competitors will also tackle several European events outside Germany. In addition to Spielberg (Austria) and Zandvoort (Netherlands), the Autodrom Most in the Czech Republic hosts a round of the ADAC GT Masters for the first time. The television channel SPORT1 provides live full-length coverage of all races.