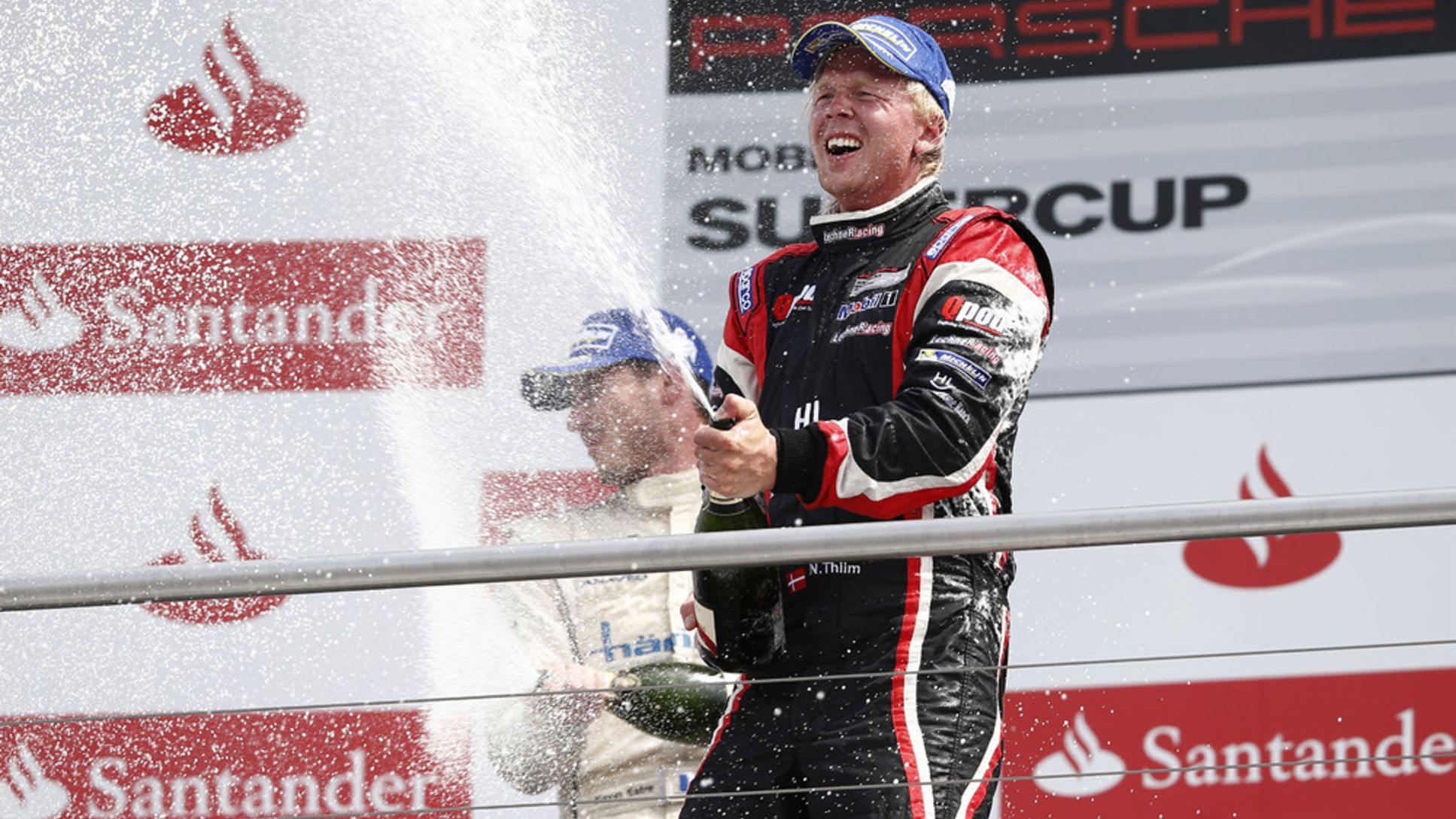 Nicki Thiim (Walter Lechner Racing Team) is the round five winner of the Porsche Mobil 1 Supercup on Sunday.

On the Hockenheimring Baden-Württemberg, the Dane led the field over the finish line and was thrilled with his achievement. “Finally I’m back at the top of the podium. I’m going to enjoy my win today,” said an ecstatic Thiim. Second and third place went to the winner of the International Cup Scholarship Earl Bamber (NZ/Fach Auto Tech) and Kévin Estre (F/Mc Gregor powered by Attempto Racing). VIP-driver Patrick Dempsey (USA/Porsche AG) finished 23rd out of 28 contenders.

Thiim took up the race from pole position

Rainfall in the morning at Hockenheim left some passages of the 4.578 kilometre circuit damp when the Porsche Mobil 1 Supercup field took off into round five of the championship. Taking up the race from pole position, Thiim initially lost the lead to Estre, but the reigning Supercup champion reclaimed the front spot in lap two at the wheel of his 460 hp Porsche 911 GT3 Cup, with Bamber close on his heels. “I’m absolutely thrilled with my victory. The fight between us three front-runners was incredible. Man, it was tight, but ultimately it yielded crucial championship points,” said Bamber, last year’s Porsche Carrera Cup Asia winner.

Halfway through the 14-lap race, the top trio of Thiim, Bamber and Estre managed to put some space between them and the rest of the field. With two laps to the flag, Estre attempted another assault but was unsuccessful. “I thought I could get past, but I ended up in third. It’s a pity, but that’s how it goes sometimes,” said Estre. From sixth on the grid, Porsche junior Klaus Bachler (A/Konrad Motorsport) made a charge through the field with the 22-year-old Austrian finally taking the flag in fourth place. “I had a great race. The yellow flags prevented me from getting further ahead but the speed was there,” explained Bachler. Following him over the line was Germany’s Michael Ammermüller (Walter Lechner Racing Team) and Kuba Giermaziak (VERVA Lechner Racing Team) from Poland. After five of ten rounds in the Porsche Mobil 1 Supercup – the flagship championship of Porsche’s 19 brand trophy series worldwide – Giermaziak retains his lead with 76 points, trailed by Bamber (71 points).

Porsche junior Connor de Phillippi (USA/FÖRCH Racing by Lukas Motorsport) made up four places in the field to finally cross the finish line in eighth. “It was a wonderful race. I managed to pick off several competitors and I’m pleased with the result,” stated the 21-year-old Californian. Porsche junior Sven Müller (D/Team Project 1) finished in ninth: “Unfortunately I had an encounter with two others vehicles in the first lap and that threw me back from fifth to tenth. I managed to make up one position, so right now I’m feeling annoyed, but I’ll get over it,” said Müller. Porsche junior Alex Riberas (Mc Gregor powered by Attempto Racing) said: “Unfortunately my qualifying performance wasn’t great and it’s really hard to get through the field from the back of the pack. My last laps were great – I could have done with another few like that,” said the Spaniard.

In their identical Porsche 911 GT3 Cup racers which are based on the lightweight 911 GT3 production sports car, 28 pilots from 14 nations tackled the race in Hockenheim. Amongst them Hollywood star Patrick Dempsey who usually contests long distance races like the Le Mans 24 hour classic. As a guest entrant, Dempsey finished in 23rd. “I very much enjoyed my visit to Hockenheim. I experienced many new things like my first standing start and the 911 GT3 Cup. Competing in the number 911 car was cool. Everyone was so friendly and I had a great time on the track. I hope I get another chance to contest the Supercup.”

The German round of the Porsche Mobil 1 Supercup marks the halfway point in the season, but there is no time to relax: next weekend (25-27 July) the pilots of this top-league one-make series tackle round six on the Hungaroring in Budapest. Hot title aspirant Kuba Giermaziak (VERVA Lechner Racing Team) scored his maiden Porsche Mobil 1 Supercup win here in 2011. “I’m very much looking forward to this race. It’s kind of a home race for me with many Polish fans coming to watch the Grand Prix,” said the 24 year old. Christian Engelhart (Konrad Motorsport) is also motivated to perform well. Last year the German finished second and in this season’s national Porsche Carrera Cup secured a victory on the Hungaroring.

Points’ standings after 5 of 10 races