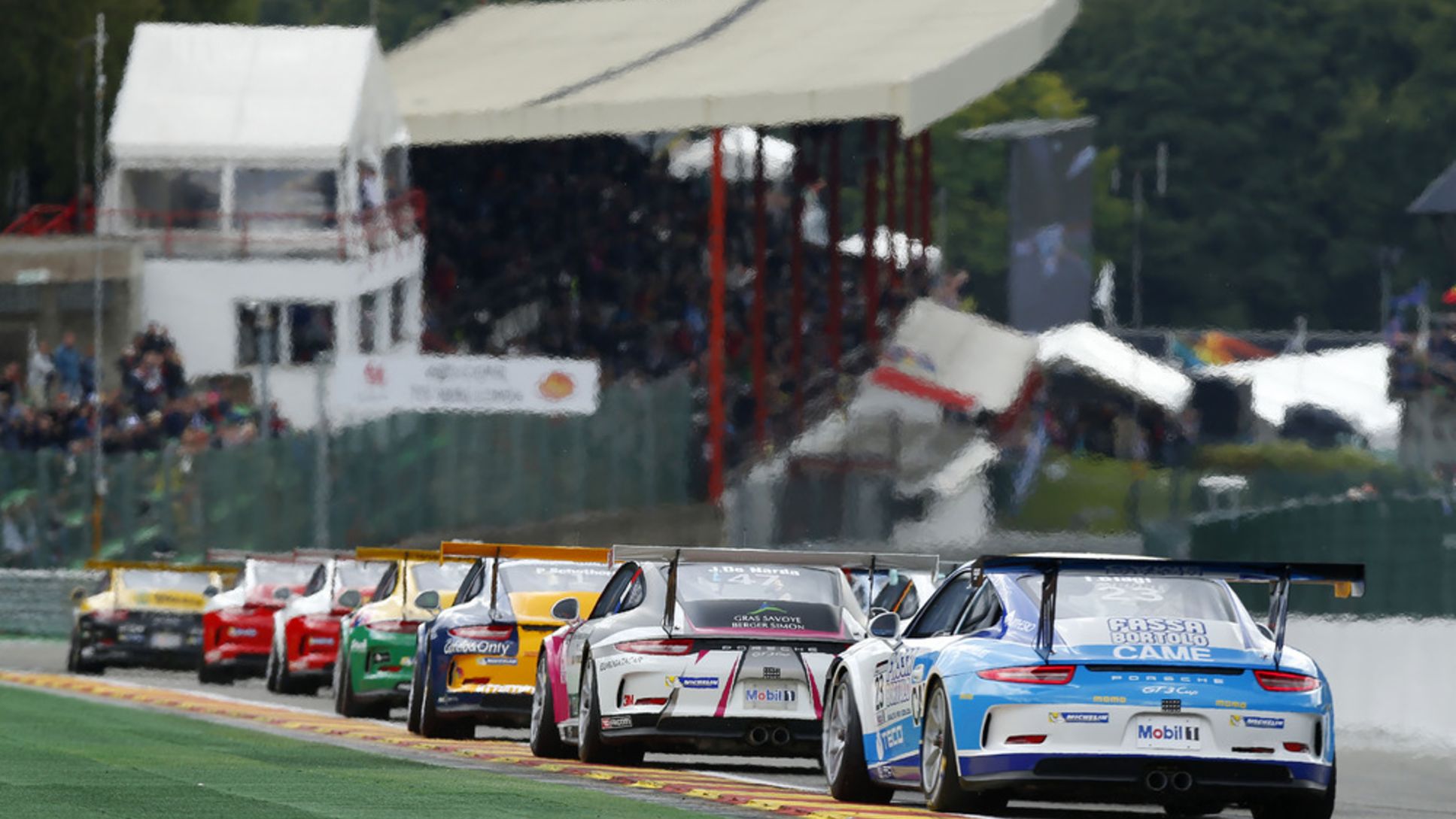 Earl Bamber celebrated his second win of the Porsche Mobil 1 Supercup season. In Spa, the Porsche Scholarship pilot moved to the top of the overall points’ standings.

When the field set off into the eleven-lap race on the 6.973 kilometre circuit, Bamber immediately pulled to the front of the field in his 460 hp Porsche 911 GT3 Cup which is based on the seventh generation of the 911. But after several hundred metres, the New Zealand slid sideways in the legendary Eau Rouge passage, opening the door for Thiim to sneak past. After his scare, the 24-year-old, who contested his 50th race in a Porsche at Spa, caught the Dane and launched a hefty attack to regain the lead spot. Once Bamber finally managed to squeeze past Thiim in lap six, the path was clear to clinch his second win of the Porsche Mobil 1 Supercup season. “Our fight was tough but very fair,” said Thiim (second place) summing up events. “Earl’s a great racer,” he admitted. Third place went to Porsche junior Klaus Bachler (A/Konrad Motorsport). “Fastest in free practice, pole position, victory and now the points’ leader – what a perfect weekend. I’m over the moon,” exclaimed a beaming Bamber.

Bachler seemed very pleased with third place: “I started from fifth on the grid and ended on the podium. I love the challenge Spa presents and I earned important points.” Porsche junior Sven Müller (D/Team Project 1) managed to salvage fourth place despite coming under heavy fire from his trailing teammate Philipp Eng (A/Team Project 1). “At the beginning of the race I got caught up in a couple of collisions and so I was pleased to have kept my damaged car in the race.” Taking the flag in sixth was Clemens Schmid (A/Walter Lechner Racing Team) in front of Ben Barker (GB/VERVA Lechner Racing Team) and the previous points’ leader Kuba Giermaziak (PL/VERVA Lechner Racing Team).

In Spa, Giermaziak lost precious points towards the coveted brand trophy which has run as support to Formula 1 since 1993. Holding 104 points the Pole has now slipped into second place in the championship behind Bamber (107 points). Bachler is tied for points with Barker (both 66 points). Germany’s Michael Ammermüller (Walter Lechner Racing Team) was forced into retirement after a collision in lap one and remains at 64 points. After this weekend, Bamber not only ranks first in the Porsche Mobil 1 Supercup, but also heads the leaderboard of the Porsche Carrera Cup Asia.

The best pursuit of the weekend came from guest driver Jaap van Lagen (MOMO-Megatron): The Dutchman ploughed from 17th on the grid to finish in ninth. The American Porsche junior Connor de Phillippi (FÖRCH Racing by Lukas Motorsport) saw the flag in tenth at his Spa debut. “I had expected more but I simply couldn’t do better today,” explained de Phillippi. Porsche junior Alex Riberas (E/Mc Gregor powered by Attempto Racing) occupied position 16. “Because guest drivers are not eligible to score points, at least I was able to take home three points. Next time I have to do better in qualifying.”

Italy’s Autodromo Nazionale di Monza hosts the next round of the Porsche Mobil 1 Supercup from 5 to 7 September. The circuit not far from the city of Milan is one of the most prestigious tracks on the race calendar. Round eight marks a home race for the ex-GT World Champion Thomas Biagi. Born in Italy but living in San Marino, Biagi contests his debut season for the MOMO-Megatron squad and heads to his home race feeling confident. Also hoping for a top result on the high-speed circuit of Monza is Germany’s Michael Ammermüller (Walter Lechner Racing Team). “I came second here last year and this year I want to win,” admits the determined German, and adds: “I really like this circuit with its fast passages.”