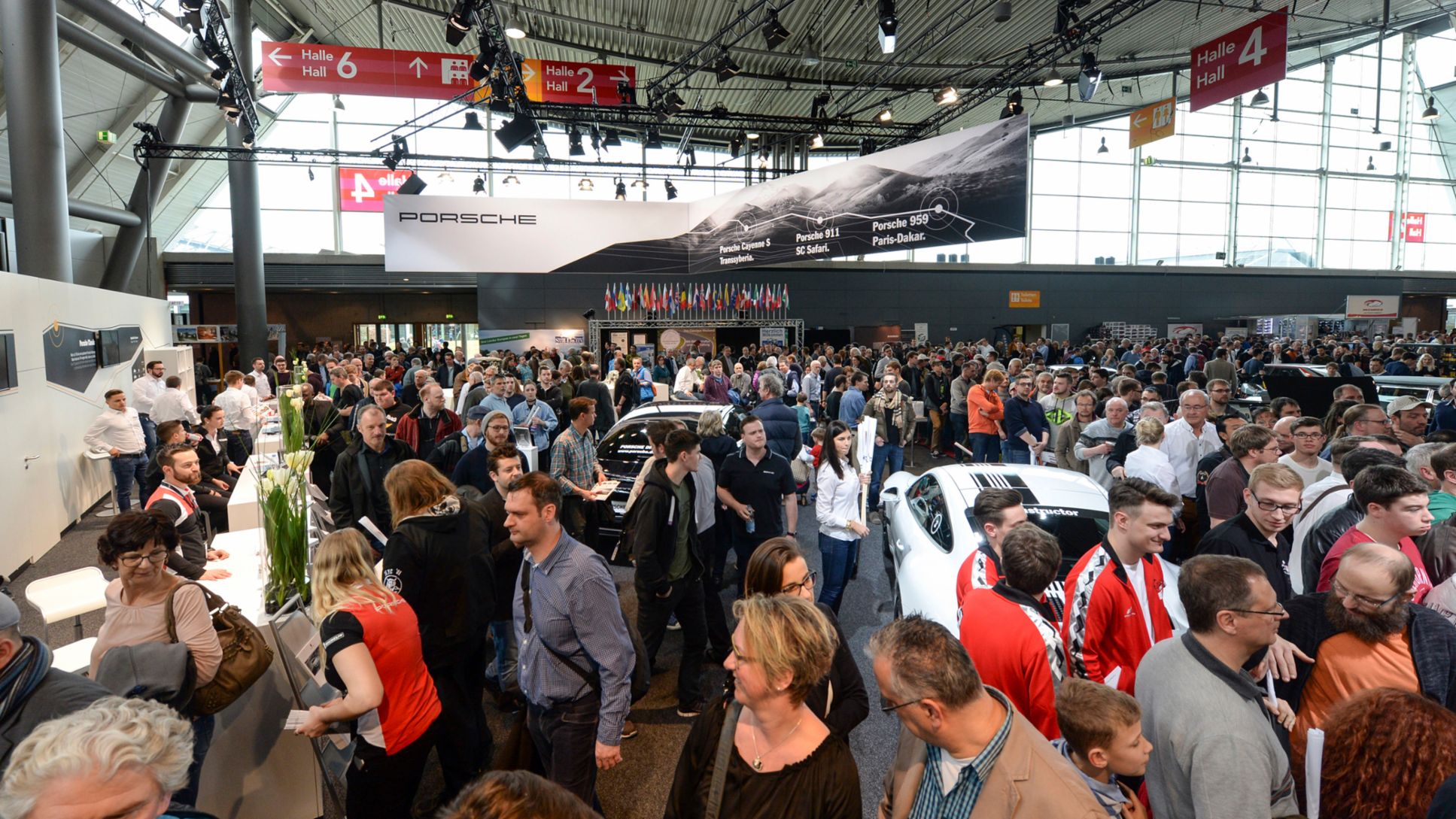 The Porsche Museum is celebrating "70 years of the Porsche sports car" at this year's Retro Classics exhibition. Every hour at the Porsche stand, visitors are invited to experience a 15-minute journey back in time through the history of the Porsche brand.

A selection of special sports cars form the centrepiece of the guided tour, in which Porsche presents the Type 915 as the study for a Gran Turismo based on the 911. This unique vehicle was constructed in the autumn of 1969 under the 915 type designation. With its wheelbase extended by 350 millimetres, the 915 was designed to offer more legroom for the rear passengers. A 356 Speedster from 1955 also features in the tour. This lightweight and affordable sports car was developed especially for the US market in the 1950s.

A core theme of the Porsche exhibition stand is the development of turbocharging. The brand’s pioneering work in this field is illustrated by four sports cars spanning several decades: The Porsche 961, a race track version of the 959 super sports car, demonstrated the reliability and performance of innovative technologies during the Le Mans long-distance race in 1986. The year 1991 saw the launch of an exclusive 944 Turbo Cabriolet with an output of 250 hp; by the end of series production, only 528 of these sports cars had been built. In 1997, Porsche Exclusive offered a performance-enhanced variant of the last air-cooled 911 Turbo, featuring a 3.6-litre flat engine with an output increased from 408 hp to 430 hp. The spectacular climax of turbo development is marked by the 911 GT2 RS, which holds the lap record for series-production vehicles on the Nürburgring Nordschleife at 6:47.3 minutes. This high-performance sports car with rear-wheel drive and an output of 515 kW (700 hp; Fuel consumption combined 11.8 l/100 km; CO2 emissions 269 g/km) is the fastest and most powerful 911 with road approval produced to date. Porsche Track Experience offers this vehicle as an option at its driving events and is presenting it at the Retro Classics exhibition.

Two-time World Rally Champion Walter Röhrl along with both Porsche racing legends, Hans Herrmann and Kurt Ahrens, are expected at the Porsche stand for an autograph session on Saturday, March 24 at 2:00 pm. Walter Röhrl has worked with Porsche as a representative and developer for 25 years. Hans Herrmann, who celebrated his 90th birthday in February, is one of the most successful works racing drivers at Porsche AG with more than 80 overall and class victories. Kurt Ahrens won the long-distance races in Zeltweg (1969) and at the Nürburgring (1970) for Porsche. Le Mans winner Marc Lieb and Porsche works driver Dirk Werner will also be available for autographs on Saturday March 24. Hans Herrmann and Kurt Ahrens will attend the Porsche stand as guests again on Sunday 25 from 2.00 pm for a further autograph session alongside Porsche works drivers Laurens Vanthoor and Richard Lietz. What’s more, car enthusiast and Porsche collector Magnus Walker has announced that he will be at the stand on Saturday March 24 at 4.00 pm to autograph his book entitled “Urban Outlaw: Dirt Don't Slow You Down”, published by Delius Klasing.

The team from Porsche Classic is available on all days of the exhibition for questions about repairing and restoring Porsche classic cars and can advise on the 52,000 items in the comprehensive genuine parts range, including the Porsche Classic Vehicle Tracking System plus genuine parts created using 3D printing. The experts will also showcase an example of their expertise in the form of the restored Porsche 911 S Type 915 prototype. The team from Porsche Experience will be in attendance too, offering exclusive driving experiences on unusual routes and race tracks, as well as on ice and snow, while the Porsche Drive team will present its mobility offering and the current models in the product range.

Alongside its usual range of souvenirs and titles from its internal publishing house “Edition Porsche Museum”, the museum shop will be selling the new Porsche Driver’s Selection product collection for the first time in celebration of “70 years of the Porsche sports car”. Selected products will also be available from Porsche Classic. For fans of Walter Röhrl, the range includes model vehicles and books about the racing icon.

The “Retro Classics” exhibition is taking place from March 22–25, 2018, at the Messe Stuttgart trade fair centre. The Porsche Museum can be found in its traditional spot in Hall 4, the Porsche Hall. More information is also available at www.porsche.com/museum/en/.

The Porsche Museum is offering an exciting programme for boys and girls aged 5 to 13 during the summer holidays.