With a commitment to making company history tangible, there will be four-wheeled brand ambassadors not only exhibited at Porscheplatz in Stuttgart Zuffenhausen, but also being deployed at numerous events worldwide again this year.

It’s a jubilee celebration for one of Zuffenhausen’s most powerful model series: the Porsche 917, one of the best-known race cars of all time, was presented to the public for the first time in 1969 at the Geneva Motor Show. Just one year later, Porsche brought home the first of a total of 19 gold medals at the Le Mans 24-hour race. The Porsche Museum will have ten 917 models on display from 14 May to 15 September, in one of its biggest-ever special exhibitions: “Colours of Speed – 50 Years of the 917”. The exhibition will give visitors the chance to see up-close a decisive milestone in Porsche’s proud racing history, as the first Porsche 917 ever built – with chassis number 001 – will be on show. The museum workshop team has been working for years to restore it to its original condition as at its 1969 world premiere.

In the autumn of 1969, the 914 was presented at the International Motor Show (IAA) in Frankfurt as Germany’s first mid-engined series sports car. There were two variants: the 914 model with four-cylinder engine, as VW Porsche, and the 914/6 with six-cylinder boxer, as Porsche. Fifty years later, the Porsche Museum is dedicating a special exhibition to this series. You can visit “50 Years of the 914 – typically Porsche” from 2 June to 7 July. What’s more, on Sunday 2 June, 914 owners’ clubs have been invited by the museum to a get-together on the courtyard, with over 120 privately owned 914 models.

Ten years ago, the sports car manufacturer entered an entirely new market sector with the Panamera, the first four-door Porsche saloon. Presented to the public for the first time in 2009 in Shanghai, the Panamera made use of numerous technical innovations that had never before been available in a luxury series model.  The Porsche Museum is working together with the Porsche factory in Leipzig, which is responsible for the entire production process including body production and paint shop, to commemorate the “10 Years of Panamera” jubilee, with a special exhibition amongst other things. Eight exhibits will be on show at the Customer Centre this spring, from the first prototypes to the current model.

The Porsche Museum on the road

This year, fans and enthusiasts can rendezvous with the brand if they’re a long way from Porscheplatz too: The first stop is the Retro Classics classic car fair just outside Stuttgart, where the sports car manufacturer will this year be exhibiting in Hall 1 from 7 to 10 March. The Porsche Museum operates a living “Heritage Experience”, bringing together vehicles, and both former and current racing drivers and developers. Another date in the Porsche Museum diary is the “Festival of Speed” at Goodwood in England, which takes place this year from 4 to 7 July. At the world’s biggest motor sports meeting, Zuffenhausen’s lightest race car will take on the famous “Hillclimb” after a 51-year break: With its thin plastic skin, aluminium frame, beryllium brake discs and spherical tank, the 1968-built 909 Bergspyder weighs in at just 384 kilogrammes. Porsche entered the race car category of the European Hillclimb Championship with the 909 Bergspyder in 1968. Competing in just two races, it came in second and third.

Race cars and historic models from the company collection will be in force and showing their typical dynamism at the “Solitude Revival” over the weekend of 20 and 21 July. Former racing and factory drivers will drive classic cars from the Porsche Museum on the legendary Solitude Ring at Stuttgart. In a homage to the original route, the 1962 804 Formula 1, the 1960 Monoposto 718 Formula 2 and the 1956 550 Spyder will be driven on roads blocked off for the occasion. Immediately after that event, the Porsche Museum will take part in the “Ennstal Classic” in Austria from 24 to 27 July, with a selection of classic cars. Spectators at the event will witness a very special début: After extensive restoration work by the museum workshop team, the 1969 Porsche 908/2 will run its first kilometres at the city Grand Prix in Gröbming.

To ensure that Porsche fascination can be investigated at leisure, as well as experienced in the flesh, the sports car manufacturer will also be in attendance at the Frankfurt Book Fair again. From 16 to 20 October, “Edition Porsche Museum” will present a wide selection of its own publications as well as various collaborations with publishing houses.  Among other things, extensive reading material relating to the two 50-year jubilees, of the Porsche 917 and 914, will be available for purchase in the bookshop and museum shop throughout the year.

With “Mission Future Heritage” in mind, the Porsche Museum is set to strengthen its use of modern communications for conveying Porsche heritage and its experience in car manufacturing. As an extracurricular place of learning, the museum is now making its educational material for younger visitors available digitally too, with the new “Team Spirit” app. It is built around the three focal themes of “Aerodynamics and lightweight construction”, “Engine technology” and “Automotive design”, and is aimed at pupils in grades 5 to 12. Young people can work in teams in the museum, using the app on the iPads provided to solve various tasks relating to the company's history, product range and technological developments. In close collaboration with the publisher Klett MINT, the contents of the app have been aligned to the educational curriculum for Baden-Württemberg. For the coming 2019/2020 school year, the future-focused topic of electromobility will be added to “Team Spirit”. One “Team Spirit” session lasts 90 minutes and costs 75 euros for a class of up to 30 pupils.

The Porsche Museum is open Tuesday to Sunday, from 9 a.m. to 6 p.m.. You can find further information and all the dates online at www.porsche.de/museum.

Putting a legendary factory racer onto the public highway

Road Werks: Claudio Roddaro not only owns a genuine 917, but has made it road-legal. 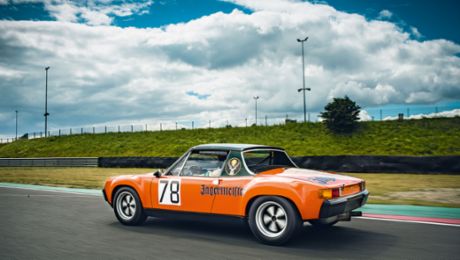 Eckhard and Oliver Schimpf have found the real Porsche 914/6. 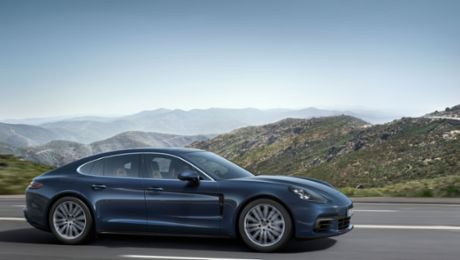 The sports car among luxury saloons

The second generation of the Porsche Panamera is a completely new development.