You’re free to have your own view on ads. But sometimes they do have an element of truth. Especially if the advertised features are so obvious that no more words are needed.

Nice that Porsche still managed to come up with one or the other vocab in their ads for the 911. That gave some people helpful arguments when choosing their own “Heilig’s Blechle“, as Porsche called its 911 back in 1993, declaring it a “family car“ with the unbeatable argument: “You can stay longer for breakfast. You will be back for dinner sooner“. Who could possibly object?

Porsche has more ads of such pure beauty in stock. Starting in 1964 with the first ad for the 911, which was still called 901 at the time, and ending with the latest publication, which says: “Imagine you meet your childhood sweetheart again. And everything is like it used to be.“ They are referring to the new Targa here, but we know a place where we will certainly meet all our childhood sweethearts again – at the Porsche Museum in Zuffenhausen.

Pop art graphics, Avant-Garde Design in the vein of a new era: A bold and clear visual identity at the introduction of the 911.

More text: The nature of driving a Porsche is examined in depth. Many customers, however, think that the long, emotional texts are not appropriate. As of 1984, it becomes short, concise, trenchant.

A new life, boosted self-confidence in times of economic crises: A spectacular market presence with the loud and bold campaign “That’s how you build sports cars.“

Confident, clear, reduced: Intelligence and wordplay instead of a brand claim. Emotional images against a white backdrop define the modern appearance of Porsche ads.

Learn more about each epoch in our galleries. 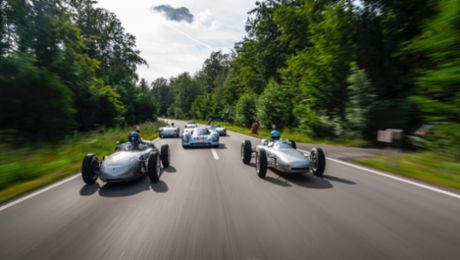