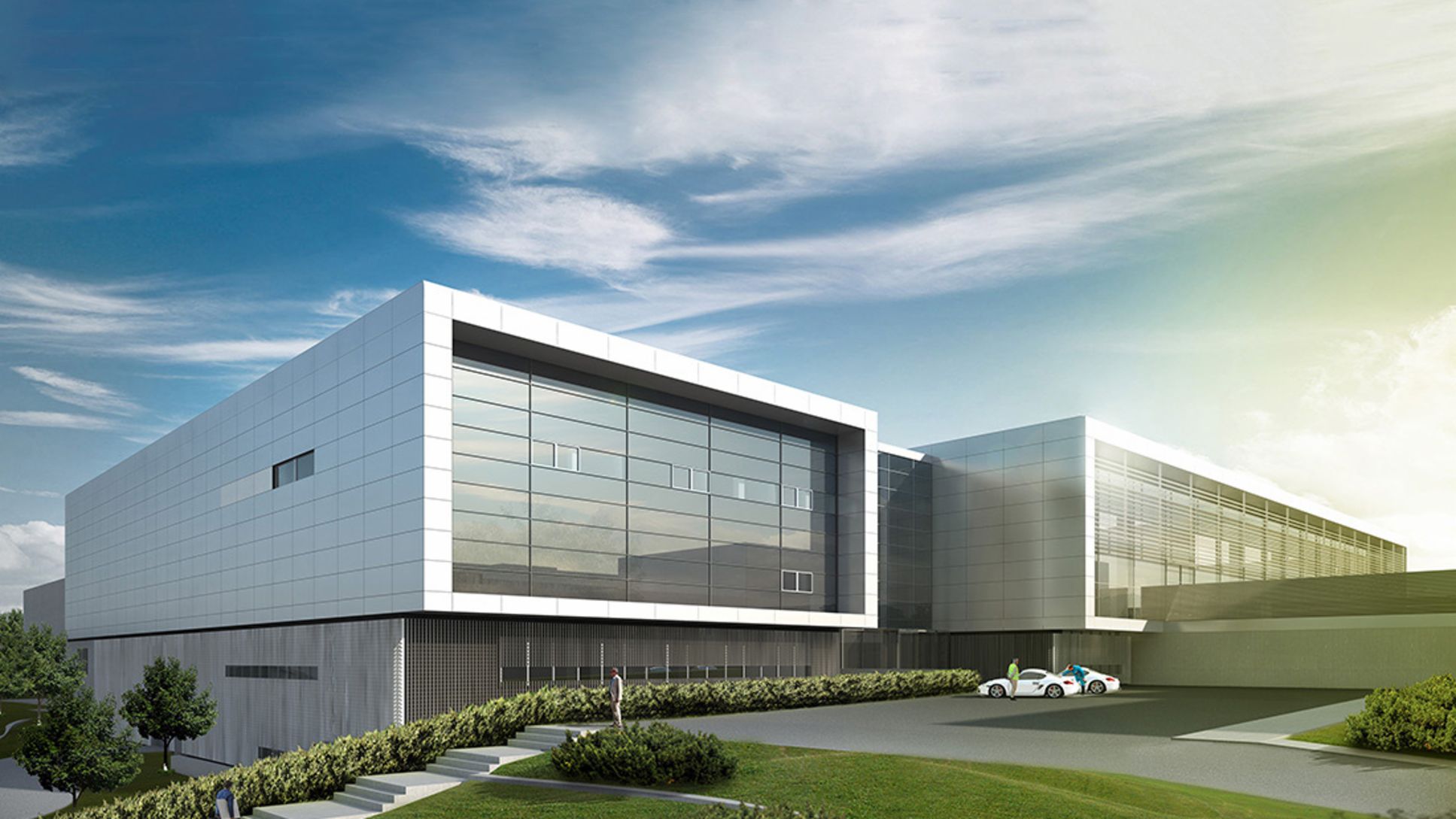 The three most important functions in the early conceptual phase of vehicle will in future be situated under one roof: design studio, concept model construction and wind tunnel.

The new design studio provides the Porsche design department staff, around 100 in total, with optimum conditions for the whole creative process. From the first vision all the way through to the finished form – the entire design development process takes place for the first time within one building. The studios for the styling process, which due to rapid growth had latterly been leased off site, are thus no longer required. The architectural layout of the new studio facilitates a maximum degree of transparency and optimal communication for the entire design development team. It also promotes interdisciplinary interaction with the teams in charge of airflow test benches and concept modelling, which work together with the 'Styling' department within the same building complex.

The design process in the studio now runs efficiently on two levels. The upper level houses the workplaces for exterior and interior design. This is where the new vehicles' initial designs are created on paper or on screen. The new design studio's open interior architecture reinforces team spirit and boosts the creativity of the whole team. The division of space, however, also enables every member of staff to find inspiration in a quiet corner.

The exterior models can then be transported by lift down to the preparation areas on the ground floor of the building and subsequently into the directly adjoining wind tunnel, where their aerodynamic qualities are tested. The designers and aerodynamic experts thus very quickly gain valuable information about the interplay between stylistic elements and physical criteria – such as the individual vehicle's Cd value or downforce.

The concept model construction facility – from a process perspective ideally incorporated on the ground floor between design area and wind tunnel – acts as a service provider, not least for the these two departments now situated directly upstream and downstream of it. The facility's model workshops and the 'Rapid Prototyping' department also support all other Porsche development departments in the production of prototype components. Also created in these areas, which for reasons of secrecy are strictly shut off, are the concept vehicles, which often exist only as one-offs. These include cars pioneering new technologies, production car prototypes at a very early stage of development and show cars for demonstration purposes. The technical highlight of the concept model construction facility is a 116-ton, 5-axis portal milling machine, which has a drive system fitted with linear motors that enables it to cut highly precise 1:1 scale vehicle models from a single block in a very short time.

The side-by-side arrangement of studio, concept model construction and wind tunnel eliminates the need for time-consuming transportation of the models between the previously widely dispersed different disciplines. The models also no longer need to be laboriously camouflaged for such transportation. In addition to achieving optimum inward transparency the new studio also ensures maximum outward secrecy. Even the woods adjacent to the studio form part of the site. There is thus no chance of any curious, prying eyes getting sight of the designers' secret work.

In the exterior studio it is possible for a row of up to seven original size models to be modelled and to be reworked by machine. Here too, transparency and communication play a major role. Each employee is able here to see not only one's 'own' model, but all the others as well. This transparent floor layout encourages creative interaction between all studio staff.

The impression of colours and materials of the interior and exterior of future vehicles can be assessed both in a lighting laboratory and 'for real' outside in an open courtyard accessible via the 'Colour & Trim' studio.

The spatial concept includes a presentation area that facilitates the parallel display of original size physical vehicle models and digital models likewise on a scale of 1:1. While the physical clay models stand on rotating platforms, the digital virtual reality models can be seen projected in the background on LED walls. At this stage every vehicle has to demonstrate proof of the unification of tradition and innovation and thus of the carrying forward of the Porsche DNA. For even in times of change, the typical 'engineered and designed in Weissach' characteristics of a Porsche remain preserved.