A working day at Porsche

Porsche is showcasing itself in a brand-new film. But for once, it is not the company’s vehicles that are the focus of the film, but rather the company’s employees.

Being a part of the Porsche brand is a lifelong dream for many people. The company’s top positions in employer rankings and awards such as the recent “Automotive Top Career Award” are testament to this fact. “But that’s no reason for us to rest on our laurels”, says Member of the Executive Board for Human Resources Andreas Haffner. “We need skilled employees, particularly when it comes to tackling challenges of the future such as the Mission E, when we are in direct competition with other automotive manufacturers, suppliers or IT companies.”

The work of the HR Marketing and Recruitment (MEM) department picks up on this particular point. “We want to give Porsche a face and show that behind all the great products we offer and the exciting work we do, we have colleagues working in a wide range of areas”, explains Konstanze Marinoff, who heads up the department. The new employer film is also set to help in this regard going forward. The film will be used in any presentations Porsche gives in schools, for example, as well as appearing on the Internet.

A tour of the Porsche company

The film depicts a day at Porsche from the perspective of an employee. Embarking on a tour of the company, the employee meets colleagues from a range of specialist departments. The video was filmed over four days at sites in Weissach and Zuffenhausen – including the design studio, the test area, a casino, the new training centre and the production department. Around 50 colleagues in total were involved, at times appearing as extras.

The film, entitled “A day in the life of Porsche – never a humdrum experience”, was recently presented with the HR Excellence Award. In the final round, the video was able to see off rival entries from Stihl and Continental, impressing the panel with its stirring music, genuine images and extraordinary perspective. Watch it here: 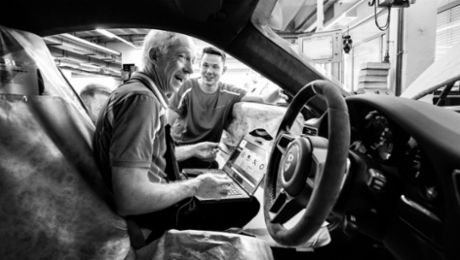 Glassdoor announced the winners of its "Best Employer 2020" award. Porsche is number one in Germany for the first time.

On the sidelines of the Porsche Tennis Grand Prix, Julia Görges was a guest at the Porsche Health Centre.

Faithful Service: Half a Century as a Porsche Mechanic

Larry Moulton of Porsche Salt Lake City has been servicing cars since 1962, a year before the debut of the 911.