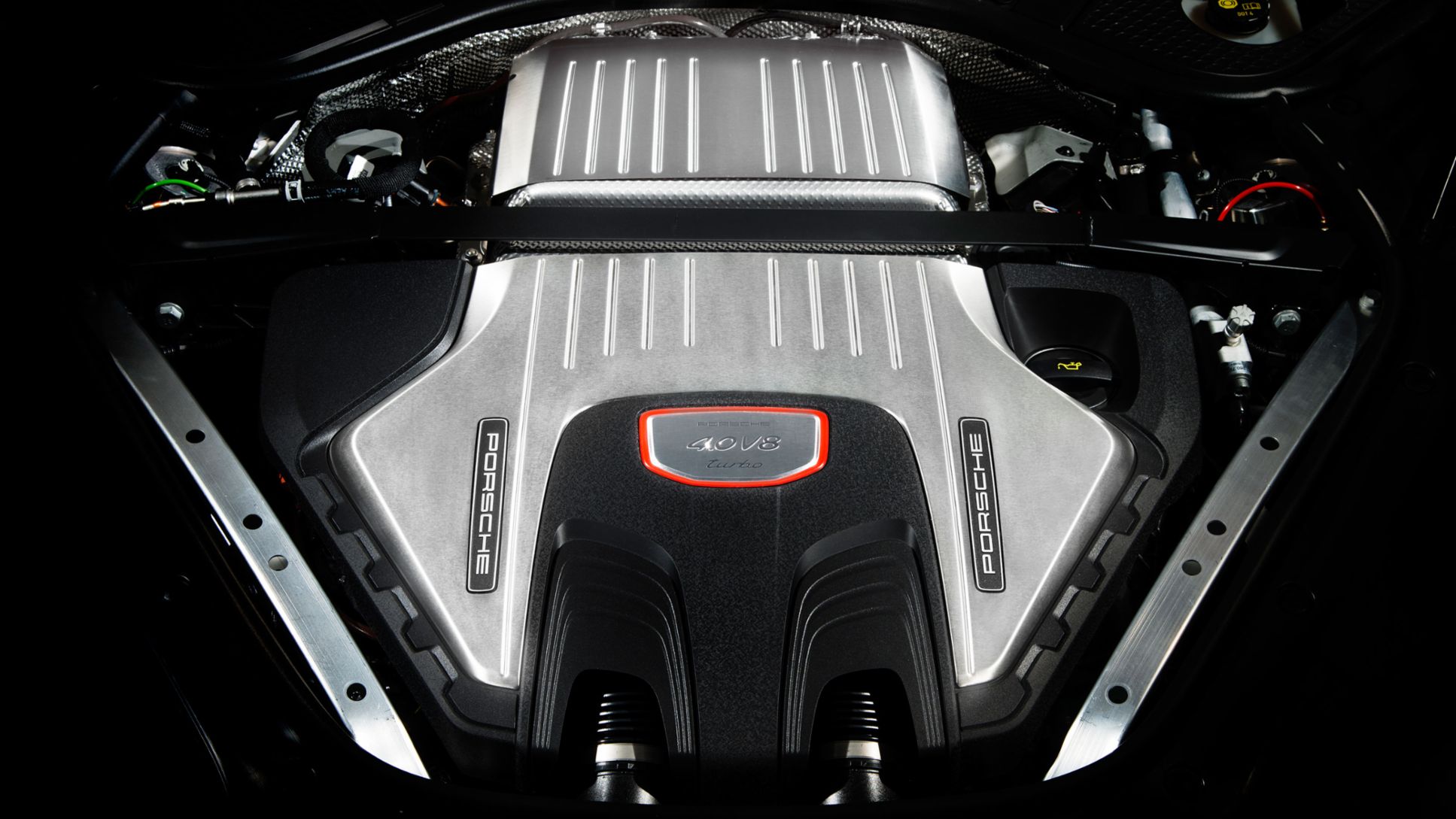 The eight-cylinder V-engines from Porsche

The fourth generation has now begun. Four decades of Porsche experience with eight-cylinder V-engines have been built into the new top engines of the Panamera.

A powerful history: Each generation was developed to be a high-performance powerplant. The 928 and Cayenne, Panamera and 918 Spyder attained superior driving performance with these engines and advanced to become the sportiest vehicles at the top of their segment.

July 8, 2016 marked exactly 40 years since it all began: in the early morning hours, a Porsche sports car which was an entirely new development left the development centre in Weissach for the first time without camouflage. Under the bonnet was an engine that had never been implemented at Porsche before: an eight-cylinder engine whose cylinders were arranged 90 degrees to one another in the form of a V. It is true that Porsche had already built engines with eight combustion chambers back in the 1960s and 1970s. However, they had a flat engine layout, and they were air-cooled and only used in race cars. The water-cooled V-engine served a different purpose. Starting in 1977, it was designed to power the 928: the first Gran Turismo and the third model line from Porsche.

Porsche begins a new chapter in engine building with the V-engine:  The eight-cylinder engine consisted practically entirely of lightweight alloy. As is typical of Porsche, it introduced a new era of engine building. This was the first time in Europe that an engine was leaving the assembly line whose cylinder linings were etched from cast aluminium. The 4.5-litre engine had a conspicuously low compression ratio of 8.5:1. This meant that it would be able to use regular petrol with 91 RON without any issues, which was very important to Porsche. However, this also limited power yield, which was still at the lower end of the range of possibilities. The eight-cylinder engine produced 176 kW (240 hp) at a moderate 5,500 rpm, which was sufficient for a top speed of 230 km/h. The engine’s nominal torque was 350 Nm at 3,600 rpm.

Gradually, Porsche engineers leveraged the potential within the eight-cylinder engine. The 928 S made its debut at the IAA car show in 1979. Its engine had bores that were two millimetres larger, which resulted in an engine displacement of 4.7 litres. Its compression ratio grew to 10.0:1, which required the use of super petrol. However, the powerplant sparkled with a substantial power increase to 221 kW (300 hp). This allowed the 928 S to break the 250 km/h speed barrier. Later, another boost of the compression ratio and a switch over to electronically-controlled fuel injection brought another increase in power to 228 kW (310 hp).

Catalytic converter and four-valve-per-cylinder technology take hold: Porsche engineers played their next trump in 1986. Over the course of introducing catalytic converter technology, including in Europe, the eight-cylinder engine got its most in-depth redesign. The new CAT version had completely redeveloped cylinder heads with four valves per combustion chamber and two camshafts per cylinder bank. Increasing the bore to 100 mm enlarged engine displacement to around five litres. The eight-cylinder engine with emissions control launched with 212 kW (288 hp). Its power limit was set by its low compression ratio, because at first only regular unleaded petrol was available throughout Europe. This barrier fell in 1987 with the introduction of the 928 S4, whose five-litre engine was designed for super petrol and now had an output of 235 kW (320 hp). After two years, a GT variant was built, which attained 243 kW (330 hp) thanks to sharper valve timing control. Production of the 928 model line ended in 1995, and this also represented the end of the first era of eight-cylinder V-engines from Porsche.

The second generation of eight-cylinder engines for the first Cayenne: Seven years later, a third Porsche model line with a new eight-cylinder engine caused quite a sensation. The sports car manufacturer had embarked on new terrain with the Cayenne. The new engine family with its completely new design consisted of two engines. The 4.5-litre naturally aspirated engine in the Cayenne S already had an output of 250 kW (340 hp). The new top-of-the-line eight cylinder was an engine in its own league with twin-turbo charging and 331 kW (450 hp) of power from the same base engine. It catapulted the Cayenne Turbo into the top field of the fastest SUVs of its time.

Three years after the turbocharged eight-cylinder engine made its debut, Porsche went to work to develop it into the engine of the Cayenne Turbo S. 383 kilowatts or 521 hp at 5,500 rpm – this made the new SUV the second most powerful production Porsche car ever built – after the Carrera GT.

Direct petrol injection boosts power and improves fuel economy: In 2007, Porsche presented a revised Cayenne model line-up whose engines were switched over to direct petrol injection. To boost power, bores that were three millimetres larger increased engine displacement to 4.8 litres. The Cayenne Turbo also received new turbochargers with larger radial turbines. Afterwards, the eight-cylinder engine in the Cayenne S had an output of 283 kW (385 hp). The turbo engine now output 368 kW (500 hp) of power. The introduction of direct fuel injection was a key factor in reducing fuel consumption figures of the Cayenne models in the New European Driving Cycle (NEDC) by an average of eight per cent.

In 2009, Porsche presented the Panamera as its fourth model line, and with the Gran Turismo two more development stages of the eight-cylinder engines. The modified exhaust system and optimised engine control of the naturally-aspirated engine produced 294 kW (400 hp) of boosted power and a nominal torque of 500 Nm. In the Panamera Turbo, the 4.8-litre V8 twin-turbo engine provided 368 kW (500 hp) and a maximum torque of 700 Nm. The extended use of lightweight alloys and design improvements also reduced engine weight by several kilograms. Less than one year later, these engines were introduced into the Cayenne models as well.

Eight-cylinder engine from motorsport for the 918 Spyder: When the third, completely re-engineered eight-cylinder V-engine from Porsche went into production in 2013, it wasn’t the engine itself that was the primary focus of attention, rather it was its counterpart: the electric drive. The 918 Spyder was the first super sports car to implement a hybrid drive system.

Its primary source of power was a tamed race engine. At 132 hp/litre displacement, it had the world’s highest specific power of a street-legal naturally-aspirated engine, and at the same time it was the lightest production naturally-aspirated V8 engine, weighing 135 kilograms. Rotating inside the eight-cylinder engine with its usual bank angle of 90 degrees was a flat-plane crankshaft with 180 degree offset crank throws for the connecting rods.

The 4.6-litre engine was derived directly from the engine of the successful RS Spyder. It had a power output of 447 kW (608 hp) at 8,700 rpm. Porsche engineers developed direct fuel injection with centrally located solenoid injectors – an especially efficient and low-emission combustion process. These injectors send fuel into the combustion chambers at pressures up to 200 bar via seven holes each. Extensive lightweight design measures resulted in such features as titanium connecting rods and thin-walled low-pressure castings of the crankcase and the cylinder heads.

The eight-cylinder V-engine emotionalised the 918 Spyder by its performance capabilities and by its sound. In addition to the ignition sequence, this is attributable first and foremost to what are known as the “top pipes”: the tailpipes terminate at the upper part of the rear end directly above the engine. No other production vehicle used this solution. The top pipes’ greatest technical benefit is optimal heat rejection, because the hot gases are exhausted via the shortest possible path, and exhaust gas back pressure remains low.

This type of HSI engine design – where HSI stands for “hot side inside” – the 918 engine created a definitive foundation for the new eight-cylinder engine of the Panamera. It contains the quintessence of four decades of eight-cylinder V-engines by Porsche.

More information about the eight-cylinder V-engines from Porsche. 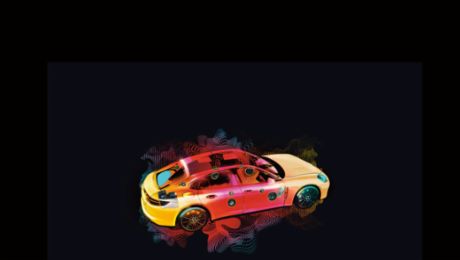 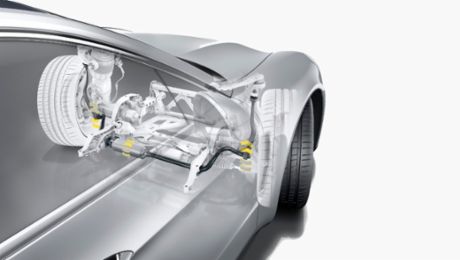 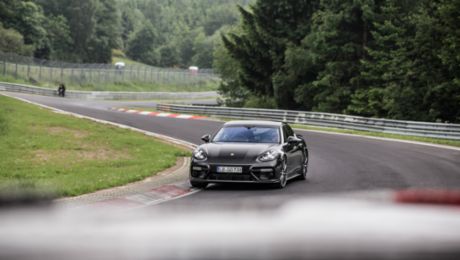