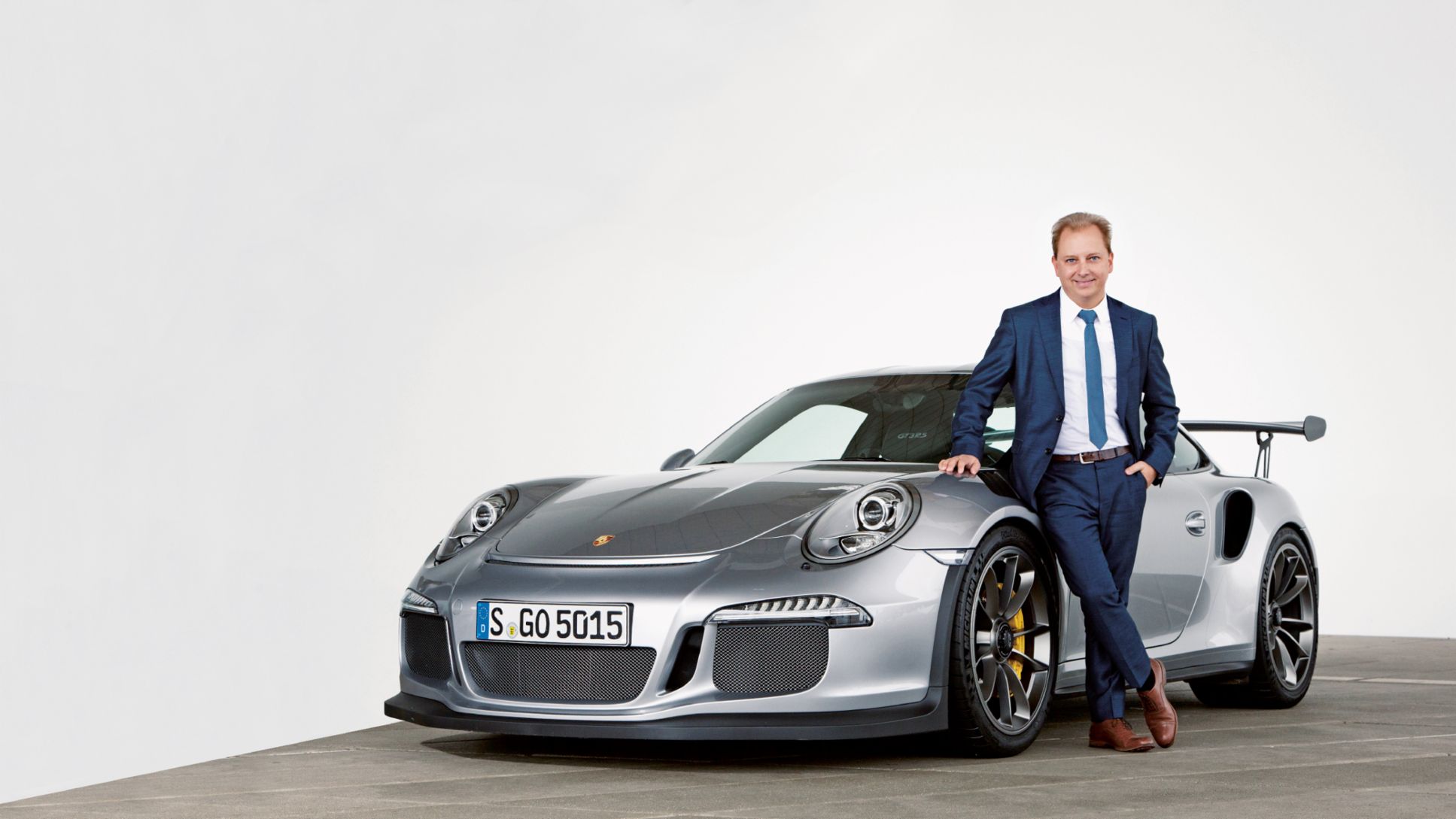 As Managing Director of the newly formed Digital GmbH, Thilo Koslowski aims to promote connectivity at Porsche even further. It comes at the perfect time – because an automotive renaissance is imminent. An interview with the technology expert.

From Silicon Valley to Zuffenhausen – was that a difficult decision?
Thilo Koslowski: No, I gave it careful consideration, but in the end I was motivated by the challenges and the opportunities available at Porsche. The reorientation of the automotive industry is now taking place in Silicon Valley. That’s where the capital is, and that’s where a lot of key actors and companies are located. And there’s a completely different mentality there: It’s where problems are seen as opportunities. People want to conquer things, discover new frontiers.

And now you’re discovering new frontiers for Porsche?
Absolutely. Porsche has fascinated me since I was young—the sportiest cars, the most emotional brand. My goal now is for Porsche to become the number one player in the digital dimension as well. But that will only work if we broaden the field of activity that we have, to date, defined for the company and the automotive industry.

How do you aim to achieve that?
We can boost the fascination that our cars inspire and make them more interesting, and also identify innovative new products, services, and business opportunities for the company. In doing so, the key focus remains on creating a consistent, typically Porsche customer experience. The digital customer of the future should not only experience Porsche when he or she is sitting in the car, but outside of it as well. Take parking, for example. Here we’ve already invested in the Cologne-based start-up Evopark, which is automating the use of, and payment for, parking garages. This means not having to purchase a ticket every single time in future— the parking fees are simply debited later on.

Are collaborations like this always forged from your headquarters in Ludwigsburg?
Not only. We won’t have just one, but multiple locations—for starters, one here and one in Silicon Valley. We’re planning additional locations in Berlin and Shanghai. At the same time, we are currently seeking skilled people with passion and energy who want to help shape the future of Porsche.

There are already departments at Porsche that concern themselves with topics such as these. Why do we need a separate company for this?
Having a separate company gives us certain organizational freedoms. We require a maximum of agility and don’t want to disrupt the vehicle development processes already established at Porsche. When you build a car, you have to adhere to the individual process steps exactingly. When it comes to the digital strategy, that’s not always necessary—the digital world is constantly changing.

How can Porsche AG best profit fromDigital GmbH?
The objective being pursued by Digital GmbH is to continue capitalizing and building up on the success of our current business model and the existing team. In practical terms, we will achieve that by interconnecting with Porsche AG — the employees of Digital GmbH will, for example, work directly with the colleagues in the technical departments. There are already a lot of productive activities going on at Porsche relating to digitalization. Our task now is to develop an overarching strategy and to unite all existing and new ideas, projects and teams. We therefore consider Digital GmbH to be a broker as well. This is a type of organization that manages to bring the automotive and digital worlds together. I’ve been working in a similar capacity for 20 years now.

…most recently for the IT consulting company Gartner Inc. …
I’ve always loved cars and technology, and have always had a keen interest in envisioning how to impress customers. When I arrived in Silicon Valley and noticed how differently companies operate, and how differently people think, and everything that technologies can accomplish when they are combined, I developed a vision: the vehicle as the most innovative, most exciting and the ultimate mobile device, which is capable of uniting the physical and virtual dimensions like no other technology can, thereby making it a central component of the lifestyle of the future. That was back in 1997. At the time, the internet was starting to become more and more prevalent. Then its use was no longer exclusively limited to the PC, and it started being utilized on all the other devices that we carry around with us—the so-called “Internet of Things,” or “IoT” was born. IoT is a reality today and offers companies and people real benefits.

How do you use the IoT privately?
I’ve installed cameras in my house in Silicon Valley, for example. When we’re not home, if anything out of the ordinary happens, it’s displayed on my smartphone. And in my kitchen, for example, I have an Amazon Echo device equipped with the virtual adviser “Alexa”. I can interact with Alexa—I tell her what music to play, for example, or that she should open the garage door and turn on the lights outside.

And in the future, cars will be able to take care of all that?
Yes, because we’re entering the era of the “Internet of Cars”. My smartphone won’t take me from point A to point B in the future either; I’ll still need my car for that. But if my car can now do more than ever before, my smartphone might suddenly stop being quite so important. I call it the renaissance of the car.

Has this insight already caught on at the automobile manufacturers?
I think that they have definitely been given a wake-up call. It’s no longer just about a car that can take me to my destination as quickly as possible, but one that also reflects my digital lifestyle. The next five years will bring more changes to the automotive industry than the previous 50 years did. Cloud computing, increasingly powerful processors and sensors, mobile devices, artificial intelligence, data—Big Data is, after all, always the keyword—and, of course, connectivity of the car, are coming together here in a completely new way. These technologies encounter new mega-trends such as sustainability, urbanization, new business models and new customer expectations, and are leading to an automotive Big Bang that will redefine the tech-centered car universe.

What will a Porsche look like in the future?
A Porsche will still have the typical, established dimensions of a Porsche, which people love, and will continue to define the industry benchmark—for example in terms of design, performance and the emotional experience. A Porsche will always be something special that people aspire to. On top of that, in future a Porsche will also be a leader in terms of new technologies.

Even in the area of autonomous driving?
The self-driving car is coming—even at Porsche. It has become a qualifying characteristic in order to be considered smart. Obviously, I want to drive a Porsche myself, first and foremost. But I also want to be able to press a button and so it does that on its own, for example in a traffic jam. And then the car should also talk to your calendar right after, and tell it that you’ll be late. Why should you have to do that as the driver? The car has to do that. It should notice if you’re tired and maybe then take responsibility. It should notice what you still have to do and perhaps do some online shopping for you. And when there’s no congestion on the road, the Porsche of the future will be able to show the customer how a pro like Walter Röhrl would drive the car.

Speaking of competitors: What do you think of Tesla?
One shouldn’t underestimate Tesla just because they’re not posting profits. A lot of carmakers were in the same boat when they started out. In Silicon Valley, Teslas are now as prevalent as Toyota Corollas used to be in the US. It’s become a sort of status symbol: If I live in Silicon Valley, I buy the most tech-focused car, and to date that’s the Tesla. We have to change that, and we have excellent products that will provide the basis for that.

Perhaps one day soon people will be buying an Apple or a Google …
In 2011, I predicted that in 2016 one of the big tech companies would announce that they were releasing a car. Apple could definitely be successful with that. Google tends to concentrate on collaborations, but that has consequences for the automotive industry as well. There are also many Chinese companies coming to the fore. For them, money is no object. At the same time, these new companies have to prove that they have the knowledge and expertise to develop and manufacture vehicles, and that they have the capacity to offer inspiring products that motivate trust. Porsche has been doing that with great success for many decades and the brand has fans around the world. Full stop. Apple, Google and the rest still have to earn that. 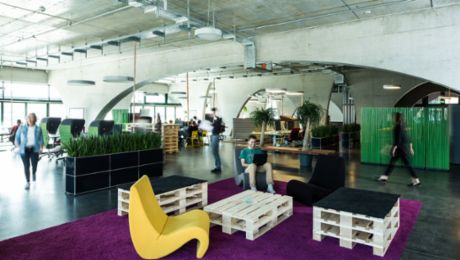 Porsche is moving one step closer to digital transformation. 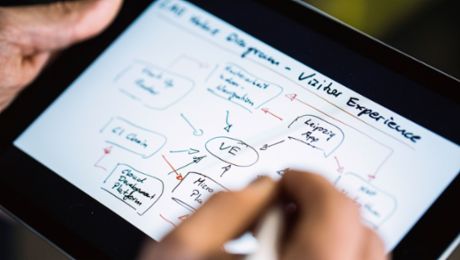 Here's where the future is imagined

The Porsche Digital Lab has opened in Berlin. 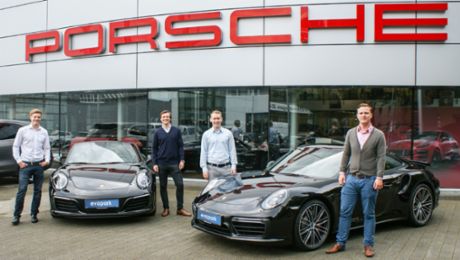 This stakeholding is the first by Porsche Digital GmbH since it was founded in May 2016.