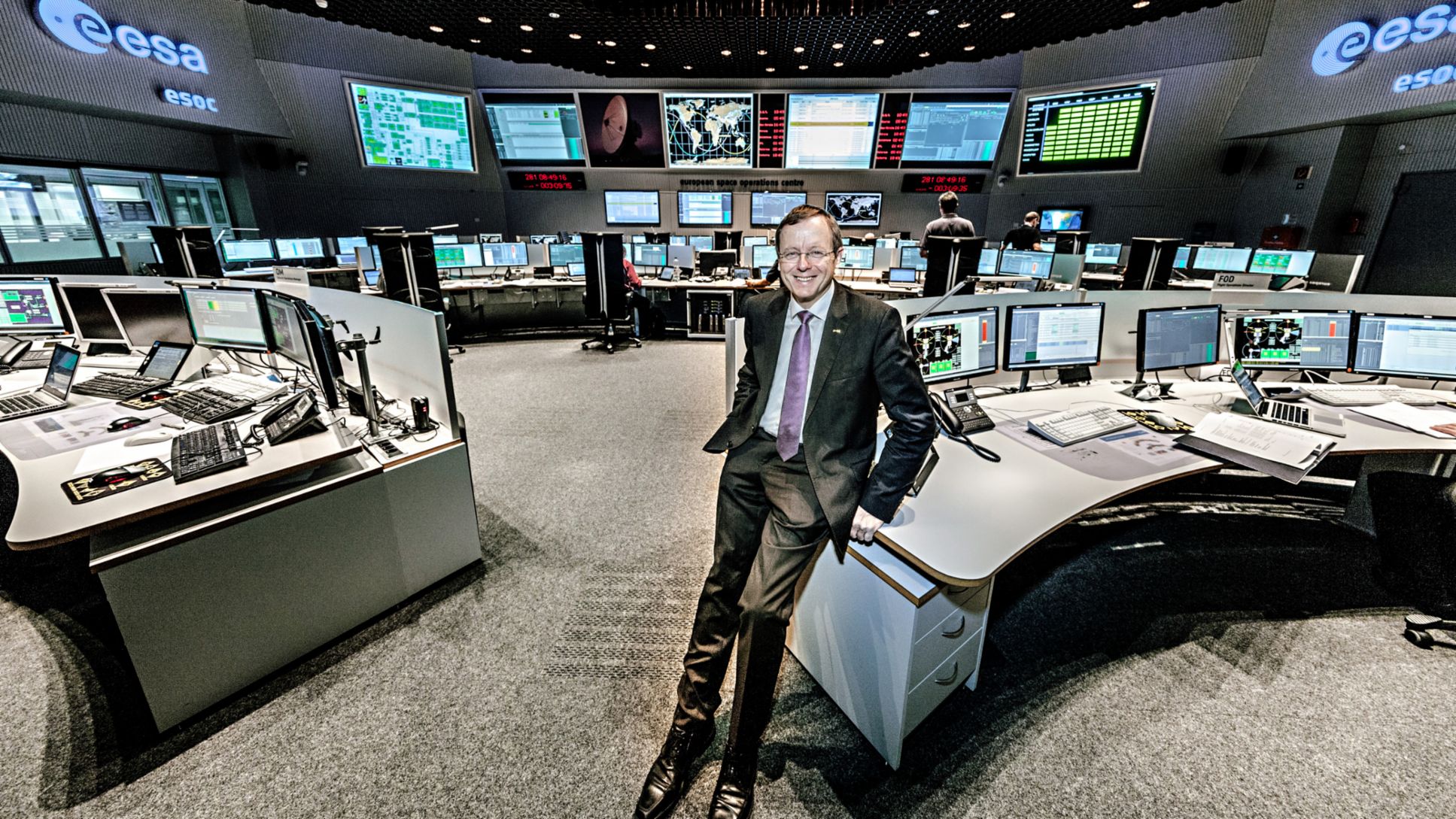 Professor Johann-Dietrich Wörner, Director General of the European Space Agency (ESA), explains how “Space 4.0” is generating new business models. And why the future lies on the Moon and Mars.

The 22 member states of the European Space Agency invest 4.5 billion euros a year in space research. Why is that?
Professor Wörner: Humans are driven by curiosity. That is what drew us out of our caves and what created our modern societies. We know just a tiny fraction of the universe—which in itself is reason enough to do more research. And upon closer inspection, we’re always encountering new questions. Let’s take the Big Bang: the universe has been expanding ever since. Gravitational forces should be slowing down this movement, and in fact it did slow down for quite a while but has now been accelerating again over the past few billion years. We don’t know what is causing the faster expansion of the universe, so we talk about dark energy. Dark energy and dark matter, the other big unknown, make up 96 percent of the universe. If you look at it this way, we haven’t understood anything at all.

Are scientists stuck in a holding pattern?
Although progress might appear to be modest at times, we have already achieved quite a bit. If it weren’t for satellites, for example, we wouldn’t have any modern navigation systems, global TV transmissions, or precise weather forecasts. We’re also working on gaining a better understanding of climate change. Maybe this will help us find a way to achieve our climate goals.

Can you tell us about “Space 4.0”?
Just like industry, astronomy has gone through various stages of development. We started by making observations here on Earth, then came the Space Race in the 1950s, and we have recently entered a stage of international cooperation. The fourth level will be marked by high degrees of commercialization and democratization. Until just a few years ago, access to space was limited to a few elite individuals, but now nearly everyone can make free use of the data and information on the Internet such as Google Earth. Many private companies are using the results of space research, such as Earth observation, to develop new business models. In agriculture, images of the Earth can contribute to making fertilizer use more efficient. Another sector is space travel. Companies like Virgin Galactic are already offering sub-orbital flights for tourists. The SpaceX company wants to fly to Mars. Space travel is drawing a large amount of private investment right now, which will fuel it all the more.

How is the European Space Agency keeping itself young and fit for the future?
We will no longer be micromanaging every area; instead, we will promote projects that assign clearly defined responsibilities to government and private funding. We are already working closely and very successfully with telecommunications companies to develop new products. A further example is the Ariane carrier rocket. Ariane 1 through 5 were developed by the ESA. For Ariane 6, we and the member states have jointly specified what it has to accomplish and how much funding is available. Now it’s up to industry to build a good carrier rocket on this basis.

What opportunities arise from working together with suppliers?
We have an industrial policy mandate from each member state, which we have to fulfill. And of course we base our calls for tenders on that. We always try to award the contract to the best European supplier. There are only a few large companies in the aerospace sector in Europe. The boom taking place here right now also offers opportunities to many innovative and specialized small and medium-sized companies.

For a long time, NASA called the shots for missions into space. What is the current status of European space exploration?
In September 2015 NASA, announced the discovery of liquid water on Mars. The ESA had already found water ice there ten years earlier. And in 2014, we made the first landing ever on a comet, with the Rosetta mission. So Europe is playing a very relevant role in aerospace worldwide. One advantage of our role is that we can be a mediator. The ESA enjoys superb relations with both the East and the West, which means we can develop joint projects. Rosetta, for example, used some American technology, such as certain sensors. And we’re also on board the U.S. missions—with the European Service Module on the Orion spacecraft, for instance.

What joint projects is ESA looking at for the future?
The International Space Station (ISS) has done a lot to advance research, but it only has about another ten years. One possible successor project would be a type of Moon village. That doesn’t mean half a dozen homes, a bar, and a gas station—really, I’ve already received inquiries from people who want to be mayor! No, by village I mean a project in space that would be sustained by various agencies on Earth. A project that different countries could fully participate in, by funding a spaceship or a telescope, for example, or by providing astronauts.

Is it conceivable that people will live permanently in space?
Not only conceivable but necessary. About 13.8 billion years have gone by since the Big Bang. In a few billion years it will become too hot on Earth for us to live here. If you compare the time that has elapsed since the Big Bang to a year, then we’ve got a little more than a month left. So we’ll have to leave Earth, if we can manage to still be around by that time. But I’m convinced that we’ll succeed in doing so much sooner. We’ll surely have a station on another celestial body in the next hundred years. And that will be Mars.

When would you yourself like to travel in space?
I’ve been traveling in space for 61 years—on an incredible spaceship called Earth. But I’d like to have a chance to leave Earth, too.