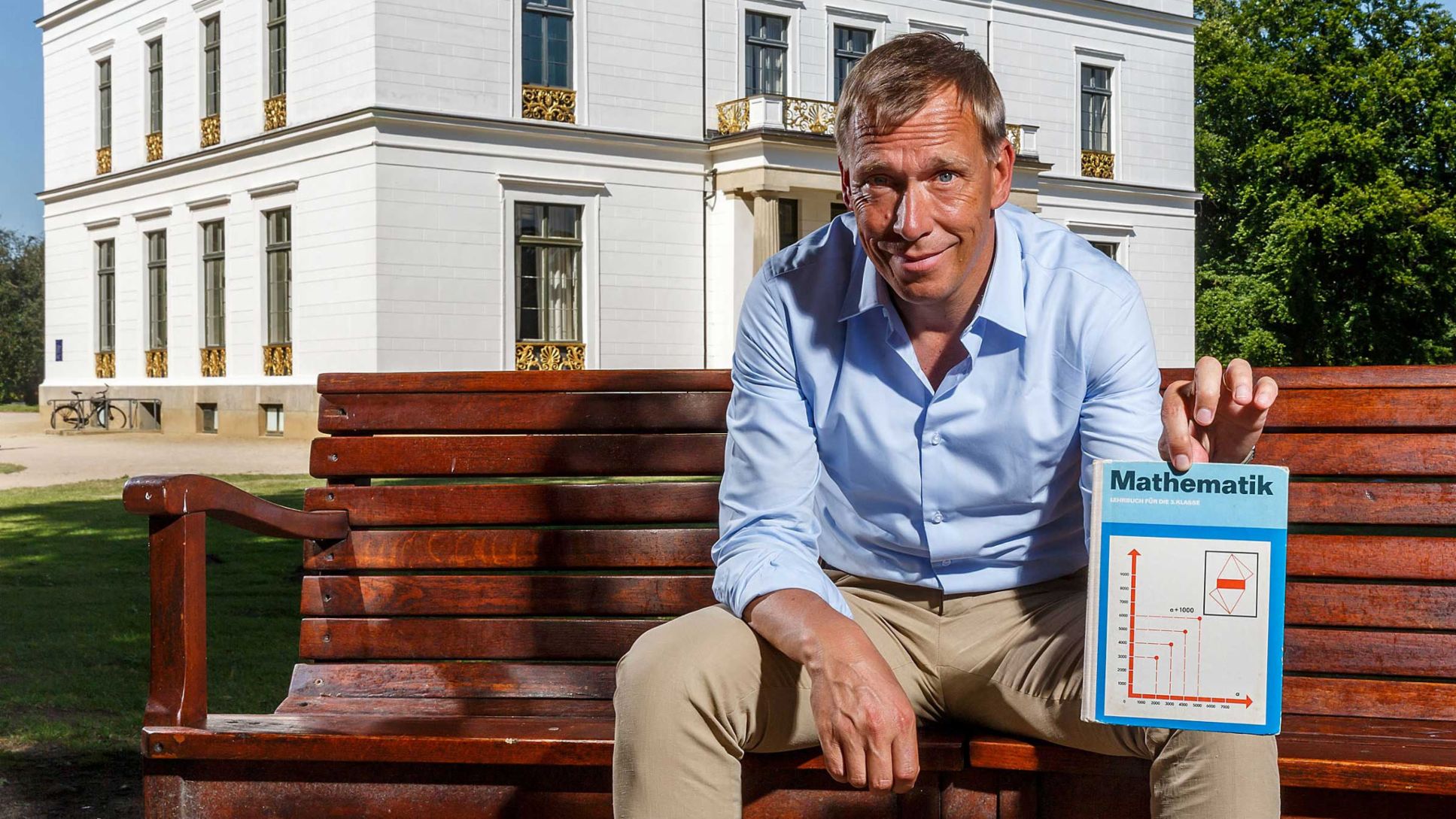 Will this man do away with schoolbooks?

Arndt Kwiatkowski: How the founder of the ImmobilienScout24 online marketplace wants to revolutionize math classes.

It’s a sunny day in Hamburg. Arndt Kwiatkowski—born in 1962, athletic build, tanned complexion – strolls on the lush grass of Jenisch Park in the district of Othmarschen. There’s a splendid view of the Elbe River and its sailboats and freighters from here. The founder and former managing director of ImmobilienScout24 loves this city. But he spends his weekdays working in Berlin. He wants to start a revolution from there. His new company, called Bettermarks, seeks to turn education on its head – all around the world. With the help of a learning program of the same name, Kwiatkowski wants to fundamentally change the way people teach and learn mathematics. “Incremental steps of further development will take you only so far,” he says. “What we’re doing amounts to disruptive change – which is the only way to enter a new dimension.”

Kwiatkowski is no stranger to innovative business models that replace traditional services. In 1997 he founded the German online marketplace known as ImmobilienScout24, which immediately became popular among people seeking to sell their homes or find a place to live (immobilien means “real estate”). “I was captivated by the idea of making the stressful hunt for a new home much easier for many people,” he says. “At that time Germany didn’t really have a start-up culture, and Internet access was just beginning to become widespread.” His idea rapidly turned into a business worth millions, which has made newspaper ads nearly superfluous and in the process deprived their publishing houses of a valuable source of income.

Around ten years later Deutsche Telekom bought into the Company – and the founder and managing director sold out. “I preferred to start something new again,” he says. And the lucrative sale gave him sufficient capital.

Bettermarks is a digital learning platform for children

Kwiatkowski, a father of four, called his new company Bettermarks. And better marks, or grades, are exactly what he wants to help students around the world achieve. Above all in math. Bettermarks is a digital learning platform for children ages nine through fifteen, which gives them problems they can solve on their own along with a lot of exercises. But it can also have a much broader reach. If Kwiatkowski has his way, it will be used primarily by teachers in their classrooms – in place of math books. What books do is give each student the same problems and the same explanations on the same unchanging pages in a limited amount of space. But students’ educational needs vary widely – some children learn faster than others, and where one pupil might be good at algebra, another might be more at home in geometry. The adaptive software from Bettermarks meets each user individually and works in targeted ways to close the specific gaps in his or her knowledge.

“Bettermarks addresses the shortage of qualified teachers,” says Kwiatkowski. “The MINT subjects in particular – mathematics, informatics, natural sciences, and technology – are often taught by non-specialists.” At the same time, universities are not turning out enough teachers with these specialized sets of knowledge. The situation is considerably worse in developing and newly developed countries. This is where Bettermarks steps in. “Pedagogical skills are integrated into the software. The system interacts with the students as though a trained teacher were sitting right next to them. That’s what I call a quantum leap in the ability to convey knowledge.” But make no mistake – Kwiatkowski is not at all interested in doing away with teachers. “Bettermarks cannot replace the motivational abilities of teachers, of course, or the social aspects of learning environments, or the very important effect that teachers have as role models for young people,” he says.

Bettermarks’ educational approach deliberately gives students the greatest possible amount of freedom with respect to how they solve the math problems. That is important in order to encourage creativity, even if the answers or ideas are incorrect. “I’ll give you an example,” says Kwiatkowski and pulls out his tablet. He opens the Bettermarks program and selects an exercise. Not coincidentally, the user interface looks like a blank sheet of paper. “The app is programmed to register every conceivable input and provide meaningful feedback.” An expert team of teachers, educational specialists, mathematicians, and software engineers spent six years doing detailed development work on this interactive platform. Twenty-five million euros were invested in the system. Kwiatkowski is hoping for economies of scale. “We have created an adaptive platform with all the tools needed to put it into practice anywhere in the world. To tailor it to individual countries, we now only need a fraction of the time and funding – one year and 500,000 euros are enough to create a full country version.”

The first big contract came in 2013 from Uruguay. Thanks to a state-sponsored campaign, all of the 395,000 elementary school children in this South American country already possessed a laptop. And experts were on the lookout for adaptive learning content. They found Bettermarks – which is now the foundation for teaching math throughout the country. Thus far there are Bettermarks versions in Spanish, English, Dutch, and German. The program only costs ten euros per student per year. “And for that the schools get an incredible boost in performance – moreover, in a subject with a shortage of specialized teachers.” But the platform has been slow to spread in Germany, of all places. “Germany makes the least use of digital media of all the OECD countries,” says Kwiatkowski. “Also, unlike in Mexico and the UK, we haven’t managed to find a textbook publisher to be a distribution partner. They don’t want any competition for their printed products on the market.”

Around 300 schools in Germany are currently using the software – far too few, in Kwiatkowski’s opinion. He is thinking in different dimensions. “What we’re trying to do is catapult societies and their educational systems forward.” Which is why he is concentrating more on schools than on private households. “It’s like a new type of medicine,” he says. “The school systems have the money and can ‘prescribe’ Bettermarks, the teachers can administer the daily dose – and the students will experience the effect.”

Not only individuals benefit from greater facility with math, but also national economies, which are based on intellectual skills. Studies have already demonstrated the effectiveness of Bettermarks. But progress is slow. “Either there’s no budget, or ministries of education and cultural affairs don’t want to get too involved in educational policy. So we have to rely on initiative taken by committed teachers.” In the meantime, however, some colleges have discovered the software. Engineering and economics students at Heilbronn University are using it to systematically close any gaps in their knowledge. Also, the university only admits students to certain exams after they have completed the exercises and passed the relevant tests in Bettermarks. This is expected to reduce what have traditionally been high dropout rates in these subjects. Kwiatkowski is convinced digital platforms are the future when it comes to learning. “Math is just the beginning,” he remarks at the end of our conversation. Maybe this man really will manage to do away with schoolbooks.

The first attempts at schooling via radio were made back in 1948 in the Australian Outback. In 1951, the first School of the Air was founded in central Australia, in the town of Alice Springs. The teachers came to the school building, but most of the students stayed home and corresponded by radio or phone. Now they use computers. The oldest of the remote schools, it serves students over an area of 1.3 million square kilometers – which is four times the size of Germany, ten times that of England, and twice that of Texas.

E-learning has also arrived at universities, with the USA playing a major role here. One in three American students currently takes courses online. The country has also launched major MOOC (Massive Open Online Course) platforms like Coursera and edX. Elite universities including Harvard, Berkeley, Princeton, Stanford, and MIT offer seminars and lectures to an unlimited number of students. Anyone with Internet access can take these courses by watching the videos and participating in live chats. They can even take digital tests without ever having to enter a crowded lecture hall, and often completely free of charge. Those who want an actual bachelor’s or master’s degree do have to pay: 20,000 dollars for an online MBA from the University of Illinois, for example – although this is a bargain compared to the six-digit figures customary for an ON-campus course of study.