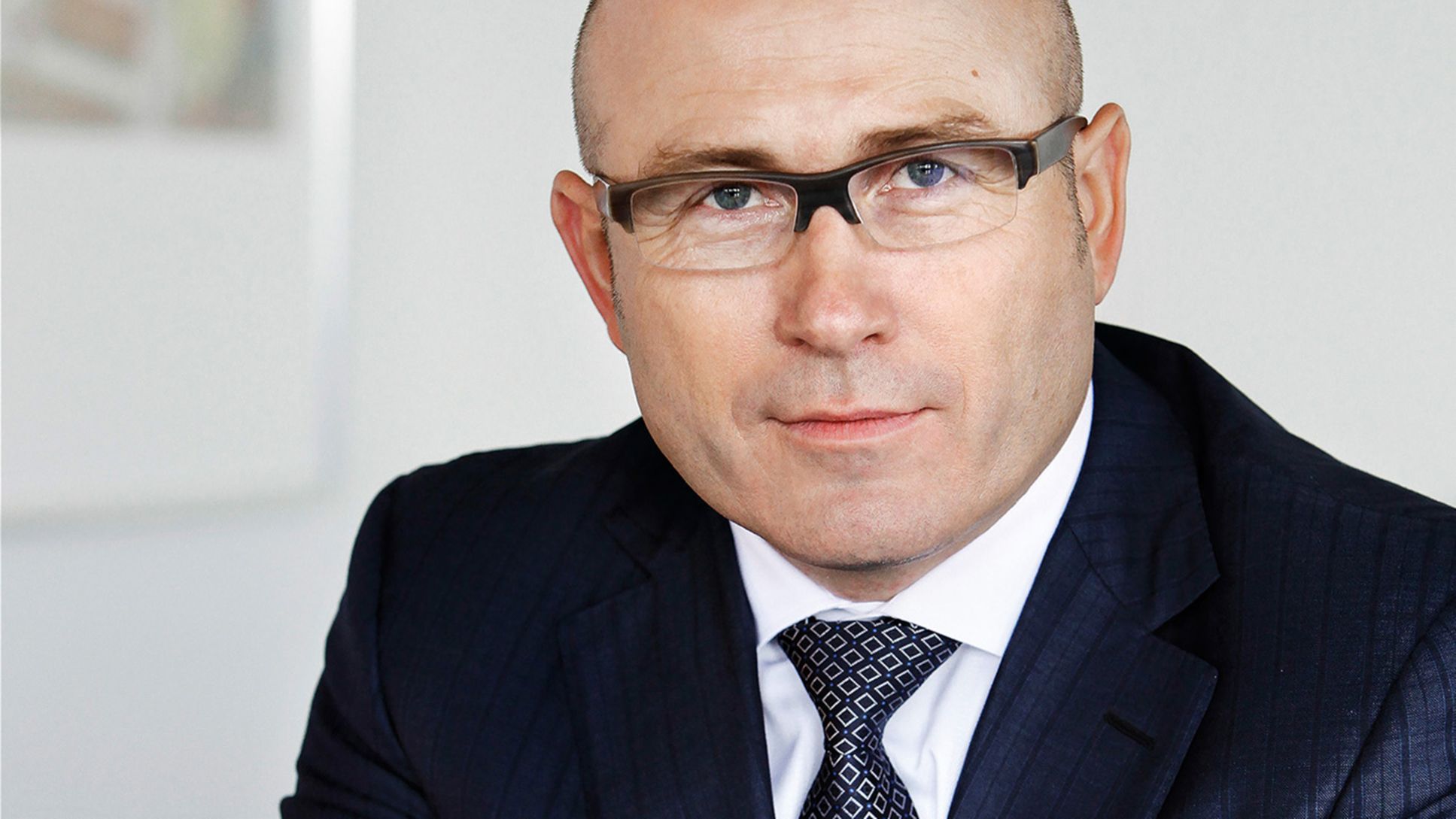 "We aim to present convincing arguments"

Bernhard Maier, Member of the Executive Board Sales and Marketing, communicates Porsche brand values all around the world.

Bernhard Maier has a keen sense for trends. As Executive Board Member for Sales and Marketing at Porsche, it is naturally one of his core tasks to predict developments in the automotive market – and ideally to play a part in shaping them. However, it is not just in his work that he is at the cutting edge when it comes to assessing the benefits of the latest trends and utilising advanced technologies. He is that away from work, as well. As an e-commuter, he is one of the pioneers of a new transport philosophy. He generally covers the 45 kilometres between his home and his office in Stuttgart-Zuffenhausen completely emission-free – in his Porsche Cayenne S E-Hybrid or the Panamera S E-Hybrid.

"Both Cayenne and Panamera are designed for 36 kilometres of pure battery operation," explains Maier. "But through anticipatory driving and coasting, I usually manage the full distance on 100% electric power." Over the coming years, increasing numbers of commuters will undoubtedly share this philosophy, as the wave of hybrid commuters is only just starting to roll. However, Bernhard Maier is not someone who gets carried along on a wave – he prefers to set them in motion himself. Not simply by sending colourful pictures or snappy slogans out into the world. But rather through convincing arguments, such as on the subject of hybrids: "People are just starting to understand that with a plug-in hybrid they have total flexibility in terms of reach and performance," says Maier. "And at the same time, they've got their own electric filling station at home or at the office, which is very convenient." For Maier, motoring of the future does not mean ever more horsepower, but rather "as many ideas as possible per HP," says the Member of the Executive Board Sales and Marketing.

Bernhard Maier has had a passion for high-quality cars since his youth in the town of Schwäbisch Gmünd in eastern Baden-Württemberg. No wonder, then, that his first job was in the automotive sector: in 1979, Maier started his working life as a car mechanic and passed his master mechanic's exam five years later – coming out top in every discipline across the whole country. After taking a degree in business administration in Calw, he did in fact work for a few years for computer manufacturer Nixdorf. In 1988, however, he found his way back into the automobile industry, joining BMW in their sales organisation. Since 2001, he has been responsible at Porsche for the sustained positioning of the brand in the German and international market – since 2010 as Member of the Executive Board Sales and Marketing. "Things at Porsche are actually very simple," explains Bernhard Maier. "It's about products, markets and people. And we simply need nothing but the best of everything." In his work the extremely strong brand is, of course, an ideal starting point for Maier – but it brings obligations with it as well: "Porsche is a legend. A legend with tradition and a future." And in order to live up to this legend, Bernhard Maier is constantly refining the ideal brand and sales strategy, setting the direction and developing the guidelines necessary for enduring communication. Maier is convinced: "Especially in times of great volatility, when the half-life of trends is getting ever shorter, it is essential to have one constant, a clear direction. We have implemented that in our brand and sales strategy." This philosophy, which Maier took the lead in creating, reaches its peak in the core brand concept of 'Intelligent Performance'.

At first glance, the Porsche brand values appear contrary – however, at Porsche opposites such as tradition and innovation, performance and everyday practicality, exclusivity and social acceptance and design and functionality find a sense of harmony and intelligently combine to form the core of the brand. "Strong brands need no claim, but rather a strong core," says Maier.

In communicating these brand values he treads some very unusual paths, such as in 2014 with the opening of a Porsche pop-up store in New York: "We simply wanted to give people an opportunity to get to know us in a totally uncomplicated way." Since then, pop-up stores have opened in London, Shanghai and Moscow as well. Social media also provides this uncomplicated access to Porsche. However, in this area in particular Bernhard Maier needs his fine sense of feel in order to do justice to the exclusivity of the brand: "Of course, we have been successfully active in the digital world for a very long time already," explains Maier. "But in typical Porsche style. We don't buy friends. We aim to present convincing arguments."

Tradition with a future

The Member of the Executive Board for Sales and Marketing therefore continues to make significant use of traditional channels of communication: "The best way to get to know Porsche remains the personal experience of driving a Porsche car. From now until 2018, we will be further developing our sales network," says Maier. "In the future, too, we will thus always be close to our customers." The focus in this regard would be on China: "In 2014, we opened a new Porsche centre there every fortnight." In most cases he was there for the opening in person – for Bernhard Maier affinity with the customer is more than just a promise.

As is customer satisfaction: the aim at Porsche in this regard, he says, being above all to accommodate individual customer wishes. "Our customers are even more individual than our sports cars," explains Maier. However, mere satisfaction is not enough for the Porsche director. "We seek to create customer enthusiasm – through a unique purchase and ownership experience." Besides enthusiastic customers it is, however, in Maier's view above all the employees who guarantee Porsche's ongoing success: "We have employees who are enthused by the brand and who are prepared to go the extra mile for our customers every day." This enthusiasm for tradition-steeped sports car culture, for innovative prowess, style and performance, in short: enthusiasm for Porsche is especially clear to see in Bernhard Maier.

Bernhard Maier was born in 1959 in Schwäbisch Gmünd, eastern Baden-Württemberg. After training as a car mechanic, he began a degree course in business administration in Calw in 1979; in parallel with this he took his master mechanic's exam with the Upper Bavarian Craftsmen's Guild. For two years after that he worked at computer manufacturer Nixdorf. However, he soon found his way back into the automobile industry: from 1988 he took on various management functions for BMW in Germany and abroad, including as leader of the 'International BMW Brand Sales Strategy' project in Munich and as head of Turnaround Sales & Marketing for the Rover / Land Rover Group in Birmingham. In 1999, Maier became general manager of the BMW site in Dortmund, before switching to the sports car sector in 2001 as Executive Chairman of Porsche Deutschland GmbH. Since 2010, Bernhard Maier has been Member of the Executive Board, Sales and Marketing, of Dr. Ing. h.c. F. Porsche AG, Stuttgart.