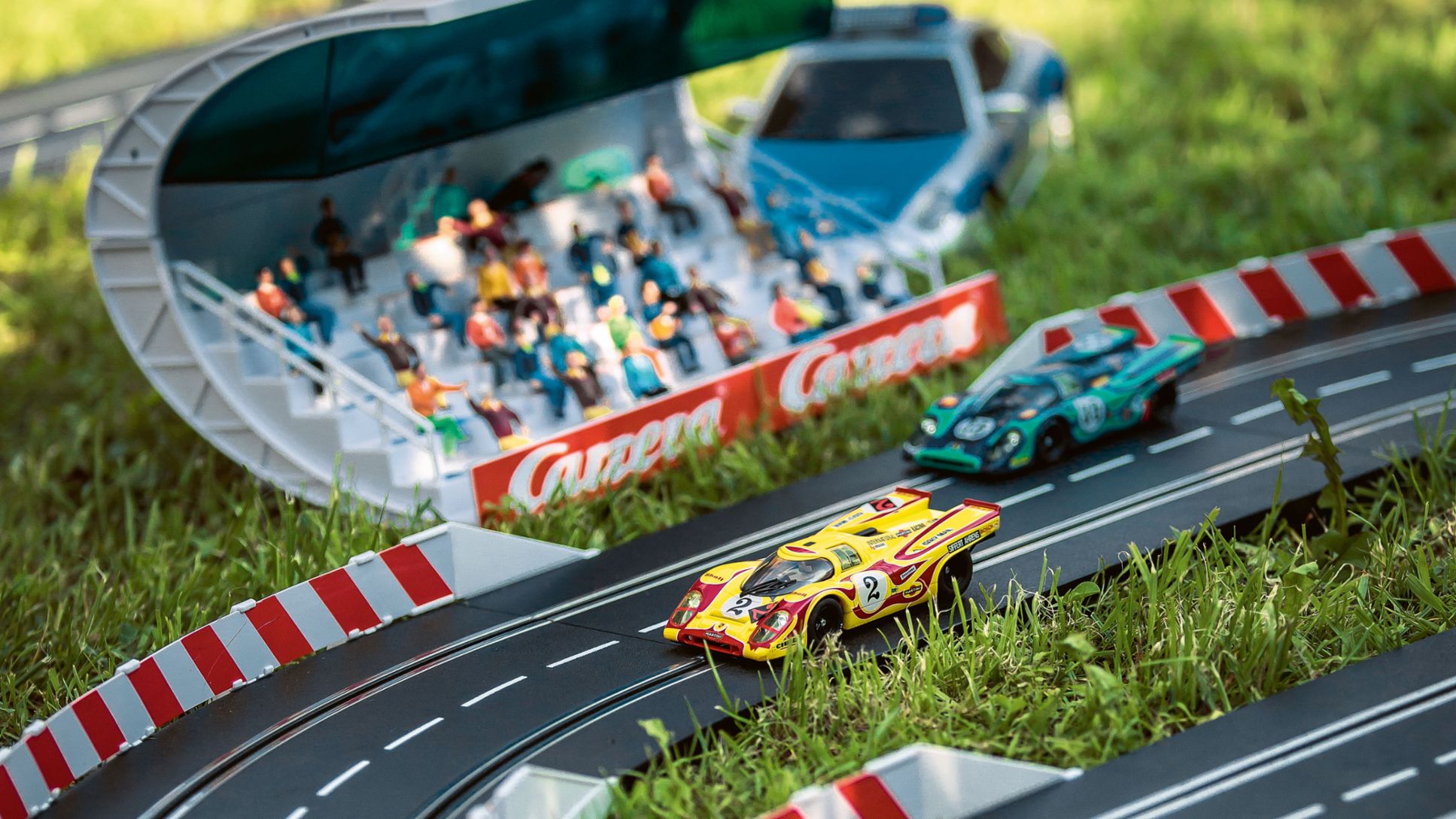 “Playing is the most enjoyable way to pass the time without having to ask what the point is,” says Andreas Stadlbauer, head of the Carrera slot-car racing brand. He gets together with friends at the lake every year. There, the men lay down meters of track and switch points. Then they go all-out with their tiny cars.

Gentle waves crinkle the surface of Lake Attersee. Dark clouds frame the panorama of the nearby Höllengebirge mountain range. A few minutes later, a rainbow spans the lake. It’s as pretty as a postcard. Andreas Stadlbauer strips off the protective film on the Carrera Control Unit, the heart of the slot-car track, for use. The rest can get wet. Stadlbauer has invited friends for a men’s day in the yard of his vacation home in Upper Austria. The only item on the day’s agenda: playing. It’s no easy task to outgun the host when he has the controller in his hand, but that doesn’t stop four friends from trying again every summer. Stadlbauer’s friendly rivals are Helmut Eggert, member of the executive board of Porsche Import (Porsche Austria), insurance broker Thomas Matzelberger, and Robert and Walter Lechner, owners of the Lechner Racing School, one of the most successful racing talent incubators in Europe. The men are united in part by friendships stretching back to the days of their youth and by a passion for motorsports on every scale, both privately and professionally.

The twenty-five-meter-long Carrera track wends its way around the yard on the shores of the lake, which is popular with sailing enthusiasts. The track layout resembles a U. It consists of lane-change straightaways and hairpin corners, long sprint sections and double switch points, where cars can overtake each other at the touch of a button. The thirty-degree banked curve encircles a fire pit that, in the dusk, will bathe the track in flickering light. On the shore of the lake, the host’s two cats, Sunny and Billy, prowl watchfully at a respectful distance.

Race one: Porsche vs. Porsche

In competition are a Porsche 904 GTS, a Porsche 918 Spyder, a Lechner Racing Porsche GT3 RSR, and two Porsche 917 K Martini Internationals. Eggert takes off his dark blue jacket and lays it over the back of a garden chair. Stadlbauer rolls up his sleeves. Matzelberger takes a deep breath and bites his lower lip. The Lechner brothers descend into a squat and examine the track, as if searching for the ideal line. Three, two, one—the Carrera start light gives the signal for the first race. Stadlbauer’s wife, Daniela, waves the flag and then goes back into the house. It’s men only.

“The 904 GTS has the best shot on this track because, without a spoiler, it weighs a bit less than the other cars. So it’s the fastest around the banked curve,” says Stadlbauer, who warmed the tires of his slot car with his hands before the start.

Together with his father Dieter, Andreas Stadlbauer bought the Carrera brand eighteen years ago. The company’s tracks and cars have been gracing many a child’s bedroom since 1963. “Through continuous technical advancement, we want to offer our customers increasingly exciting races and spectacular car models,” says Stadlbauer of the company’s goals for the future. Carrera is the Spanish word for “race” and that is precisely what Andreas Stadlbauer loves to do, preferably with his two sons. The fifty-year-old is often seen at the track at the company headquarters in Puch as well—entertaining business partners. “There’s this lovely term homo ludens, the playing human. We’re never too old to play. We just have to listen to the child within us,” says Stadlbauer. “It generally takes less than ten minutes before you have grown men taking off their ties and tossing them in the corner.”

As he says this, he hikes up his sleeves another notch with some resolve. After a quick glance at the status of the race, Stadlbauer adds more—it’s important to him: “Playing is the most enjoyable way to pass the time without having to ask what the point is.” A nice idea, finds Helmut Eggert, who in his free time likes to swim, surf, and play squash. Even so, he says, “Everyone wants to be first, even if it’s only for the sake of honor.” Then he and Matzelberger, who, among other things, puts on the Gaisberg Classic Car Race, talk about glorious feats from their kart-racing days. In the end, he comes in second place today. Yet another tale for his personal hall of fame.

The creation of a Carrera set, which consists of two brightly decked-out cars, is the work of some ten thousand steps. Stadlbauer needs just one at the moment: he steps past the fire pit and puts the Porsche 904 back in the outside lane with the guide fin. Weighing in at just under a hundred grams, the 1:32-scale cars can accelerate to over twenty kilometers per hour. It’s just like with the big cars, explains Robert Lechner: “When the rear axle loses its grip, the lap ends with a takeoff. Dexterity is important here too.” For Klara, the younger of his two daughters, he programs the car so that she can floor it without lifting off. “She basically drives a ghost car; the girls love it,” says the thirty-nine-year-old, who inherited his love of all types of cars from his father. “It was important to him that we didn’t smoke, did well in school, and played music. And he taught us to share at an early age,” adds Walter Lechner, who shares a love of motorsports, and especially endurance races, with his brother to this day. Nevertheless, he keeps the top spot on the podium as the day’s winner quite to himself, of course. Until the rematch—in a few days’ time.

Carrera is the world’s market leader in the slot-car sector and the most important brand in the Stadlbauer Group. In Germany the name Carrera is synonymous with the concept of slot-car racing. Carrera sells one million sets each year. The company produces some three million cars and seven million meters of track annually. Sixty percent of annual sales are generated during the Christmas shopping season. The cars are available in the scales 1:43, 1:32, and 1:24. Carrera fosters competition and holds an annual Carrera Challenge championship in Germany and Austria. For more information, visit: www.carrera-toys.com