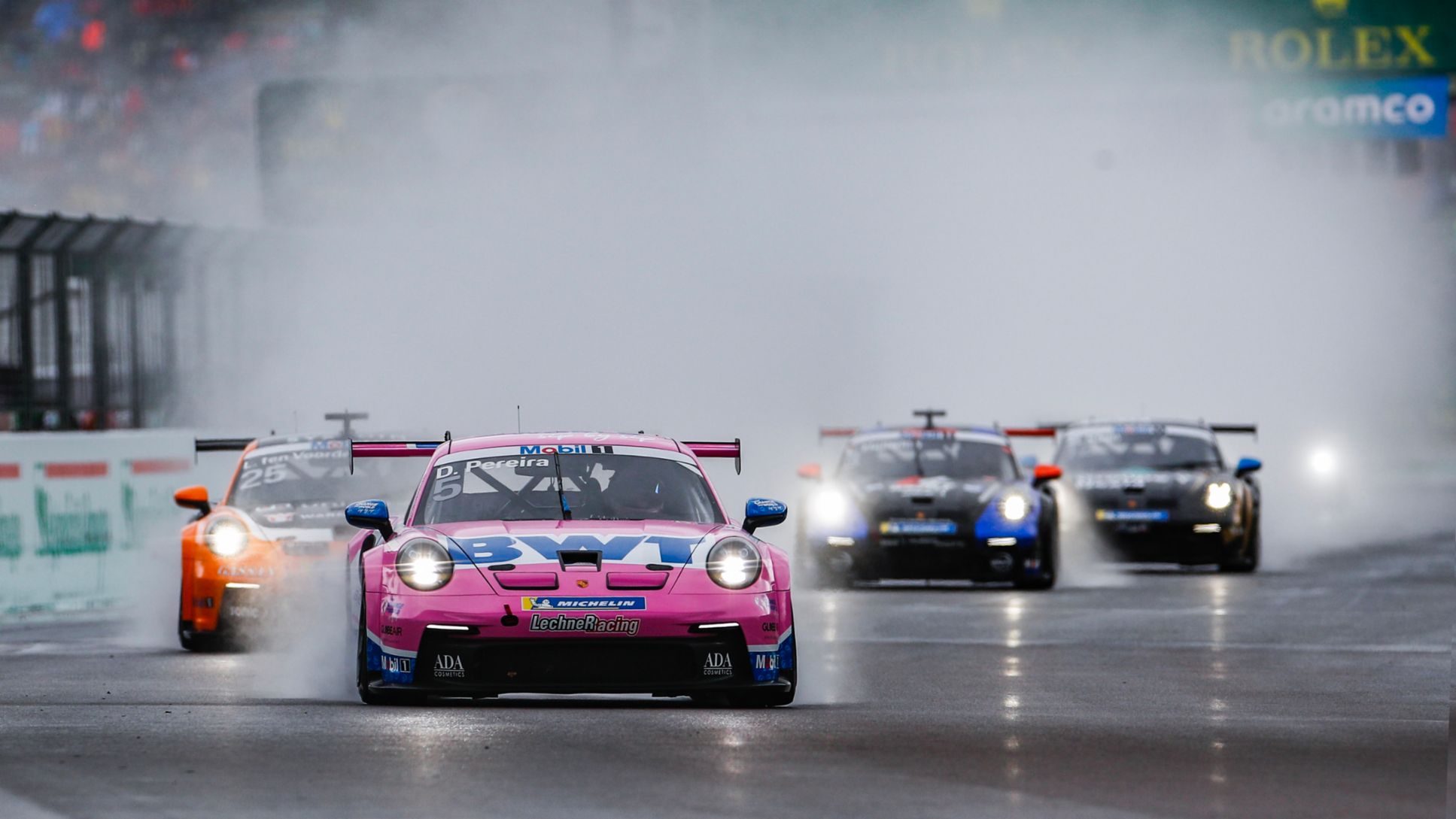 Porsche and Formula 1® have extended their collaboration for eight years, longer than ever before covered in a single contract, meaning the support series will have been on the FIA Formula One World Championship™ calendar for almost four decades. In 2023, the Porsche Mobil 1 Supercup will be part of eight European Formula 1® races.

The Porsche Mobil 1 Supercup will continue as a support series to the FIA Formula One World Championship™, as it has done each season without exception since 1993. Both partners have extended the agreement for eight years until 2030. For the 2023 season, the international one-make cup contested with the Porsche 911 GT3 Cup will be part of eight European Grand Prix™ events. The 2023 calendar includes Imola (Italy), Monte Carlo (Monaco), Spielberg (Austria), Silverstone (United Kingdom), Budapest (Hungary), Spa-Francorchamps (Belgium), Zandvoort (Netherlands) and Monza (Italy). Furthermore, the Porsche Carrera Cup Asia and the Porsche Carrera Cup Japan retain their places in the support programme of the Formula 1® races in China and Singapore or Japan until 2030.

“The Porsche Supercup has been a regular fixture on selected Formula 1 weekends since 1993. And this isn’t about to change: Both parties have agreed to an eight-years contract extension. This underlines the great level of trust that Formula 1 has put in our concept and our team, as much today as for the last 30 years,” comments Thomas Laudenbach, Vice President Porsche Motorsport.

“Formula 1 is the ideal platform for drivers and teams in the Porsche Mobil 1 Supercup to demonstrate their prowess at the highest international level. The best from Porsche’s national one-make cups come together in the Supercup. I’m also proud of the fact that the respective national Porsche Carrera Cups will continue as part of the support programme at several Formula 1 events outside Europe in the future. We will also maintain our presence in North America and even further expand our involvement,” adds Michael Dreiser, Sales Director Porsche Motorsport.

Stefano Domenicali, President and CEO, Formula 1, said: “For 30 years Porsche has been an important part of the Formula 1 weekend. I’m looking forward to continuing our long-standing relationship which delivers something special for our fans across our European season and beyond. It is yet another sign of our growth and influence as a platform that major brands want to continue to expand their relationships with us and the potential that is there for all our partners.”

For the 2023 Porsche Mobil 1 Supercup, 28 permanent spots are available for registered competitors. Depending on the capacity of the racetracks, additional guest drivers may enrol. At the majority of last season’s Supercup races, 32 Porsche 911 vehicles treated fans in the packed grandstands to some thrilling racing.

Five winners, one champion: a review of the 30th Supercup season

A three-way battle for the title defined the 2022 Porsche Mobil 1 Supercup season. Initially, Dylan Pereira took the top spot in the standings with a victory at the opening race in Imola. At times, the Luxembourg-born soldier athlete had to relinquish this position to defending champion Larry ten Voorde (Team GP Elite) from the Netherlands. It was not until the season finale in Monza that the BWT Lechner Racing driver finally triumphed over ten Voorde and Porsche Junior Laurin Heinrich (SSR Huber Racing) from Germany. Pereira celebrated three victories throughout the season, with ten Voorde, Heinrich and as well Marvin Klein (CLRT) each climbing to the top step of the podium once.

Supercup rookie Bastian Buus set two records over the course of the season. Driving for the BWT Lechner Racing team, the Dane won the rookie classification in all eight races and, on two occasions, even led the entire field at the wheel of his Porsche 911 GT3 Cup. Claiming first place at the Supercup race in Le Castellet, France, he also made his mark as the youngest winner in Supercup history: Buus was 19 years, one month and five days old. He wrapped up the year in fourth place overall.

The strong performances from Buus and Pereira also set the foundation for BWT Lechner Racing’s title win in the team classification. The seasoned team from Austria secured this prestigious award for the eleventh time. Norwegian Roar Lindland (Pierre Martinet by Alméras) took home the ProAm trophy for the fourth time.

A total of 53 drivers from 19 countries lined up on the eight grids in the 2022 season. Five-time motorcycle world champion Jorge Lorenzo joined as a guest driver: the Spaniard drove the VIP 911 at the season-opener in Imola. In addition, Supercup races were contested at the Formula 1® races in Monaco, France, Austria, Belgium, the United Kingdom and the Netherlands, with Monza in Italy once again hosting the finale. The highest average speed over the year was set by the champion Dylan Pereira at just under 175 km/h. The fastest race lap was turned by his teammate Harry King at Monza, with the Briton clocking an average speed of over 190 km/h.

Like last year, the Porsche 911 GT3 Cup cars ran on Esso Renewable Racing Fuel, a bio-based fuel blend from renewable sources. The output of the six-cylinder boxer engines with a displacement of roughly four litres remained unchanged at 375 kW (510 PS). In addition to the technically identical race cars, the control racing tyres from Michelin also guaranteed a level playing field for all and gripping race action.

All racetracks reported jam-packed grandstands, with the FORMULA 1 LENOVO BRITISH GRAND PRIX 2022 as the season highlight: Official figures show 401,000 spectators in the grandstands at Silverstone over the entire weekend. Supercup fans were also able to follow the action on-screen. More than two dozen TV stations televised the eight races live or as a recorded programme in over 100 countries in Europe, North and South America, Asia, Australia and Africa. Additional live images and information were provided by the official Formula 1® internet channel. In addition, the Porsche Motorsport Hub provided fans with live timing of practice sessions, qualifying and races.

“The 30th season turned out to be one of the most exciting in the history of the Supercup: Five winners in eight races speak volumes for the high performance level among the drivers,” comments Oliver Schwab, Project Manager Porsche Mobil 1 Supercup. “What’s more, with this being the second year running the 992-generation Porsche 911 GT3 Cup, the differences between the individual teams shrunk even more. This means that the Supercup, which runs as part of the Formula 1 events, has once again impressively underlined its position as the flagship of all Porsche national one-make cups. For this, I would like to thank the squads, the drivers, our partners and my entire team.”

The 2022 Porsche Mobil 1 Supercup in numbers

401,000 spectators were counted by the British Grand Prix organisers over the event’s weekend – a record in a season packed with sold-out races.

190.289 km/h marked the average speed for the fastest race lap of the season set by UK racer Harry King (BWT Lechner Racing) in Monza. Since this race was interrupted by a safety car phase, this was not the fastest race overall.

32 Porsche 911 GT3 Cup racing cars lined up on the grid at most Supercup races.

21 drivers within a second in qualifying: That’s how competitive it was at the Red Bull Ring in Spielberg as part of the Austrian Grand Prix weekend.

19 countries from where the drivers hailed in the 2022 season. Most were from the Netherlands with twelve permanent competitors plus guest drivers. Porsche Junior Laurin Heinrich, the four-time Supercup champion Michael Ammermüller and Sebastian Freymuth (all SSR Huber Racing) came from Germany. Also represented: Australia, Austria, Belgium, Brazil, Denmark, Finland, France, Italy, Luxembourg, New Zealand, Norway, Sweden, Switzerland, Spain, the United Kingdom and the USA. Moreover, an Israeli driver competed for the first time in the 30-year history of the Supercup.

0.370 seconds was the gap between winner Bastian Buus and Harry King at the Supercup race in Monza – no other race was closer in 2022.