Really, there’s no such thing as having petrol in the veins or ‘Porsche DNA’ – but some people are so closely linked to a brand that one might wonder. Take the Lieb family: where the father takes care of the servicing while the son wins at Le Mans.

Weissach is first mentioned in official records in the year 1100 and again in 1254 – but the municipality only became famous in the 20th century when Porsche built a test track there. Today, the site serves as the development, design and test centre for production and racing cars and accommodates 4,000 employees.

Pfaffenhausen in Lower Allgäu is even older. The town can be traced right back to the eighth century. A quiet and tranquil place, with a lot of agriculture and some manufacturing, it is also Porsche country. Or, to be more precise, RUF country, because it was here that Alois Ruf senior opened a filling station and workshop in 1939. A BMW dealership was added in the mid 1950s, just at the time when BMW was hovering between the Isetta and large eight-cylinder cars. Ruf’s son, also named Alois, fell in love with the Porsche brand as a young boy and since 1981 he has produced modified versions of the cars under his own name, selling them all over the world. However, far fewer employees work for him on construction, maintenance and restoration of the Porsche vehicles. The country roads and nearby motorway act as his test track – as do race circuits all over the world.

Hans-Peter Lieb works as a workshop foreman for Alois Ruf here in the Allgäu region. “I too am dyed-in-the wool Porsche,” he says. “I started at Porsche as an apprentice. I first worked in the workshop in Werk 1, and then in the road testing department, before going to technical college to qualify as a master mechanic. But Porsche then had a hiring freeze, which meant that I accepted an offer from Uwe Gemballa and worked on the high-end tuner’s vehicles for two years. Many of his vehicles were based on Porsche cars, and their modified engines were supplied by Alois Ruf.”

In 1988, this contact led to an offer from Ruf, who was looking for an experienced master mechanic. As a result, the family moved to Pfaffenhausen with their then eight-year-old son, Marc. Here, the boy became increasingly fascinated by cars, having sat in a kart for the first time at the age of five: “I started driving a car for the first time in the workshop yard – and I sat behind the wheel of a Porsche for the first time here after many trips in the passenger seat,” says Lieb junior.

The family always had a great interest in motorsport. Lieb senior also dreamt of becoming a racing driver, “but the money was never there for that. And who knows whether I would have been really fast?” he says. It was therefore a happy coincidence that his son was interested in motorsport. “He was always very quick, and we enjoyed quite a lot of success in karting,” remembers the proud father. In 1994, then aged 14, Marc finished second in the ADAC Junior Kart Championship, and “we thought then about whether and where we wanted to race, because money was still tight”. The decision to race in Renault Formula 1800 was made in 1996. After finishing second in the championship in 1997, he made the leap to Renault Formula 2000 in 1998.

"We had actually finished with motorsport - but then came the Porsche Junior Sighting. Marc raced in the Carrera Cup and won the championship two years later." Hans-Peter Lieb

“In 1999 we had really given up on motorsport – we had spent the money expected from our pensions and life insurance policies. We would have liked to take part in Formula Three, but we no longer had the funds. The traffic light was on red,” remembers Hans-Peter, adding that A-levels had to come first. By this time the family had moved to Leonberg, where he was employed as workshop manager by Thomas Behringer, boss of the Techart company founded in 1987. Behringer promised that he could take care of his teenage son’s racing career, inviting him to drive at the track each Thursday evening and to look after the racing car, as well as organising sponsors.

By 1999 word about Marc’s skill on the track was getting round and Porsche invited the 19-year-old to take part in the junior driver selection process. He was spotted by Burkhard Bechtel, who had worked as the track announcer and a TV commentator in the Porsche Carrera Cup since 1992. “I had seen how fast Marc Lieb was in Formula Renault even with inferior material,” recalls Bechtel, who persuaded Porsche to take the young racer on. Marc went on to drive in the Porsche Carrera Cup for three years, became Champion in 2002 and then received a contract as a Porsche works driver.

“Studying and racing at the same time? Both with success? I still wonder today how Marc managed that.” Hans-Peter Lieb

It was at this time that Porsche started development of a new racing car: the RS Spyder. Built from 2005 to 2008, it would achieve numerous victories and titles. Porsche offered the younger Lieb the chance to participate in development of the car. “It was an offer that probably everyone would have taken,” says his father but, to his surprise, Marc turned the invite down and instead signed up to study automotive engineering at the Esslingen University of Applied Sciences – with the support of Porsche. He successfully graduated as an engineer with a thesis on the subject of differential locks. The fact that he still drove races at the highest level during these years, winning many victories and titles, makes his career even more impressive. Studying and racing at the same time? Both with success? “I still wonder today how Marc managed that,” smiles his father.

With no further study obligations, Lieb junior participated in development of the 911 GT3 R Hybrid and the 918 Spyder, in which he completed a lap of the Nürburgring Nordschleife in a time of 6:57 minutes in 2013. It is a drive that everyone should take the time to watch on YouTube. However, the highlight of his career would be the 2016 Le Mans victory with the Porsche 919 Hybrid after 11 attempts. It was with this highlight that Marc Lieb ended his career. “I have a family and a fantastic job at Porsche as Head of Motorsport Sales North Europe, and I’m occasionally allowed to drive the company’s new and historic racing cars,” he says. And his father? “I take care of Alois Ruf’s wonderful cars and am delighted at how well Marc has found his way through life.”

Works driver Simona De Silvestro: at home on the road

The fastest woman at Porsche Motorsport finds tranquility on a camping trip in her Cayenne Turbo Coupé. 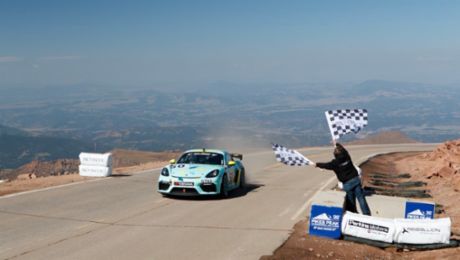