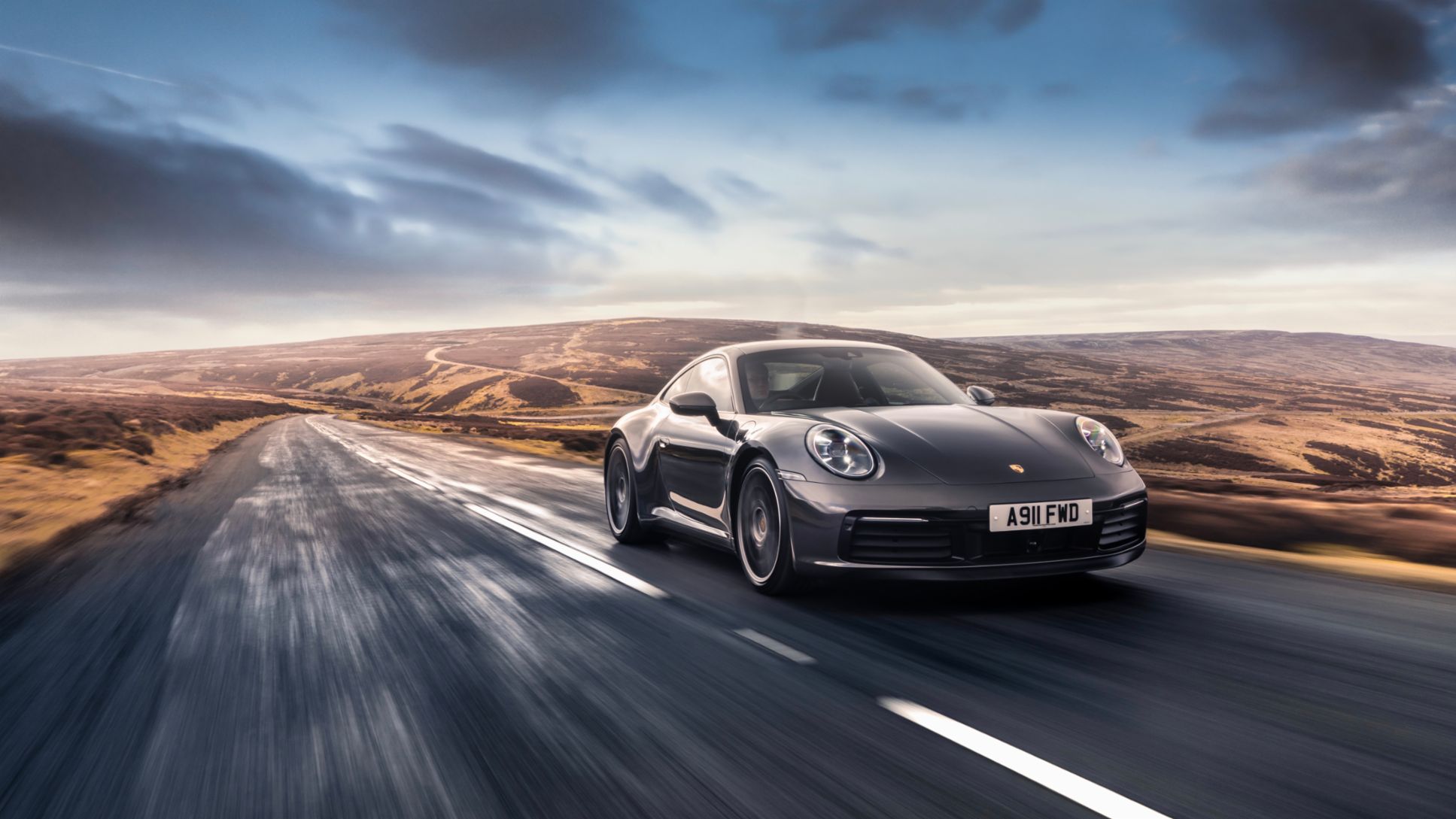 Five modes in one day – with the Porsche 911

Exploring the versatility of the Porsche 911 with a road trip designed around its dynamic driving modes.

On the United Kingdom’s northbound M6 motorway, the mode switch points to 10 o’clock. Illuminated red lettering on the right-hand digital display reads ‘Normal’. The sun is still creeping up over a cloudy eastern horizon and early morning commuters pepper the carriageway with slow-moving traffic.

Normal mode is the perfect set up for relaxed cruising

Normal is the default driving mode for all new 911 – the perfect set up for this sort of relaxed cruising. The throttle response is a little slower and automatic upshifts from the twin-clutch PDK gearbox happen a little earlier in the rev range. The suspension is also in its softest setting to maximise ride comfort, and the sports exhaust valves are closed to minimise engine noise. Like no other sports car, the 911 embraces the role of grand tourer with consummate ease. And quite literally with the flick of a switch. Sit back, relax and let the car do the work.

But the day will not always be so undemanding. The first destination on a complex 24-hour itinerary is the sleepy hamlet of Seathwaite, Cumbria. This tiny community in the Lake District is officially recognised as the wettest inhabited place in the British Isles, receiving on average 3,552 millimetres of rain every year. The perfect place, therefore, to put the 911’s recently launched Wet mode through its paces.

First seen in 2019 as standard fitment on the all-new 992 generation 911, Wet mode was developed to provide intelligent, pro-active support in the worst of driving conditions. Using acoustic sensors in the front wheel housing to detect spray, Wet mode warns the driver about the risk of aquaplaning. If the system detects a wet road surface, the response behaviour of the Porsche Stability Management (PSM) and Porsche Traction Management (PTM) systems is preconditioned so that both systems intervene earlier and more sensitively. Wet mode also alters the adaptive aerodynamics and optional Porsche Torque Vectoring (PTV) Plus to guarantee maximum driving stability.

Heavy clouds blowing west over the Irish Sea have indeed left the final few kilometres into Seathwaite damp at best and in places treacherously slippery. One click counter-clockwise on the mode switch and the Carrera 4S is fully focussed and even more sure-footed. Wet mode in all-wheel-drive models also transfers more power to the front axle, increasing stability, while a flatter torque curve brings the power in more gently under a softened throttle. After a few more minutes of cautious driving through the Borrowdale valley, the 911 comes safely to a halt in the quiet surroundings of Seathwaite itself, its terraced farming cottages and ancient drystone walls a picturesque contrast to this most modern means of transport.

Heading back inland, the sun breaks through the clouds for the first time in the day, illuminating the vivid palette of greens and blues that make up England’s Lake District: a National Park region that is famously beautiful and infamously wet. The route out of Seathwaite takes in Wrynose Pass, a long, narrow and challenging mountain road that connects the Duddon Valley and Little Langdale. It winds east, eventually passing Windermere, home to countless pre- and post-war water speed records, and on across the northernmost tip of the Yorkshire Dales towards the Pennine mountains.

Sport mode brings the 911 to life

Here, the road widens, and with the asphalt now dry and the way ahead clear, it’s the ideal moment to turn the mode switch clockwise to 12 o’clock and ‘Sport’. With a satisfying bark from the exhaust and a raise in the pitch of the engine, Sport mode seems to bring the 911 to life. Throttle response is sharper and shifts from the 8-speed PDK transmission are noticeably quicker. The suspension stiffens to minimise body roll, dynamic engine mounts engage to enhance handling balance still further and those closed valves in the sports exhaust open up at last, allowing the boxer’s sonorous flat-six (911 Carrera 4S: Fuel consumption* combined (WLTP) 11.1 – 10.2 l/100 km, CO₂ emissions* combined (WLTP) 253 – 231 g/km, Fuel consumption* combined (NEDC) 10.1 – 9.7 l/100 km, CO₂ emissions* combined (NEDC) 231 – 222 g/km) to echo off the high hillsides.

The next stop on the schedule lies several kilometres further east, just south of the historic railway town of Darlington. The three-kilometre Croft Circuit was first used for motorsport back in the 1920s and today forms a popular part of the British Touring Cars calendar and hosts a round of the Porsche Carrera Cup GB.

Its two short, parallel straights, connected by a series of fast righthand bends and a 180-degree hairpin, are the perfect challenge for the fourth mode in the 911’s repertoire, Sport +.

Ideally suited to circuit driving, Sport + is designed to maximise performance from the 992’s chassis and drivetrain, with instantaneous throttle responses, lightning fast shifts and markedly sharper steering and stiffened suspension. And on the empty circuit, Porsche’s rich racing lineage is immediately evident, the Carrera 4S revelling in that unique mix of traction, balance and steering precision to hunt out every apex before powering on to the next. The immediacy of the controls in Sport +, the physical and emotional connection between car and driver, underlines the fact that for all its touring potential, the 911 remains at its heart a true sports car.

Individual mode combines the favourite elements for a bespoke set-up

The car cools with characteristics ticks and tinkles in Croft’s empty paddock as the sun begins to set. But there is still one driving mode left to try. After sampling everything the 992 has to offer, Individual mode allows the driver to cherry pick their favourite elements for a bespoke set-up, tailored to a certain favourite road or regular journey. And after a long day at the wheel today, the route home is another tantalising series of fast, winding A-roads, chasing the sun back towards the west coast before the motorway takes over once again for the final leg south.

The combination of Normal mode’s more supple suspension with Sport’s sharper shifts and faster throttle response offers the best of both worlds, configuring the car to the conditions of the road and the mood of the driver. Five modes in one day, each perfectly adapted to the moment.