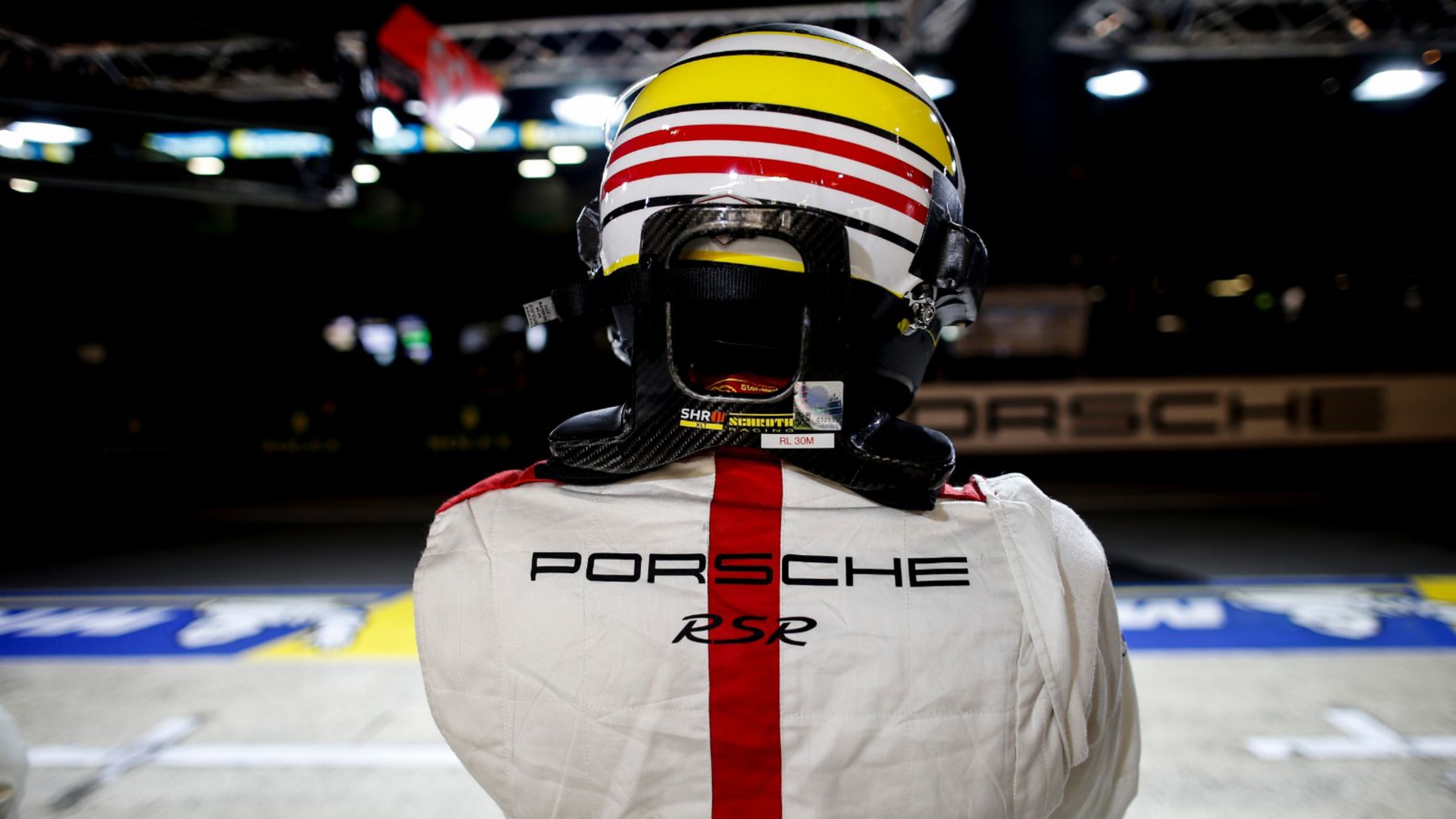 The mandala drawn by a little sister, a lion's mane in the wind, the pride in a nation or a star to symbolise the FIA WEC title – the helmet designs of the Porsche works drivers all have an individual touch.

The 2021 season of the FIA World Endurance Championship (WEC) officially started with the prologue at Spa-Francorchamps in Belgium. This year, the Porsche works team competes with a slightly different line-up: Gianmaria Bruni from Italy and Austrian Richard Lietz share the cockpit of the No. 91 Porsche 911 RSR, as in previous years but the Frenchman Kévin Estre is now joined in the No. 92 sister car by Neel Jani from Switzerland. The 2016 outright Le Mans winner not only brings a wealth of experience to the driver crew in the FIA WEC, Jani also lets the sun shine during his campaigns. The reason: the helmet of the 37-year-old features a special design.

Neel Jani: it all began with a mandala drawn by his sister

“I’m not one of those people who keep changing their helmet designs,” says Jani, explaining the story behind the distinctive colouring of his protective headgear. “The design was created in the year 2000. My sister Reena, who was 13 years old at that time, often painted mandalas. One of them was of the sun, which can now be seen on top of my helmet. I still think it’s a great element, and in a way, it pays tribute to our Indian roots on my father’s side.” Jani and his now 34-year-old sister have an Indian father and a Swiss mother. “The first version of my helmet was more or less created in our playroom. Reena used to paint on white stickers and I then stuck them on my helmet,” smiles the newcomer to Porsche’s GTE-Pro works team.

“That’s why there are still some white strips on my helmet today. At that time, we couldn’t put stickers over the entire surface. But I think it’s great: the white combined with the bright red gives the design a slightly lighter look – Feng Shui in motor racing, so to speak,” says Jani. “Red Bull has been my partner since 2004, so that’s why the sides of my helmet are finished in their colours.” The design on the front resembles pouting lips; the back shows almost the opposite: “It’s an evil-looking smiley face,” explains the family man. “Perhaps my sister wasn’t in such a great mood with me when she drew this 20 years ago. It’s definitely not an indication of my ruthless competitive spirit or an ominous warning to the competition. That’s not my style.”

A lot of yellow and black, a little white and red – Richard Leitz’s helmet has a classic style. From above, rings of different widths can be seen in corresponding colour patterns. “I’m not a fan of overly aggressive designs,” says the architecture and design fan. “The latest concept, which differs only slightly from my previous one, comes from the Italian studio CF Design. I heard about this company through my teammate Gimmi. I like their work. It suits my personality and my wishes regarding my racing gear.”

The red and white stripes in the lower area of the helmet represent another classic element – a clear nod to the origins of the 37-year-old Porsche works driver. “I’m Austrian and I’m proud of it,” says Lietz, who is from Ybbsitz in Lower Austria. He sees his devotion to his homeland not as nationalism but instead as something that distinguishes him from others: “I’m Austrian – there are not too many of us! And there’s nothing more to it than that.”

With its clean lines, Kévin Estre’s protective headgear seems almost plain. The basic design of the Frenchman’s helmet has not changed since 2008, only new colour accents have been added. “I always match the colour scheme to the vehicle design. When we drove the Pink Pig at Le Mans in 2018, my helmet reflected that. When I’m driving the Porsche 911 GT3 R for Manthey-Racing, I adapt the colours to the ‘Grello’ green and yellow,” the Frenchman explains. For the 2021 season, the Le Mans class winner of 2018 has rearranged the usual WEC helmet colours: a large swathe of matte black replaces the white, with the black and white areas now outlined in bright orange.

“This orange has a special meaning for me. As a teenager, I really liked Kimi Räikkönen’s helmet design. It was such a vibrant orange, so I adopted it. I took the design on the back, which resembles a flag fluttering in the wind, from a competitor in kart racing. I just thought it looked cool,” says Estre. Compared to his colleagues, the 32-year-old Frenchman allows very little room for personal messages and mottos. The French flag flies on both sides of the helmet in a tiny circle measuring about one centimetre across. The back of the helmet features a small gold star. “It’s like the national football teams,” Estre smiles, adding with a laugh: “A star for every world championship. I won the FIA WEC title in 2018/2019. As you can see, there is still enough space for more.”

Gianmaria Bruni: the king of the jungle strikes like lightning

There is no doubt that Gianmaria Bruni’s heart beats for Italy. The ex-Formula One driver’s helmet is predominantly green, white and red. “Since switching to GT racing, it’s become more and more prominent,” says the Monaco resident. “It was important to me to mark the move into GT racing with a change of helmet design.” Bruni, who set an outstanding lap record for GT cars during the qualifying for the 24 Hours of Le Mans in 2018, shows a lot of bite in the Porsche 911 RSR. “The lion’s mane fits perfectly on my helmet,” explains the 39-year-old.

At first glance, the lion’s mane looks more like flames of gold and black. “It’s supposed to be like that,” he laughs. “The lion strikes like lightning. Joking aside, the lion’s mane in the wind simply represents the dynamics of motor racing. I really like it. But there’s another tiny detail that’s even more meaningful to me – on top of my helmet is a small star. That’s for my precious daughter. Her name is Stella – and in this way, I always carry this particularly bright star with me through life.”

Porsche has secured the support of two endurance aces for the races in Portimão and Le Mans.