Porsche kicked off the decisive final fortnight of the FIA World Endurance Championship in Bahrain with a one-two result at the six-hour race. Just seven days after their strong performance, the two 911 RSR will have to withstand the next challenge.

Kévin Estre (France) and Neel Jani (Switzerland) managed to narrowly beat their works driver colleagues Gianmaria Bruni from Italy and Austrian Richard Lietz last Saturday in the GTE-Pro class. This Saturday (6 November), the final eight-hour race of the FIA World Endurance Championship (WEC) will be contested at the Bahrain International Circuit. At the sixth and final race of the season, Porsche will fight for the manufacturers’ and drivers’ championship titles. To achieve this goal, the two 911 racers must be perfectly prepared.

On Sunday morning at 09:30, the garage doors of the Porsche GT Team open. Inside the pit workshop stand two 911 RSR cars, bearing unmistakeable traces from the previous day’s gruelling race. The body is covered with black streaks left by pieces of flying rubber. On the left side of the No. 92 car, a red stripe signalises a close encounter with another vehicle. At 10:00, after a quick team briefing, the Manthey operations team begin restoration work on the two cars. “The dismantling of the body, suspension and entire powertrain takes about 40 minutes. All that’s left on the car is the fuel tank, the electronics and all the interior components,” explains Tobias Hansonis, the Porsche GT Team crew chief. “All parts are cleaned and inspected visually.”

If any obvious damage is discovered during this process, the specialists are called in. At the very back of the pit garage, Ulrich Pashaus waits at two large work tables. “Should defects crop up, we have to decide whether we should completely replace the part or repair it,” explains the expert in composite components. The incumbent Carnival Prince of Aegidienberg, a district of Germany’s Bad Honnef, adds: “We have carbon material with us at the track. I mix the resin and laminate new layers onto the damaged component. The hardening of the new carbon layer takes almost no time in Bahrain’s climate. If I use a hairdryer or put the components in the oven, the desired hardness is achieved after just two hours.” From his workplace, Pashaus makes sure that the two Porsche 911 RSR cars are back on their wheels in meticulous condition for the final race of the season.

A few metres away stands Kevin Panter. He is responsible for replacement components. “We have about 5,000 different spare parts with us,” he says, as he glances at the vast array of well-sorted assembly units that can be fitted as complete kits into the ca. 515 PS 911 in a very short time. The entire collection was transported to Bahrain in six large containers. Most of the spare parts come in duplicate; others are available in larger numbers. “We see the most wear and tear in the area of the skid plates under the front of the car. Often we have to replace these after just one practice session. Kerb hopping or even hard bumps leave distinct scuff marks,” says Panter. Originally the skid plates were made of wood, however the current version is made of a two-component material. Still, wear and tear is inevitable.

Meanwhile, in the garage, the vehicles have been stripped down: all bodywork parts are removed and neatly arranged in the sun in front of the pits. Two mechanics lie under the No. 91 car and loosen screws. Shortly afterwards, two others lift the body onto a stable frame using an air jack system. The entire power train remains on a mobile forklift and is pulled in one piece from underneath the car. A little later, two specialists separate the engine from the clutch and gearbox. The individual assemblies are then meticulously checked for damage and wear.

“Our components are designed to last for 30 hours of running. After that, we generally carry out a service. The gearshift unit gets an overhaul after 60 hours,” reports gearbox specialist Tobi Böller, who climbed the podium on behalf of the team at the winners’ ceremony last Saturday. “After a six-hour race, there shouldn’t be any defects, but we still check everything thoroughly. Something may have arisen here and there that needs fixing.”

It’s noisy next to the transmission department. The constant pounding sounds like a steamship on a long voyage: Juan Verpoorten has his test bench for shock absorbers running. “When my department receives the shock absorbers after a race, they’re usually completely black,” he states. The suspension components are covered with rubber debris – or what is known as ‘pickup’. “I clean the shocks and dismantle them into their individual parts. If I see no damage, I reassemble them. Then the shock absorbers are put on the test bench, which we always have with us. This shows us whether the characteristics are still perfect. If not, we of course exchange the element. We bring three sets of shock absorbers for each car in our cargo. And we packed an additional set for the back-to-back weekends in Bahrain.” The shock absorbers in the Porsche 911 RSR undergo a complete service after 30 hours of operation, and after 90 working hours, they have reached the end of their life.

“We already know before the actual races, which parts will be at the end of their running time after the event and will need replacing. We’re always prepared for this,” explains crew chief Tobias Hansonis. Based on these run-time lists, the mechanics work through a comprehensive programme for the maintenance of the car. Five specialists are responsible for each racer, and another mechanic is on hand for other jobs. “If we have a race like last Saturday that goes without any major incidents or shunts, then overhauling the vehicles is over in no time. Obviously, we’re always pleased when that happens,” smiles Hansonis. The plan for Bahrain: by Tuesday, the two Porsche 911 RSR should stand like new in the pit lane garage. Work then begins on the setup before the cars head back out on the racetrack on Thursday for the first free practice session. 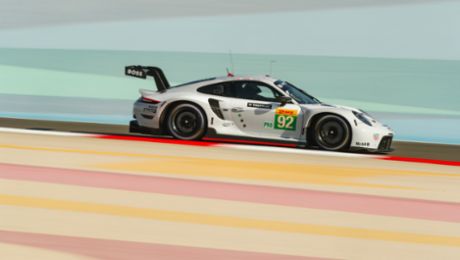 The Porsche GT Team finished the last race of the FIA World Endurance Championship in positions two and four. 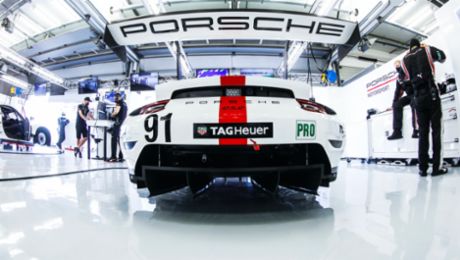 The first-ever doubleheader event in the history of the WEC poses some special challenges for the Porsche works team.