Acclaimed American artist Richard Phillips and Porsche have collaborated to create an exceptional work of art of Porsche’s first all-electric sports car, the Taycan. In December of last year, the Taycan Artcar was created live at the Leuehof pop-up restaurant on Zurich’s Bahnhofstrasse. With the support of RM Sotheby’s, the single and unique piece will be auctioned globally from April 6 to 13, 2021. All proceeds will be donated to Switzerland’s non-profit association Suisseculture Sociale. Porsche and its project partners thereby seek to support artists in Switzerland who have been hit especially hard by the COVID-19 pandemic.

“Porsche’s first purely electric sports car, the Taycan, represents a new chapter in the company’s history,” says Michael Glinski, CEO of Porsche Schweiz AG. “We wanted to capture this achievement by working together with a leading artist. The result is this creation, which reflects the guiding principles of sustainability and electromobility and of course also places a strong focus on nature in Switzerland. By auctioning the work and donating the proceeds we want to help the Swiss cultural landscape, which has been hit especially hard by the pandemic. Porsche has set a confident course through this crisis and we are eager to give something back to the community.”

The Leuehof restaurant from Nenad Mlinarevic and Valentin Diem, where the mobile artwork was created and exhibited, has been severely affected by the pandemic as well. As a partner of the restaurant, Porsche displayed the Artcar in their culinary art space. As a result of the measures adopted to contain the coronavirus, Leuehof had to close last December and will not be able to reopen, due to the regulations that remain in force. For this reason, the Taycan Artcar will on display in different Porsche Centres in Switzerland: from March 1 at the Porsche Centre Geneva, from March 22 at the Porsche Centre Zurich. After the auction, it will be on display at the Porsche Centre Zug and will be handed over to the highest bidder.

The artist and his artwork

The Taycan Artcar is actually the second round of collaboration between the New York-based artist Richard Phillips and the German sports-car maker. In 2019, Phillips worked with Porsche factory driver Jörg Bergmeister to design a Porsche art car, which then made history at the twenty-four-hour race in Le Mans. When the Porsche 911 RSR from Project 1 Motorsport crossed the finish line to win the GTE Am class, it was the first art car ever to take the laurels in what may well be the world’s toughest automotive endurance race.

To create the Taycan Artcar, Richard Phillips applied his large-scale painting from 2010 entitled Queen of the Night – inspired by the work of legendary Swiss landscape artist Adolf Dietrich – to the body of a Porsche Taycan 4S. The work shows a three-dimensional arrangement of elements and details of the eight-square-meter painting flowing organically up the front hood over the front fenders and across the doors, giving a feeling of speed with the leaves of the night bloom.

Moving toward the rear of the Taycan, the painted image glides over the roof and rear fenders as the flora opens to reveal the blue sky and attendant butterflies. “The Queen of the Night livery culminates at the rear of the car with its namesake blossom wrapping completely around the bumper while being dramatically lit up by the Taycan’s signature horizontal light bar,” as Phillips explains. “Conceptually, my Queen of the Night livery takes into consideration that the design of the Taycan is an instant icon of electric mobility and speed.

Its lines and form are that of the artists and designers at Porsche who strove to communicate this feeling at first sight. I greatly respect this objective. The choice to work with my Dietrich-inspired painting was to reference the natural environment with its beauty and composition reimagined in concert with the sweeping gestures of the Taycan. Dietrich’s intimate relationship to the landscape was more than mere representation of the environment around him. It was to communicate the soul of Switzerland and Lake Constance. His art is universally recognized for this, and is something that I have been deeply moved by.”

Distinguished art critic and author Gianni Jetzer, curator-at-large at the Hirshhorn Museum and Sculpture Garden in Washington, D.C., describes the Taycan Artcar as follows: “The breathtaking blue tones of the sky and Lake Constance frame the elaborate composition of succulent plants. This creates an image of serenity and purity that resonates with the emission-free sports car. In contrast to the Italian Futurists of over a century ago, who, fascinated by the roar of gasoline engines brought images of speed, smoke, and furor to life, Phillips imagines an even faster vision of twenty-first-century electrified sports mobility. Inspired by nature, it reflects and integrates the landscapes it passes through while also being environmentally sustainable.”

As was the case in 2019 with the 911 RSR in Le Mans, the German SIGNal Design company was responsible for transferring the painting to the Taycan. Incorporating Phillips’s ideas as well as new perspectives and angles, the full-size work was printed on vinyl and applied to the car with heat guns.

“It’s always a great honor for us to work on creative projects with Richard Phillips – he’s an icon,” said SIGNal Design CEO Markus Schaeffler. “We got to know his extremely down-to-earth nature and have been on friendly terms ever since. I’m very pleased about that.”

RM Sotheby’s will auction the Taycan Artcar. The online auction will start on April 6, 2021, and run for seven days until April 13 on: www.rmsothebys.com. The lot includes an exclusive individually tailored tour of Stuttgart-Zuffenhausen – the birthplace of the Porsche Taycan – with Porsche AG’s head of the Taycan model range. The Artcar itself is fitted with added, exceptional customized touches from the Porsche Exclusive Manufaktur: the illuminated door sill panels are inscribed “Queen of the Night” and door projectors illuminate Phillips’ signature onto the underfloor when the door is opened.

All of the project partners, including artist Richard Phillips, RM Sotheby’s, and the Weiss Falk gallery in Basel, are forgoing a fee or commission to benefit the cause. Porsche Schweiz AG is contributing the Porsche Taycan 4S as well as all related costs to the auction. The entire proceeds will go to the Suisseculture Sociale association.

In addition to financial support, Porsche also expects the project to draw attention to the association’s work. In the words of Nicole Pfister Fetz, President of Suisseculture Sociale: “We are grateful for Porsche’s commitment to culture in Switzerland and are obviously hoping for a successful result from the auction. Every centime will benefit Swiss creative artists who are in a plight due to the pandemic and have ‘fallen through the cracks.’”

The Suisseculture Sociale association supports all full-time professional cultural creatives, regardless of their type of art, who live in Switzerland or hold Swiss citizenship. Founded twenty years ago to support creative artists, it is independent of the public sector. During the COVID-19 pandemic, the Swiss Confederation has entrusted the association with the organization of COVID-related emergency aid. The proceeds from the Taycan Artcar auction are intended for hardship cases who are not otherwise eligible for these assistance measures.

Launched in 2019 as the brand’s first all-electric sports car, the Porsche Taycan is a unique combination of typical Porsche performance, connectivity, and all-around everyday practicality. The Taycan 4S is available with two battery sizes and delivers up to 420 kW (571 PS; Electric power consumption* combined (WLTP) 24,1 – 20,4 kWh/100 km, CO₂ emissions* combined (WLTP) 0 g/km, Electric range* combined (WLTP) 430 – 512 km, Electric range* in town (WLTP) 522 – 611 km) with the Performance Battery Plus. Last year, the four-door sports sedan, with a total of twenty-seven innovations, was named the most important innovation driver on the global automotive market: at the World Car of the Year Awards 2020, the Taycan took top honors in the World Performance Car and World Luxury Car categories.

The acclaimed American hyperrealist artist was born in Massachusetts and lives in New York City. Phillips’ artworks were on display worldwide, for example in the  Museum of Modern Art in New York and the Tate Gallery in London. Phillips first encountered Adolf Dietrich’s art at the restaurant Kronenhalle in Zurich. 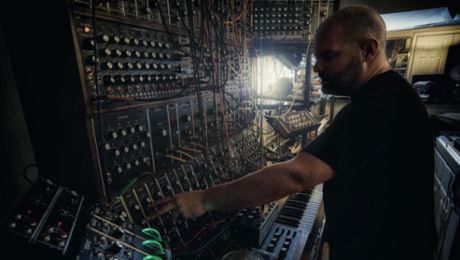 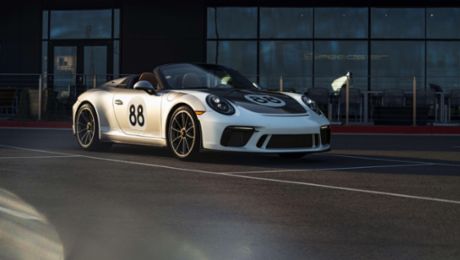