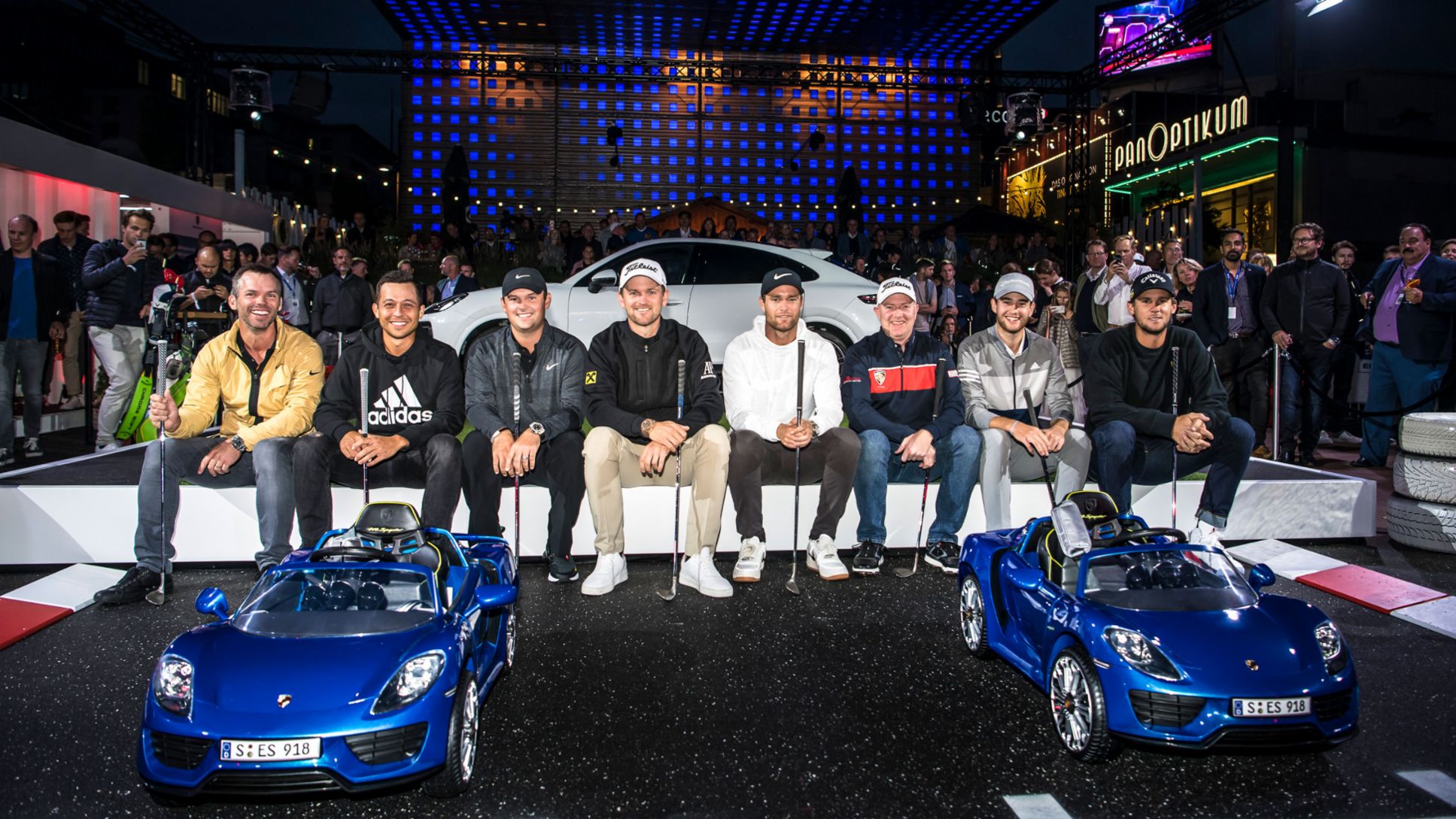 The five editions of the Porsche European Open have produced world class golf, spectacular shots and excited golf pros as amateur racing drivers. A look back at the remarkable event’s highlights.

It is 2015 when the European Open finally returns. The prestigious European Tour event, held in Great Britain between 1978 and 2009 and always an integral part of the tournament calendar, finds a new home in Germany – as the Porsche European Open. At the announcement, Bernhard Maier, the former Board Member Sales and Marketing at Porsche AG, calls the event, “a time-honoured tournament with a moving history that lists many golf legends in its roll of honour. A tournament therefore with a heart and soul that consequently is an extremely good fit for us. Above all, it’s a tournament that enjoys an excellent reputation beyond Europe and one that promises golf of the highest standard.”

The description is still spot on for the event belonging to the highest European professional golf series right up until the present day. Stars from USA, unique side events, a direct brand experience and top-class golf – the Porsche European Open, 2015 and 2016 in Bad Griesbach, Bavaria and, since 2017, on the Porsche Nord Course belonging to the Green Eagle Golf Courses complex by Hamburg are stand-out features of an outstanding event both on and off the course. A look back at the five years of the tournament.

It has already become part and parcel of the tournament week, just like the ProAm and the four competitive rounds – the Porsche Urban Golf Challenge. On the Tuesday evening before the tournament, a spectacular exhibition “match” on the Reeperbahn, the main street in Hamburg’s entertainment district, finally heralds in the Porsche European Open. In 2017, a team competition on the replica 17th hole of the Porsche Nord Course won by USA – represented by Patrick Reed and Jimmy Walker – thrilled the spectators on the Spielbudenplatz square.

In the following year, the pros were challenged by a course containing three different themed segments – “Hamburger Dom”, northern Germany’s biggest festival, “Street Art” based on Hamburg’s famous art scene and “Hamburg Harbour”. Teeing off from a platform, the pros had to hit various hazards and in doing so score points. The title was once again bagged by USA: Pat Perez was happy with the win (“The atmosphere here was simply fantastic. We had a lot of fun together.”) and with the traditional trophy, namely a personal Porsche for the tournament week.

Last year, the Belgian Ryder Cup player Thomas Pieters triumphed in a golf duel with miniature Porsches against an illustrious field containing the US stars Xander Schauffele and Patrick Reed plus England’s top golfer Paul Casey and enthused: “Playing golf right in the middle of the city was so much fun. It was a fun event – and I was the quickest, just like a Porsche.“

The goal of the world class golfers at the Porsche European Open? Victory, but the players also react almost as euphorically at the chance of being able to test the latest Porsche models on a training course and on the roads around the golf club. Many top athletes take up the opportunity during the week of the tournament. In the first year, the Ryder Cup heroes and Porsche fans Graeme McDowell (Northern Ireland) and Peter Hanson (Sweden) enjoyed a drive in a 911 Carrera 4 GTS Cabriolet. McDowell summed up by saying: “Great roads, great cars, a fantastic experience.” In 2016 and 2017, pros Thomas Pieters and Nicolas Colsaerts plus Peter Hansen received expert tuition from Porsche works drivers and the golf fan, Patrick Pilet.

After the move to the Porsche Nord Course, a part of the Green Eagle Golf Courses complex by Hamburg, the bends of the ADAC Driving Safety Centre in Lüneburg took centre stage. Paul Casey enjoyed a special day in a GT3 RS. “Simply dreamlike and the perfect warm-up for the tournament week,” enthused the Englishman in 2018. It also involved driving a Porsche Cayenne off-road. In doing so, he became aware of the parallels with the game of golf: “On-road feels like a fairway, off-road more like the rough. To be honest, I prefer the fairway – when driving sports cars and playing golf.” Casey displayed talent as did Matt Kuchar, who one year later discovered his feel for driving in a GT3 RS at the centre in Lüneburg. After a slalom session, he was praised by his Porsche Experience Driving Instructor Jussi Kumpumäki: “Matt really surprised me. He did very well indeed.”

Both golfers and visitors can show their skills in the unique Porsche Public-hole-in-one. Alongside world class golf, a wide-ranging Porsche experience on and off the course is also a tradition – a highlight is the chance to win the official Porsche hole-in-one vehicle with an ace at the 17th hole on the Porsche Nord Course – for example a brand new Taycan Turbo. Visitors have to first hole a 30-metre putt on the Public Village’s Porsche Public Hole-in-One. This then qualifies them for the evening shoot-out on the seventeenth where they have the chance to hit a dream shot and win the dream car.

Spectators have never enjoyed such luck up until now, but the German pro Marcel Siem, playing his 400th Tour event, holed his tee shot on the seventeenth and celebrated the winning of Porsche Panamera Turbo Sport Turismo. “That today was my third hole-in-one on the European Tour. Once there was a handshake, once there was a bottle of Champagne – and now finally something decent,” said Siem after his magical 156-metre strike with a seven iron.

On the same day in the same year, Patrick Reed managed a rare feat. The US golfer holed his second shot from a distance of 208 metres on the eighteenth – an albatross on the par 5 and the first ever for Reed. “When the ball went into the hole, I could only think, ‘Thank goodness I don’t have to putt’,” he said laughing. Reed did not receive a Porsche for the spectacular show-stopper, but he was given a top quality Porsche Design BOOK ONE by Oliver Eidam, Head of Brand Partnerships and Sponsoring at Porsche AG. The extremely light 2-in-1 notebook thrilled Reed: “Wow, that looks pretty cool.”

Porsche fan Reed also appeared at the Porsche European Open in the following two years. He is therefore one of numerous US stars glad to embark on the otherwise seldom used journey over the Atlantic to Europe. The group of American golfers is an important part of the tournament’s starting field every year. On the one hand on the course thanks to the awesome skills of the world class golfers. On the other as a spectator magnet due to the rare opportunities for Europeans to see the exceptional sportsmen from close-up.

Bryson DeChambeau, Jimmy Walker, Pat Perez, Hunter Mahan and Xander Schauffele are just a few of the names that also position the Porsche European Open globally and create a unique selling point on the Tour. In doing so, sports cars from the Porsche brand always play an important role when the top players agree to come to the tournament. For shooting star Schauffele, whose father, like Porsche, comes from Stuttgart, his premiere in Germany in 2019 was very special for family reasons. “I grew up with Porsche. The logo with the pointer to Stuttgart was always very important to my father. And therefore for me to. There was always the rule, if I splash out money for a car then for a Porsche,” related Schauffele when out on a drive in a 911 S around the Hamburg city centre.

The Porsche Urban Golf Challenge served up the perfect opening to the 2019 Porsche European Open. 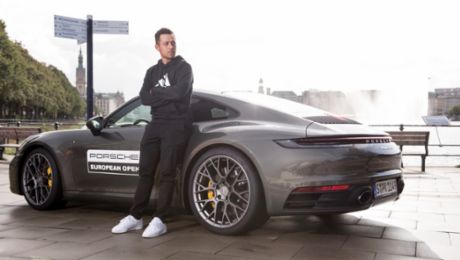 The world number nine Xander Schauffele is the highest ranked player in the strong field. 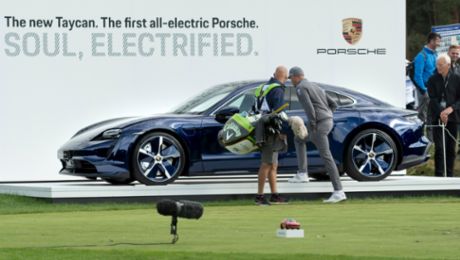 The 2019 Porsche European Open has, alongside a top field, another protagonist that is causing quite a stir.