For many car enthusiasts, taking their prized classic out on summer weekends is fulfilment enough. Not so Ben Coombs, for whom daily-driving a 944 for five years was merely the beginning of a life-changing adventure.

Coombs, a British engineer, first bought his Alpine White 944 in 2002. It was a standard 2.5-litre Lux model with five speed manual transmission, already showing 217,000 kilometres on the odometer. It was immediately put into daily service as his only car, serving both weekly commuting duties and longer holiday drives around the country and into Europe.

“I decided to sell my Porsche 944 with one last hurrah.” Ben Coombs

By 2007 there were over 320,000 km on the clock and Coombs decided to buy something more suitable for his work commitments. “But I had so many memories with that car that I didn’t want to simply sell it to a stranger,” Coombs explains today, “so I decided it should go out with one last hurrah.”

The goal Ben set himself, along with his friend and co-driver Laura Reddin, was to drive the 944 from England to Cape Town on the southernmost tip of South Africa, a journey of over 21,000 km. With little money between them, the only modifications they made to the 22-year old high-mileage sports car were to raise the suspension by 50 millimetres and fit a homemade roof tent fashioned from a piece of plywood. At least, that was all that they’d planned for.

“Seventeen days before we left,” Coombs recalls, “the oil pump failed and damaged the original engine. I’d bought a scrap 944 to take spares from for the trip like drive shafts and shock absorbers, so I took the engine out of that and the garage who had raised the suspension installed it for me. It first ran at 10am on the Friday we were due to leave, and it wasn’t perfect. But we couldn’t delay the trip because of our visas and ferry crossings, so we set off. I didn’t really expect to get as far as Dover.”

The couple made it into France, however and resolved to press on through Europe. “I have an engineering degree so can go back to first principles,” Coombs explains, “but I was wet behind the ears in terms of hands-on mechanics. Nevertheless, I managed to find and fix a minor vacuum leak which greatly improved the running. And we were inspired to keep going by the sense of adventure.”

The Porsche 944 in Syria

What followed was a heroic team effort, both in terms of physical endurance and mental positivity. A week of driving through Europe and Turkey brought the car to the Syrian border, the moment at which the going would get more serious. But the car was running well and the pair resolved to continue, driving though Syria and Jordan before catching a ferry to Egypt.

The Porsche 944 in Egypt

After countless hours of complex paperwork at the port, the 944 finally emerged onto Egyptian soil, now proudly wearing Egyptian number plates, and headed for Cairo. “Driving past the pyramids,” Ben says, “that was the first moment where it actually felt like we were achieving something. But in truth it was only the start of our journey across Africa and we still had around 16,000 km to go.”

The Porsche 944 in Sudan

After crossing Egypt, the 944 faced its first major hurdle, the Nubian Desert. This was 500 km of unmade roads, simple corrugated dirt tracks that weaved their way through the vast, empty expanses of southern Sudan in temperatures that regularly passed 40 degrees Celsius. “The Porsche could take the punishment,” Coombs says. “All we lost was the exhaust, but we just strapped it to the roof and on it went.”

The Porsche 944 in Ethiopia

The journey led from here into the relatively greenery of Ethiopia and on to the border with Kenya where car and drivers faced what had always promised to be their greatest single challenge of the trip. The road from Moyale to Marzabit skirted the disputed and dangerous border between Kenya and Somalia, a lawless region that bore frequent witness to violent tribal skirmishes and smuggling.

The Porsche 944 in Kenya

“It’s 500 km of really bad roads where it is understood you just do not stop. Let alone break down,” Ben explains. “We were formed into a convoy with the Kenyan army as an escort, but it had rained for the first time in two years and the roads had turned to soup. We couldn’t keep up with the trucks in these massive ruts and were eventually abandoned in the middle of this bandit-ridden tribal war zone.”

The Porsche ploughed on, however, its underside taking a beating from the rutted and rock-strewn road. In Marzabit, the 944 underwent repairs to a damaged fuel pump before setting out to complete the final section of this perilous part of the journey that would land the couple in Nanyuki, on the equator and still 8,000 km from their destination.

The Porsche 944 in Tanzania, Botswana & Namibia

Coombs describes the next few days as being relatively trouble free, passing through Uganda and Tanzania where the only hitch was a robbery that saw Laura’s passport stolen. By now the car was showing over 350,000 km, at least 1,600 km of those essentially off road. Wherever they now went, through Malawi and Zambia, they were greeted with a mixture of confusion and excitement at the site of this increasingly careworn 1980s sports car. Botswana and Namibia led to the cinematic and eerie Skeleton Coast and the last big challenge of the journey, the Namib Desert.

“The sun was setting as we began to cross the Namib,” Ben says, “and we had this feeling that nothing could stop us now. We were doing about 65 km/h when one of the ball joints fractured and we didn’t have a spare. So we used ratchet straps and cable ties to lash it back together.”

This temporary fix held and failed time and again as pitch darkness descended. With a powerful lightning storm rolling in off the South Atlantic, the couple slept fitfully in the 944’s cabin until dawn before trying again. Eight further attempts to make the ball joint hold eventually bore fruit and they were able to crawl out of the desert at just under 20mph, taking eight hours to find tarmac and the opportunity to increase their speed. Nevertheless, the 944 was still pegged to around 40mph and took two further days to cover the 1,100 remaining km to Cape Town.

“It was a dramatic finish and the car limped over the line,” Ben admits, “but it did it. Some 62 days after we left the UK, covering over 21,000 km, crossing 26 countries and five major deserts. Coming over the brow of a hill about 80 km north of Cape Town to see the grey smudge of Table Mountain on the horizon, we realised at that moment that nothing was going to stop us. I don’t think there are many sports cars I’d have the confidence to cross Africa in, but the depth of engineering in the 944 made us believe that it was possible. And we did it.” 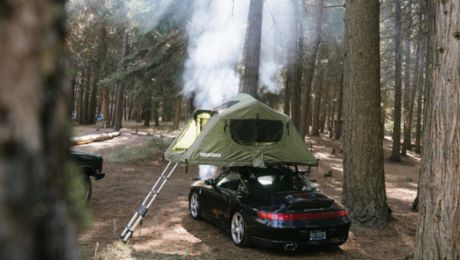 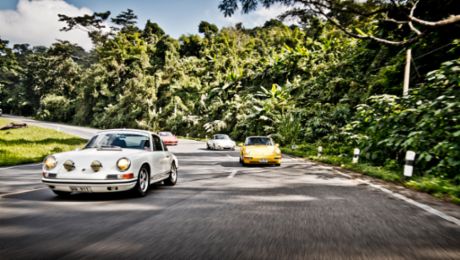