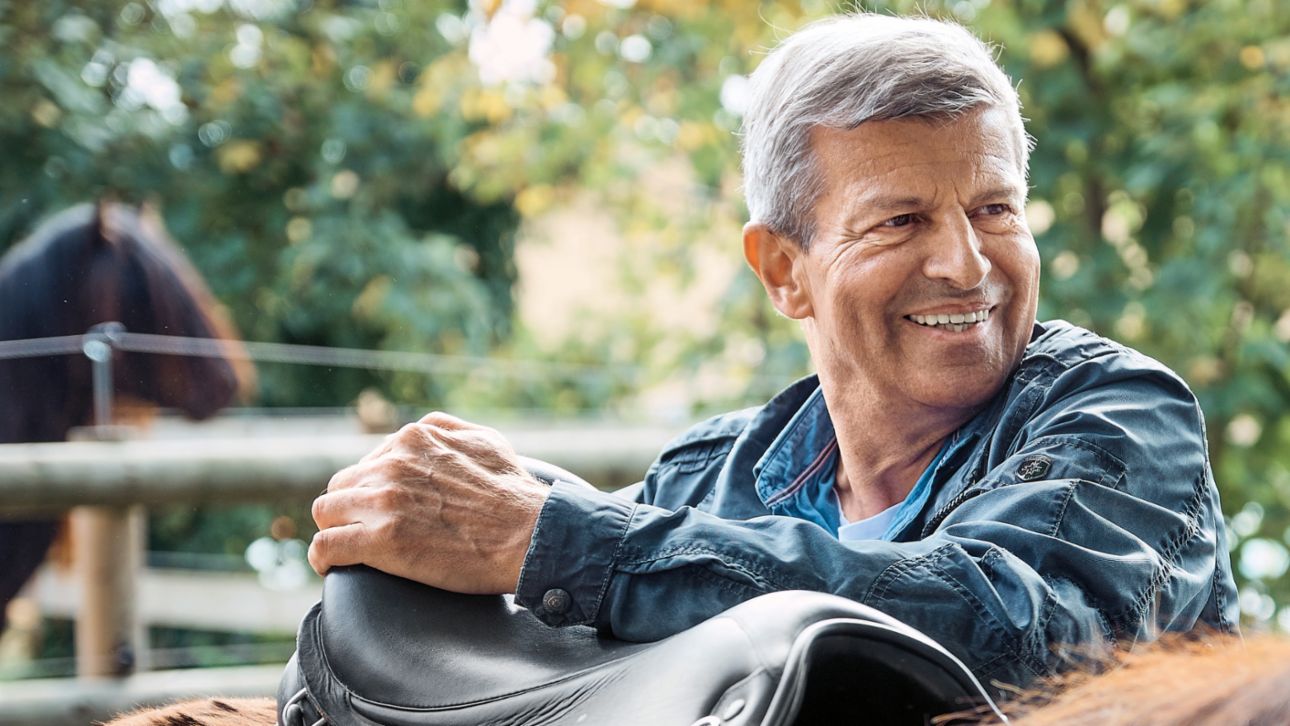 A beautiful autumn day, with hardly a cloud in the sky. The boss approaches the paddock. First, Amadeus detaches himself from the herd. His sister Nannerl follows; mother Eydis and the gelding Skratti trot behind. Fritz Enzinger beams at his four Icelandic horses and pulls treats out of his pocket. Oedhof, a picturesque stud farm an hour’s drive northeast of Munich, is a relaxing oasis for breaks from a fast-paced business. Amadeus, chewing, knows exactly how to wrap the boss around his finger. Look at those eyes! Enzinger strokes his mane. It’s hard to tell which one of them is more relaxed right now.

Mr. Enzinger, how confident are you in the saddle?
The goal is to stay on top! I’m not a very good rider, but after over twenty years of practice, at least I don’t fall off anymore.

Who’s that, looking you in the eye with such familiarity?
This is Amadeus, our “firstborn” and in fact my favorite horse. It was wonderful watching him grow up. His mother Eydis was our third horse. Our interest in Icelandic horses and riding trips came from our daughter Magdalena. At some point my wife Brigitte and I got tired of just watching her ride and started joining in. Now our granddaughter Cleo can sit on a horse as well.

With all due respect, Icelandics are not exactly considered the racers among horses.
That’s true. But they are creatures with a special sensitivity and charisma. I find it amazing how quickly they notice that you're around. Amadeus weighs over three hundred kilos and has a lot of power. Once he gets going or breaks into a gallop, it’s formidable. At the same time, a great tranquility emanates from him, which others can feel. You could call him the Taycan of horses. That car is another miracle of strength and peace. You don’t miss out on any combustion engine noise, and other sounds are perceived more acutely instead.

Would you agree with being called an outdoorsman?
Part of me absolutely is. The weekends we spend with the animals in nature and the beautiful trips to Iceland are certainly one reason I’m so balanced. I like the smell of horsehair and hay, riding out in the forest, by the sea, or in Iceland’s glacial landscape. Your perception of nature and its scents becomes more and more intense. I like animals in general: our family dog, Emma, always comes along too. Those who have animals aren’t afraid of bad weather. It’s just like on the racetrack: you need the right equipment for all eventualities. What’s more, a horse’s back has a built-in seat heater!

Do you find enough time for your horses in Bavaria, which after all, is more than 300 kilometers away from your workplace in Weissach?
Certainly not as often as I’d sometimes like. But at least for the horses, that’s not a problem. They lead a more independent life than many large horses—outdoors with a shelter instead of in boxes. That’s also why they don't have to be ridden every day. But when you do ride an Icelandic horse, you can do it for a very sustained period of time. These animals have one gait more than other breeds: the tölt is a running gait where one hoof always touches the ground, making it very comfortable for the rider.

The stud farm, the family home, the workplace—all spread around. Where are you really at home?
Styria is and remains my home, although I haven’t lived in Austria for more than thirty years. We spend Christmas there, the long summer vacation in August, and a few weekends throughout the year. The older I get, the more important that is to me. In Oberwölz, nature is doing well and is in harmony with the local, gentle approach to tourism. At the same time, from ages twelve to fourteen, I was allowed to travel with an older cousin to Istanbul, Scotland, and Morocco. That was unbelievable back then—my peers might have seen Graz or Vienna at most. Those trips gave me a certain cosmopolitanism, and the curiosity of discovery has remained with me to this day.

In all honesty, Mr. Enzinger, as someone who grew up with combustion engines, were you a fan of Formula E from the start?
Naturally, I was skeptical at first, and—like many others—could not imagine that this series would achieve such popularity within just a few years. Races were always loud, and in the pits and on the track it smelled of gasoline and exhaust fumes. In Formula E, the chirping of the electric motors mixes with the rolling noises of the tires. It’s a completely different sound. So you could say that it was love at second sight. But younger and subsequent generations will take a more impartial view. Sooner or later, kids won’t say “vroom-vroom” when they’re playing with toy cars.

How do you rate motorsports in Formula E?
There’s a fantastic power density—and it’s on the rise. For season six, ten manufacturers are involved, four of them from Germany. They all drive with the same monocoque and get identical batteries. This results in a very narrow development corridor; only the drivetrain and the associated power electronics allow for differentiation. But it’s precisely these trendsetting, detailed developments that are important when it comes to learning for series production. Formula E is clearly the most competitive environment for driving the development of high-performance vehicles in terms of environmental friendliness, efficiency, economy, and sustainability. We want to continue the success story we started in 2010 with Porsche’s first hybrid racing car.

What’s particularly important in the tight competition of Formula E?
Formula E is all about efficiency. The goal is “100 percent,” and for a single qualifying lap different laws apply than for energy management within the race. I think that we were able to benefit from many aspects during preparation. On the one hand, there’s the experience of the hybrid team from the World Endurance Championship. Not for nothing did we win both World Championship titles three times with the Porsche 919 Hybrid and just as often at Le Mans. In addition, our state-of-the-art simulator in Weissach is a big boon, as is the current racing experience of André Lotterer. But we won’t know whether all this will be enough until the season opener in Riyadh.

Why has Porsche decided not t o saddle up with an existing team for an apprenticeship year? Other manufacturers have.
That just wouldn’t be the Porsche way. One major finding from the successful long-distance program with the Le Mans prototype 919 was the tremendous importance of team spirit. I think we were able to transfer that to the Formula E team. Once again, there was a real atmosphere of start-up optimism. Over the past year and a half, the experts have come together in a great way and have meticulously set up new Porsche processes of their own. The operational strategy and software challenges are immense. The TAG Heuer Formula E Team is a genuine Weissach factory team, which was also very important to me. Of course, we are paying a price for this: other manufacturers have a head start in experience. For us, Riyadh will be a real debut with all the risks.

The great spectator appeal of Formula E has been repeatedly praised—what do you see as the reasons for this?
Formula E races are extremely compact events—so everything is trimmed for efficiency. From training to qualifying to racing, everything takes place on a single day. The race duration of less than one hour makes the series very TV-friendly and therefore attractive for spectators and sponsors. The unique character of the event can be experienced on-site. The culinary and entertainment offerings are huge, and there are many hands-on activities for you to experience various mobility concepts for yourself. And with attractive metropolises as venues, a race visit can be combined with a city trip. The bottom line is that Formula E appeals to a very broad public.

Digital offerings—such as Fanboost and real-time simulation—play an increasingly important role in Formula E races. What does gaming mean to you as a member of the baby boomer generation?
The rapidly growing worldwide gamer scene fascinates me very much. Our involvement and our own Porsche Motorsports team are also growing. E-sports and real sports are beginning to network. Presenting the Porsche 99X Electric in the form of an interactive video game—the Ghost Racing app—was a pioneering achievement. There’s a lot going on here in an incredibly short time; fundamentally new business models are emerging. You always have to be open to new things.

What do you think will be decisive for Formula E to enjoy lasting success?
It must remain consistent, both in terms of technology and the city racing format. There’s a road map for 2023—so everyone knows where the journey is headed. The concept of common parts remains unchanged. In view of the company’s commitments, this must also be handled judiciously; otherwise, the whole thing will get out of hand financially. The regulations limit the operational team size to twenty employees. Efficiency therefore also means multiple functions. By way of comparison, in the LMP program we were on the track with sixty operational people. Formula E testing is limited to fifteen days a year. Here, too, efficiency is the top priority.

Sixty-three-year-old Fritz Enzinger, born in Oberwölz, Austria, joined Porsche AG in 2011. Since then, he has contributed to numerous title wins for the brand: from 2015 to 2017, Porsche won both the Manufacturer and the Driver World Championship titles at the FIA World Endurance Championship (WEC) three times in a row—including three consecutive victories at Le Mans with the Porsche 919 Hybrid developed under Enzinger’s aegis. In 2019 Porsche secured additional WEC titles in the manufacturers' and drivers' standings in the GTE Pro class. 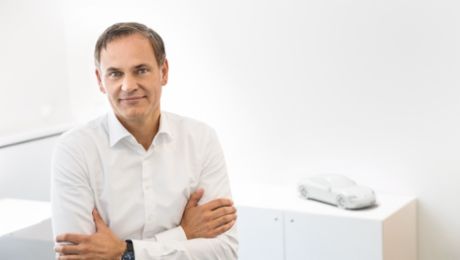 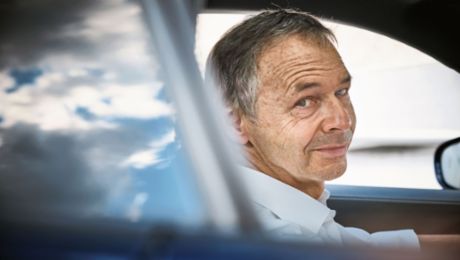