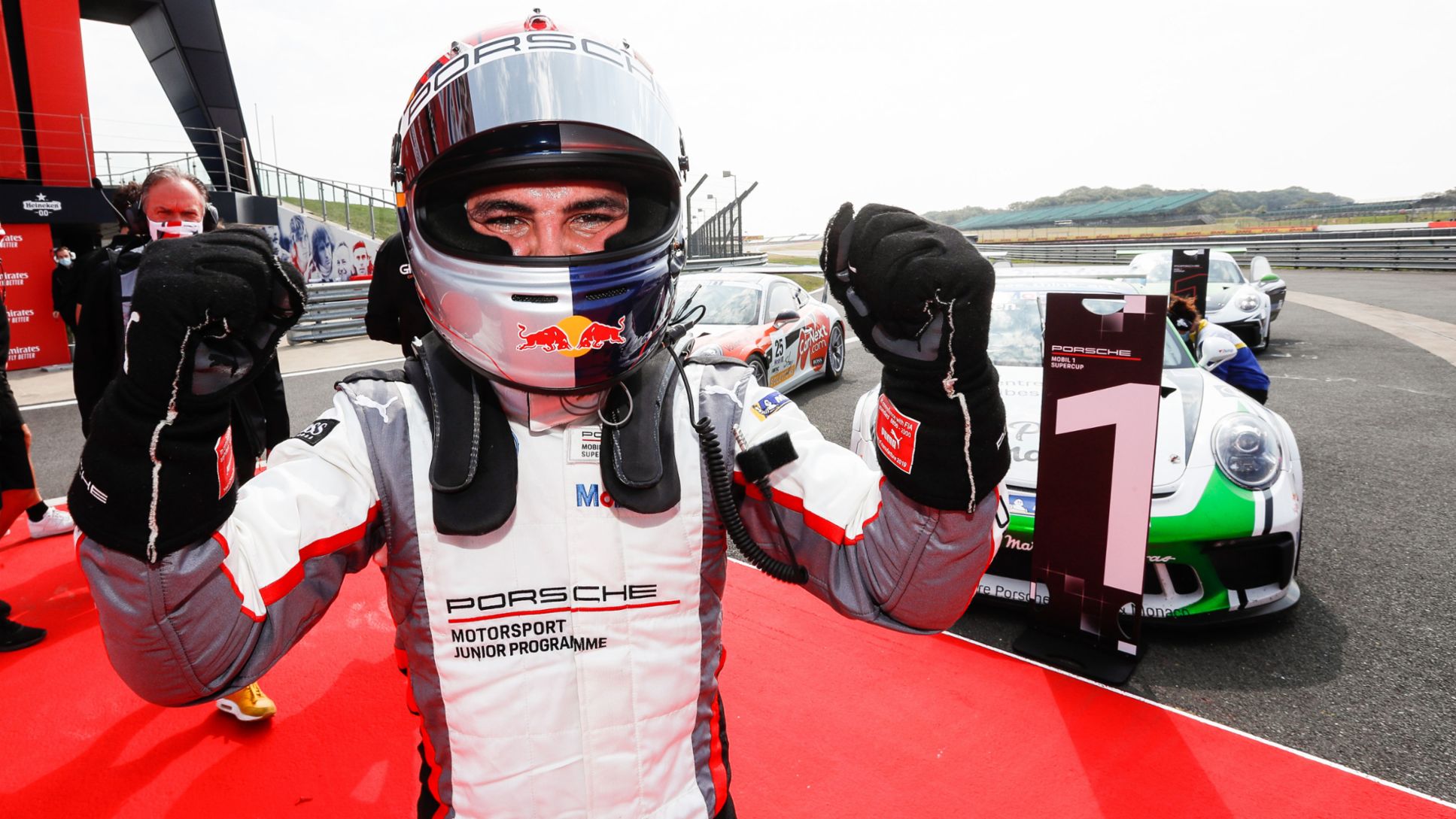 Silverstone is proving to be lucky turf for Ayhancan Güven. In 2019, he celebrated his very first victory in the Porsche Mobil 1 Supercup. At round five of the 2020 season, held on the occasion of the “70th Anniversary Grand Prix” to honour Formula 1, the Turk, who had advanced to Porsche Junior in the meantime, was once again at the very front.

Güven won after a duel against Larry ten Voorde (The Netherlands/Team GP Elite) over almost the entire 13-lap race distance. Hot on their bumpers, Dylan Pereira (Luxembourg/BWT Lechner Racing) crossed the finish at the wheel of his Porsche 911 GT3 Cup third to defend his overall lead in the international one-make cup.

“Initially, I kept making the same mistake every lap, always in the Maggotts-Becketts corner combination,” Güven admitted. “Luckily, I managed to fend off all of Larry’s attacks. Once I finally got Maggotts-Becketts sorted halfway through the race it was easy.” After having to settle for eighth place last weekend at the same venue, Güven dedicated his first victory of the season to his mechanics. “We’ve improved with the car setup from race to race. We have to keep working in this direction.”

Ten Voorde paid tribute to the winner: “I think I would’ve been a little faster than Ayhancan, but he drove an almost flawless race and I had no real chance to overtake him,” explained the Dutchman. Pereira was satisfied with his personal performance compared to last weekend at Silverstone where he finished sixth. “We’ve made significant progress in the setup of my car,” said the points’ leader. “That makes me confident for the upcoming races.”

Behind the trio Güven, Ten Voorde and Pereira, another gripping fight unfolded between the rookies Max van Splunteren (The Netherlands/Team GP Elite) and Jean-Baptiste Simmenauer (France/Lechner Racing Middle East). The two fought wheel-to-wheel on several occasions, however, Simmenauer always had to concede. “After the safety car phase my tyres picked up debris, which is why Dylan Pereira could overtake,” declared Van Splunteren. “Luckily, I managed to fend off Jean-Baptiste afterwards. Our clash was fantastic and always fair.” The third-best rookie was Marvin Klein (France/Martinet by Alméras) on sixth place.

The safety car phase that Van Splunteren mentioned was prompted on the first lap when several drivers clashed in a chicane. The cars of Jordan Love (Australia/FACH AUTO TECH) and Moritz Sager (Austria/Dinamic Motorsport) were badly damaged, signalling an early end to the race for the pair after just a few hundred metres.

Victory in the ProAm class went to Philipp Sager (Austria/Dinamic Motorsport), narrowly beating Roar Lindland (Norway/Pierre Martinet by Alméras) and Clément Mateu (France/Pierre Martinet by Alméras). “I had the right idea when my son got caught up in an accident in front of me. In all the chaos, I slipped past Roar. He tried everything, but I managed to keep him behind me,” said Sager.

The Porsche Mobil 1 Supercup teams now travel straight to Barcelona. There, they will contest round six this coming weekend as part of the Spanish Grand Prix.

“I have to thank my race engineer and my mechanics for this pole position,” underlined Güven, who had to settle for eighth place at last weekend’s Silverstone race. “We’ve worked very hard over the last days to improve my car compared to last weekend.” For his part, Ten Voorde had a simple explanation for why he was not on pole this time: “I made too many mistakes on the decisive lap.” Roar Lindland (Norway/Pierre Martinet by Alméras) was once again the fastest in the Pro-Am category and will take up the race from P18.

The two Porsche Juniors, Güven and Jaxon Evans (New Zealand/BWT Lechner Racing), are assisted by a seasoned Porsche Mobil 1 Supercup specialist: the junior coach Sascha Maassen. The 50-year-old German achieved several class victories in the Porsche 911 RSR at the 24 Hours of Le Mans (France) and the 12 Hours of Sebring (USA). He has also contested the Supercup and won two races. “It’s been my role since 2013 to mentor the Porsche Juniors,” explains Maassen. “Here at Silverstone, in fact at every race weekend, we begin by lapping the circuit on foot.” That exercise also gives the coach the chance to gauge his protégés state of mind. “Providing mental support is a very important part of my job.”

The task becomes tricky for Maassen when it comes to remaining neutral. “I can’t tell either of the Porsche juniors what I deduce from each other’s data recordings. That’s only being fair towards their teams,” he describes. “We can only discuss what I notice on the racetrack.” At Silverstone, for instance, the last chicane before the right-hander leading onto the start-finish straight is critical. “Here, some competitors found a better line during Friday’s Free Practice. Of course, that was a point of discussion with Ayhancan and Jaxon,” reveals Maassen. While Güven implemented this tip perfectly, Evans struggled. “It wasn’t a problem with the car; I simply made too many mistakes.” After claiming a strong third place last Sunday, the New Zealander this time qualified on eighth. “Scoring another podium spot will be very, very difficult.”

The fifth of eight 2020 Porsche Mobil 1 Supercup races kicks off on Sunday (9 August) at 11:30 am local (12:30 CEST). Fans can follow the action via live stream on F1TV.formula1.com, live timing is available on www.porsche.com/supercup-livetiming.