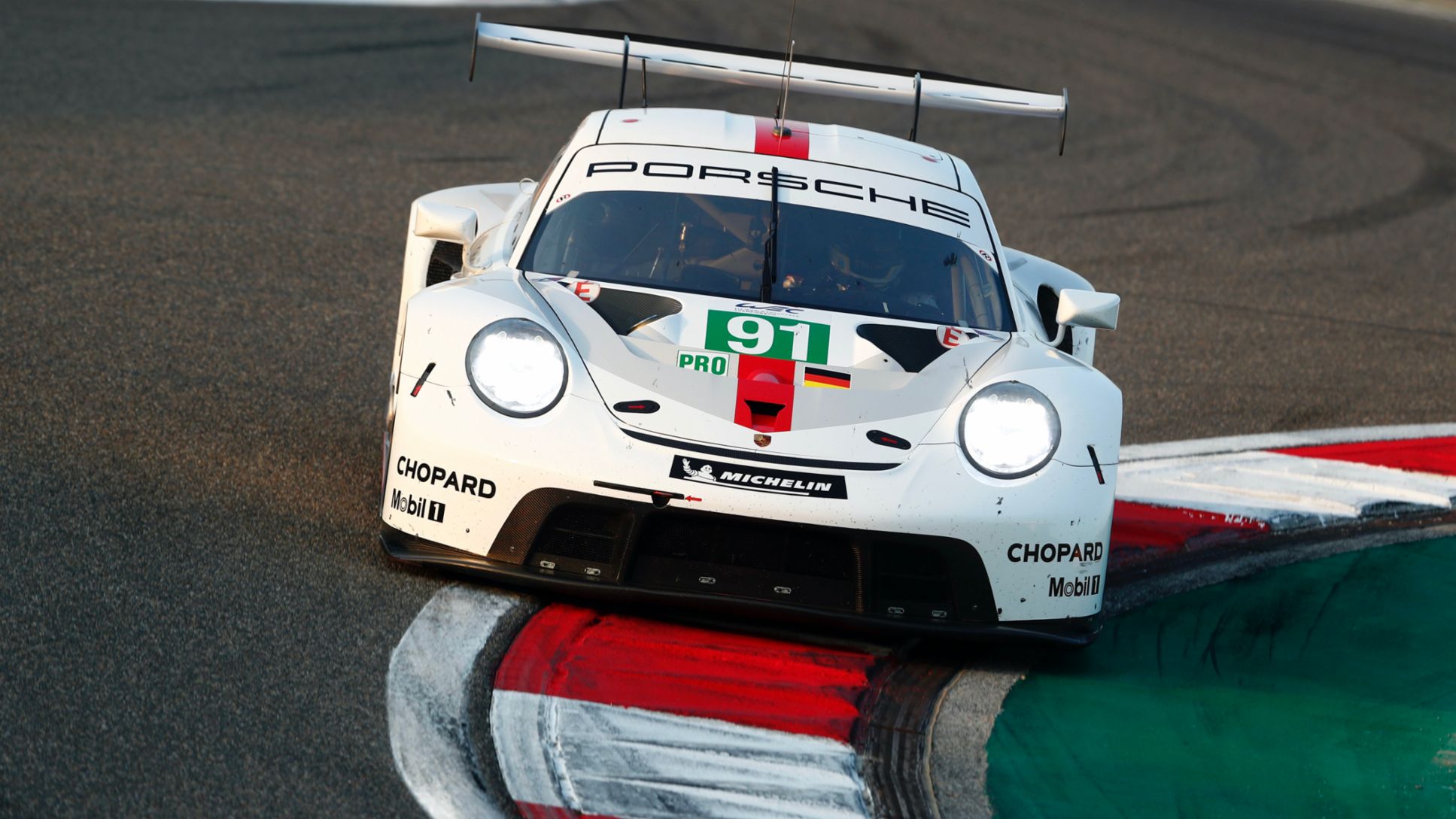 The driver crews are set: Porsche goes trophy hunting in the GTE-Pro class at the 24 Hours of Le Mans in mid-June with 12 drivers. Four Porsche 911 RSR will be driven by successful Porsche works drivers and Young Professionals.

Lining up on the grid are the current WEC world drivers’ champions Kévin Estre (France) and Michael Christensen (Denmark) as well as the IMSA champions Earl Bamber (New Zealand) and Laurens Vanthoor (Belgium). Richard Lietz (Austria), the two Frenchmen Frédéric Makowiecki and Patrick Pilet, Nick Tandy (Great Britain) and the Italian Gianmaria Bruni have also stood at the top of the podium at classics like Le Mans, the 24-hour race at the Nürburgring, the Ardennes marathon at Spa-Francorchamps and the prestigious races at Daytona and Sebring (USA). Young, ambitious drivers such as the Frenchmen Julien Andlauer and Mathieu Jaminet as well as Matt Campbell (Australia) round off the top-notch driver line-up with which Porsche tackles the 88th edition of the 24 Hours of Le Mans.

Continuity in the driver line-up

Porsche relies on continuity in its bid for Le Mans victory. The two WEC vehicles will line up on the Le Mans grid with the same crew for the third time in a row. Gianmaria Bruni, Richard Lietz and Frédéric Makowiecki once again share the cockpit of the No. 91 Porsche 911 RSR, with Kévin Estre, Michael Christensen and Laurens Vanthoor driving the 2018 winning car with the starting number 92. The crews in the two Porsche 911 RSR (2019 model year) that usually contest the IMSA WeatherTech SportsCar Championship have been reshuffled. Joining Earl Bamber and Nick Tandy in the ca. 515-hp nine-eleven (#93) is Matt Campbell, who contests his first season as a Porsche works driver. The seasoned racer Patrick Pilet joins forces with his young compatriots Julien Andlauer and Mathieu Jaminet to form an all-French driver trio in the No. 94 vehicle.

Mentor Patrick Pilet and his protégés

The three Frenchmen enjoy a very special relationship. After winning the French Porsche Carrera Cup in 2007, Patrick Pilet was given the responsibility of looking after the national juniors the following years. When Jaminet and Andlauer joined the racing series, Pilet took the talented pair under his wing. By helping his young compatriots check out the racetracks and coaching them in tactics, the experienced Porsche works driver forged a very special relationship with the two youngsters. “He knew everything about the racetracks, the strategies and the car and instilled in us the special Porsche spirit,” recalls the Porsche Young Professional Andlauer. With his mentoring came success. Jaminet, now a Porsche works driver, won the Porsche Carrera Cup France in 2016. Andlauer clinched the championship in 2017, and in 2018, at the age of 18, became the youngest class winner at Le Mans in the GTE-Am category. He is the defending champion of the Porsche Carrera Cup Deutschland. At Le Mans this year, Pilet will have come full circle. “I’ve accompanied Mathieu and Julien for quite some time on their journey as racing drivers and I’ve developed a close bond with them. It’s an honour and a pleasure for me to share the cockpit at Le Mans with these two talented young men. Together, we’ll attempt to win the world’s most prestigious endurance race.”

At the Le Mans long-distance classic, Porsche achieved a double victory in the GTE-Pro class in 2018. Estre, Christensen and Vanthoor held the lead over almost the entire distance with their No. 92 Porsche 911 RSR and celebrated their win at the 24 Hours of Le Mans after a flawless performance in the “Pink Pig”. The No. 91 sister car finished on second place, with Frédéric Makowiecki succeeding in fending off his closest rival in a spectacular 90-minute duel.

A year later, Bruni, Lietz and Makowiecki repeated the podium result in the No. 91 Porsche 911 RSR, with the No. 93 sister car following them across the line at Le Mans after 24 hours in position three. While making a play for the lead, both GT cars were foiled by safety car phases. After 24 hours, they were less than 70 seconds shy of the class winner at the world’s toughest endurance race. Bad luck plagued the title defenders. While running in the lead, a technical problem cost the No. 92 Porsche 911 RSR six laps and relegated the vehicle down the field. Nevertheless, Estre and Christensen with Vanthoor’s support collected enough points to be crowned the FIA WEC world drivers’ champions.

#LeMans24 - The driver crews are set: #Porsche goes trophy hunting in the GTE-Pro class at the 24 Hours of Le Mans in mid-June with 12 drivers. Further information and free downloads ⬇️ https://t.co/jDb0dwbQkA

Fritz Enzinger (Vice President Motorsport): “Fielding the four works cars again in the GTE-Pro category at Le Mans underlines how important this classic is for Porsche. With the championship squads from the FIA WEC and the IMSA WeatherTech Championship, we have a treasure trove of expertise at the start plus a good balance of experienced and young drivers. We aim to fight for victory, but we know from experience that such long-distance races are full of surprises.”

Pascal Zurlinden (Director GT Factory Motorsports): “We’re travelling to Le Mans with a strong car and fast, experienced driver crews. With this powerful overall package, we intend to and will go for victory. The GT teams from the WEC and IMSA are extremely compatible. All drivers are familiar with the circuit and know what needs to be done at the 24-hour race.”

Alexander Stehlig (Head of Operations FIA WEC): “The same driver trios will tackle Le Mans at the wheel of the 91 and 92 Porsche 911 RSR racers for the third time straight. Each of the two regular WEC drivers will be supported by an experienced pilot. This continuity has the advantage of allowing the crews, engineers and mechanics to work together in perfect synergy. Since Le Mans is the last WEC race of the season, we don’t want to take any chances with new driver line-ups in the final bid for the title.”

Steffen Höllwarth (Head of Operations IMSA Championship): “We’re proud and delighted to again be represented by four factory cars at the highlight of the season. With both driver crews in the number 93 and 94 Porsche 911 RSR, we’ve put together a good mix of experienced and young drivers. Alongside seasoned IMSA drivers like Tandy, Bamber and Pilet we have the young drivers Matt Campbell, Mathieu Jaminet and Julien Andlauer, who have already proven themselves at long distance events. With these teams we’re excellently positioned to tackle the season highlight at Le Mans.” 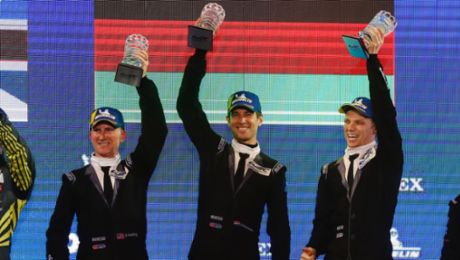 Porsche has concluded the 2019 year with another victory in the FIA World Endurance Championship. 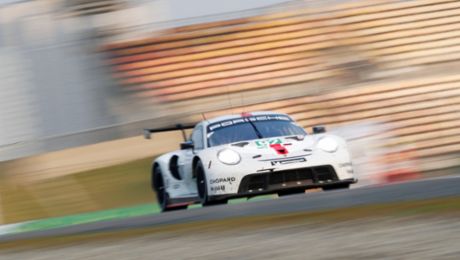 Scoring two podium finishes at round three of the FIA WEC, Porsche has expanded its lead in the world championship. 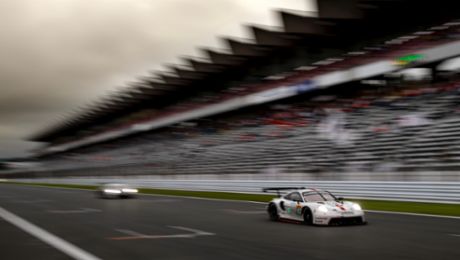 Porsche has successfully defended its lead in the world championship at round two of FIA WEC. 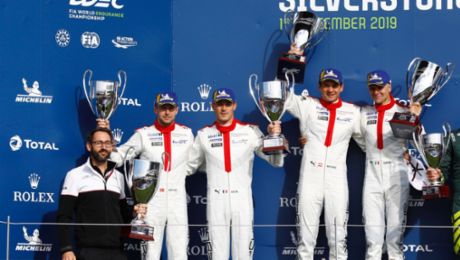 Perfect debut: One-two for the new Porsche 911 RSR at Silverstone

At the season-opening round of the FIA WEC at Silverstone, Gianmaria Bruni and Richard Lietz crossed the finish line first.