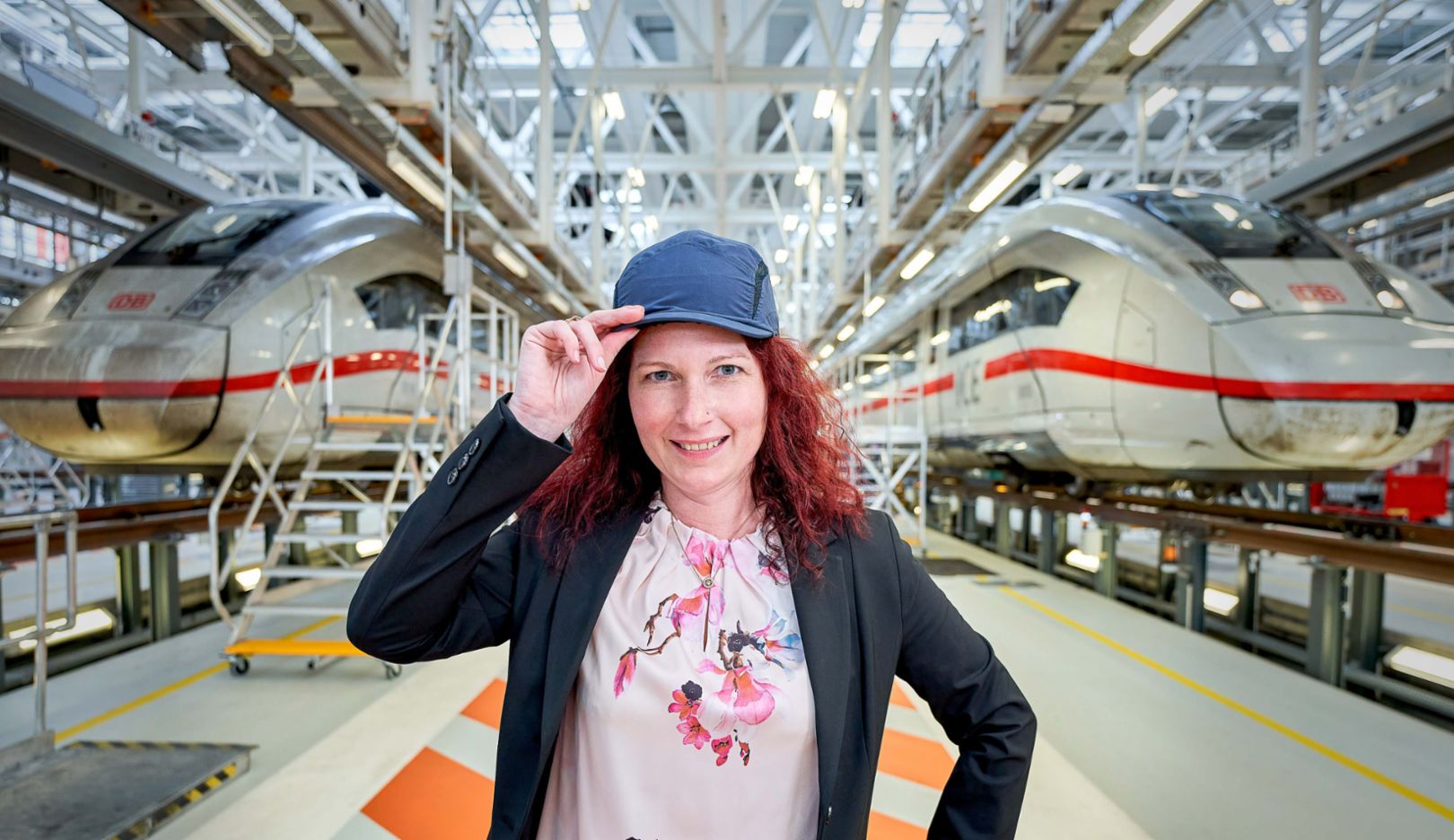 The last passengers have hardly disembarked before nightly maintenance work on the fleet of ICE trains begins. A precise timetable is important here too, as shown by a visit to Deutsche Bahn’s newest maintenance depot.

The sun has gone down. A shutter gate rises and the signal switches to green. A white high-speed Intercity Express train glides at a walking pace onto one of the four tracks in the 410-meter hall. It comes to a stop at precisely the place marked for it—in Deutsche Bahn’s most modern maintenance depot. This sparkling clean and environmentally friendly facility in the Nippes district of Cologne just started operating in June of 2018. Sonja Askew is the site’s manager of train preparation and maintenance. She leads a team of technical specialists who meticulously inspect both the outside and the inside of the high-speed trains every night. After being cleaned and repaired, the trains are dispatched early the next morning on time to set off on their inter-city journeys with more than 800 passengers on board.

When the ICE comes to a stop, the site manager glances at the clock. The train is scheduled for an “IS 200” drivetrain inspection and review. The code stands for the second-smallest routine maintenance session. In less than six hours the next passengers will already be waiting for this ICE 3, which is 200 meters long, weighs 410 tons, and is authorized for a peak speed of 330 kilometers an hour. Its scheduled maintenance now has to run like clockwork, similar to a pit stop at a racecourse. The focus is on safety, quality, and a comfortable ride for its passengers. Something else counts too: absolute punctuality. If the train doesn’t arrive at Cologne’s main train station on time the next morning, this would not only annoy the travelers waiting for it but also cause problems for the busy rail network in general. It would set off a cascade of delays.

Strict checks all around

From city to city every thirty minutes

The Deutsche Bahn mobility group is constantly working to improve the many factors that affect the on-time record of its rail services. The group’s efforts are now even more important in light of the ambitious aims it has set itself. In the future it wants to shorten the intervals for its fastest trains within Germany. “We’re going to have our trains depart for major German cities at consistent thirty-minute intervals,” says Berthold Huber, Management Board Member for Passenger Transport, in explaining one of the pillars of the group’s strategy. Called “Starke Schiene” (“strong rails”), it is intended to make trains the most attractive means of travel. And it has good prospects for success. Modern, high-performance rail connections with a special focus on customers are what the passenger transport sector needs. They are viewed as the heart of an intelligent network of future-oriented transportation. Furthermore, the crisis in the aviation sector triggered by the Covid-19 pandemic could lead air travelers to switch to trains—not only for their private needs but also in the more lucrative national business-trip sector.

Huber announced that Deutsche Bahn plans to launch its half-hour schedule of departures within Germany on a truly well-used set of rails—the very popular connection for business and private travelers alike between the port city of Hamburg and the capital city of Berlin. An ICE train covers the total distance of around 280 kilometers on that flat stretch with some perfectly straight high-speed segments in only 106 minutes. Cars often need twice as much time.

Deutsche Bahn is offering introductory prices of well under 20 euros in a 2020 marketing campaign, even though it has virtually no competition beyond slower inter-city buses. For profitability reasons, flights for this relatively short distance were stopped back in 2002. But the high demand for rail service here deserves a correspondingly high level of quality. More trains will be needed to meet the goal of thirty-minute intervals. They will also clock more kilometers and need correspondingly more maintenance, inspections, and repairs.

Working with experts from Porsche Consulting

Twice the performance — how is that possible?

“At Deutsche Bahn’s ICE high-speed rail service maintenance depot, the ideal situation is similar to that of a pit stop on a racecourse. Every second counts and everyone on the perfectly trained team does their job at just the right moment,” says Christian Dittmer-Peters. As a partner at the Porsche Consulting management consultancy, he and his team of experts helped Deutsche Bahn achieve the important goal of servicing eight instead of four trains in a single shift at its depot in Cologne. “Improved planning and control with digital support, standardized communications, and intensive training for everyone involved have led to better coordination of personnel and better use of resources. Clear visuals mean that everyone can monitor workshop processes,” adds Dittmer-Peters. The most important and obvious goal: as soon as an ICE train is finished, it leaves the track free for the next one. The motto here is never to waste valuable time in the “pit” and to always return rapidly to the track—just like at a car race.

This is where maintenance depots in Cologne and eight other locations for long-distance rail travel enter the picture. They need to service more trains each night without lowering their safety or quality standards. But they also need to keep costs under control. Site manager Sonja Askew began working on improving her new depot’s performance right after it opened, with the support of specialists from Porsche Consulting. Together they concentrated on optimizing processes, enhancing plannability, and building an overall team with excellent communications. This approach has worked well. “We can now do maintenance work on eight trains a night instead of four,” says Askew. “We’ve achieved this in large part by ensuring a high degree of transparency in how we control our work, plus a perfect schedule that all of our team members follow.” Here it should be noted that Askew and her staff are dependent on a great many factors. Such as when the trains actually arrive at their depot. Or surprises like a cracked windshield on an ICE driver’s cab, or any number of other problems that have to be dealt with right away. Precisely for this reason the depot also needs the greatest possible flexibility.

Hans-Peter Müller, a specialist in planning and control, and nine of his team members sit at monitors in the depot’s office building. They draw up plans one and a half years in advance for the trains that will undergo maintenance work in Cologne. Their work considers questions like what tasks need to be done, how long these will take, and how much buffer time should be allocated. For Müller, a “train fan from day one,” all the planning revolves around a single target figure, namely, schedule point 1. That is when maintenance work is completed and the train leaves the depot at a precisely defined time—and moves into a designated free slot in the dense traffic on Cologne’s rail lines. Philipp Stadie, who coordinates train departure from the depot, needs to put these plans into action while also retaining a degree of flexibility. He communicates with people like the depot’s locomotive engineers, known as train runners. They drive the ICEs four kilometers to Cologne’s main station where the engineers for long-distance travel promptly take over the controls.

Eyes on the goal

Because plans do not always proceed as expected due to unforeseen events, the depot also has a lot of “ad hoc” business, as Niklas von Hollen calls it. As the deputy director of vehicle systems, this mechatronics engineer is responsible for ensuring that workshop operations run as efficiently as possible. Before ICE trains roll into the depot in the evening, they transmit electronic status reports during the day. Locomotive engineers and attendants also report problems that von Hollen immediately assesses. Whether it’s a matter of the coffee maker in the on-board kitchen, the air conditioning, or the traction system, the maintenance crew can save a lot of time if they are perfectly prepared for their specific tasks before the ICE actually arrives. This includes knowing what special tools they will need, which technological processes will be employed, and what materials need to be ready right at the installation site. But von Hollen also wants to reduce the number of repairs in general. Predictive maintenance can prevent the need for repairs in the first place. Replacement intervals for wearing parts can be shortened, and the quality of materials used can be improved. This type of thing is much easier to plan than ad hoc operations.

Emre Ibis is the materials management specialist who ensures that the right replacement parts are ready for use. “I need to be well organized and coordinate closely with our suppliers in order to have the right materials in stock and bring them immediately to the repair tracks,” he says. The range of parts is wide and varied. In addition to the ICE 3 and the new ICE 4, Deutsche Bahn operates three other generations. The trains have service lives of thirty or more years, including modernization periods.

Ibis has to ensure availability of not only strictly technical items like component assemblies but also items that directly affect passenger satisfaction. They include replacement screens for information displays, new armrests for damaged seats, and even replacement parts for wall games in the compartments for small children. “For me it’s very important to provide only top-quality parts for installation,” says Ibis with pride, and that includes the visuals. “I wouldn’t even give a scratched item to my co-workers but instead would send it straight back to the manufacturer.” And when Ibis takes the train for personal reasons, he has his own little ritual. “The first thing I do is look around the carriage to see if everything is in good shape and the passengers appear satisfied.”

Ultrasound tests, then a wash

“No cause for complaint on trains from Cologne”

Askew, who studied engineering and came to Deutsche Bahn from the aviation and aerospace industry, is delighted with how her crew focuses on the customers. She maintains a high level of motivation with the help of concrete internal communications. They all display the same heading: “No cause for complaint on trains from Cologne.” This slogan can be seen in many places at the depot. And it’s clear that the employees identify with it—from the mechanics and other skilled workers at the track to the planners in the offices.

The boss has big plans for her employees. She wants to give the well-trained mechanics and other specialists more time for their demanding value-adding tasks. To achieve this, robots, cameras, and sensors are expected to relieve them of time-consuming routine testing work. And she wants to give her planners and coordinators more certitude by taking greater advantage of possibilities offered by digitalization. “We still need to do a lot more with the data all the trains send before they arrive at the depot,” says the Cologne site manager. She knows that every minute the depot can save during the night is paid into the “strong rails” account that makes Germany’s fastest trains run on schedule during the day—at future intervals of just half an hour. 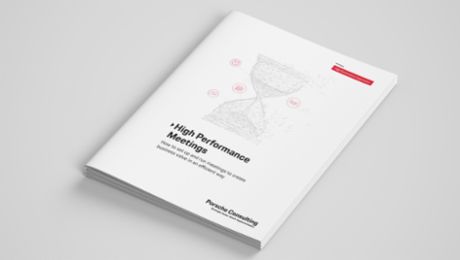 Porsche Consulting has developed a framework for High Performance Meetings. 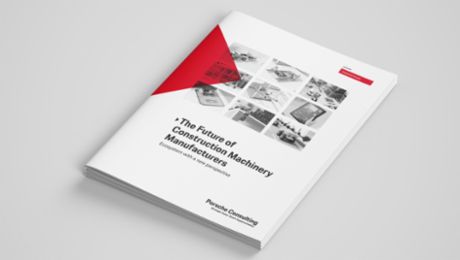 The Porsche Consulting study "The Future of Construction Machinery Manufacturers" provides insights into the future vision and necessary transformation of the construction machinery industry.

The Launch of Smarter Construction

The construction industry cannot keep up with the demand for housing. This is largely because construction sites are not efficient enough. New technologies and business models could succeed in cutting this Gordian knot.

Impact and recovery of urban mobility using Berlin as an example.