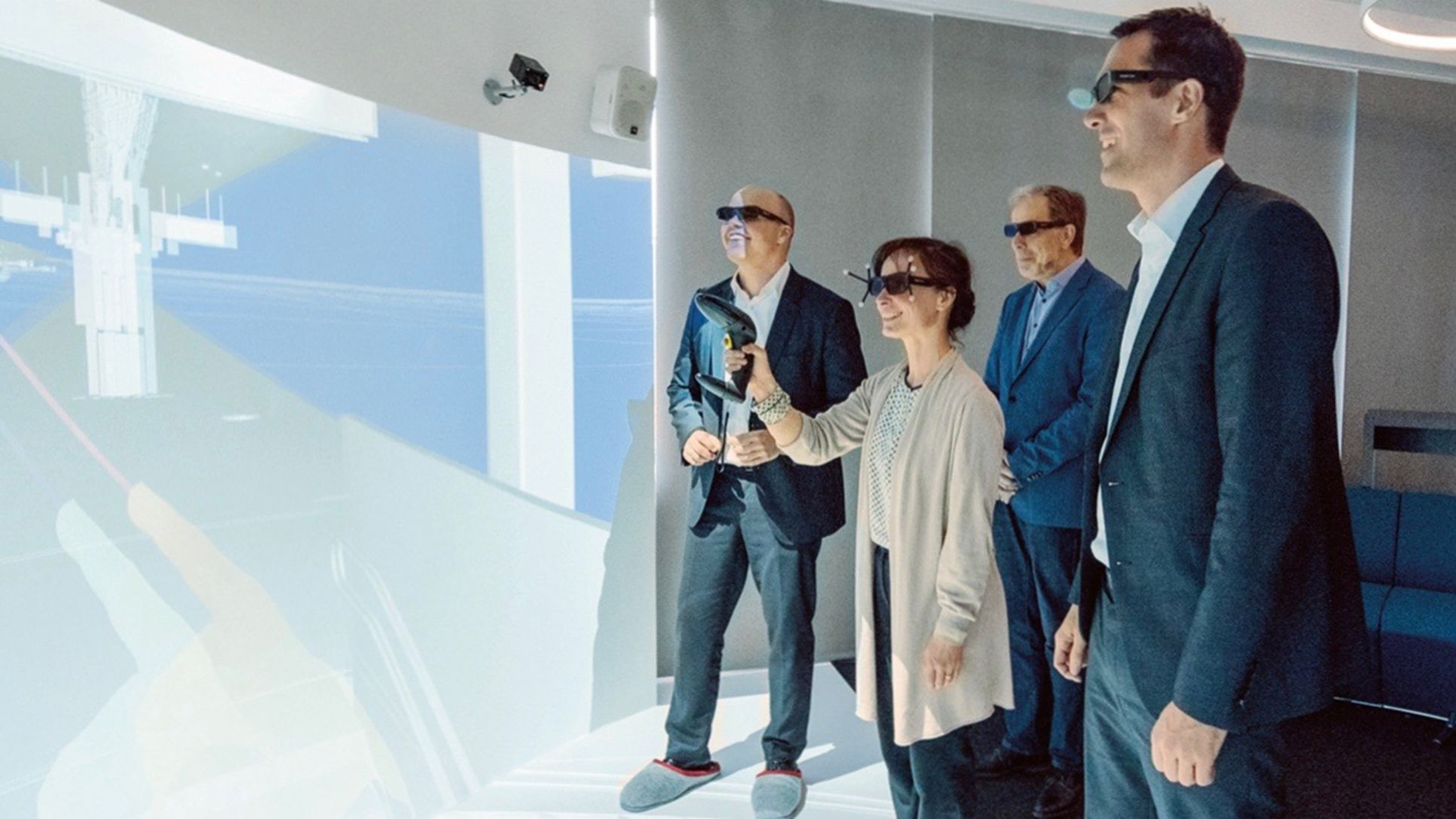 Trains leave every minute, ships line up on the river, freeways are often jammed. Anyone eager to witness the dawn of a new age of mobility is advised to visit Germany’s Upper Rhine Valley. Europe’s most important transport corridor has reached the limits of its capacity. But at least for rail transport, a window is opening onto the future. Billions of euros are being invested into expanding the 182-kilometer rail connection between Karlsruhe and Basel, with two lines for faster trains and new signaling systems. Launched in 1987, work is expected to finish in 2042. Deutsche Bahn’s infrastructure company, DB Netz AG, is planning the project at a large digital laboratory where cutting-edge technology meets the latest advances in project management.

That is apparent as soon as you step out of the elevator in the building in Karlsruhe. Modern offices with flexible work stations, meeting and presentation areas, and special rooms with names like “Think Tank” and “CAVE” occupy 600 square meters of space. The CAVE—which stands for computer-aided virtual environment—is in fact a cavernous space for three-dimensional projections that opened in early 2019, two years after the initial idea. “It is based on BIM, or building information modeling, which means working with digital twins of the projects,” says Sascha Björn Klar, who heads the BIM department. Deutsche Bahn wants to use BIM for all of its new construction projects as of 2020.

The first step in digitalizing the large-scale construction project for the Karlsruhe-Basel line was to gather data. To supplement existing documentation, helicopters and drones made 3-D measurements of the topography from the air, supported by laser cameras on the ground. This generated an enormous database, which continues to grow. “One current challenge has to do with the sheer volumes of data you get from digital inventories of large-scale projects,” says Katarina Roth, a BIM specialist at DB Netz AG. The data are used to create a “digital twin”—or digital replica—of the existing and future infrastructure. The twin contains everything from a well-maintained singlefamily home near the embankment to the control and safety systems on the line, areas at risk of flooding from the Rhine, and plans for parts of the line not yet built.

Creative work begins in the idea room. Surrounded by flexible furnishings—colorful upholstered stools, floor-to-ceiling shelves, and a large whiteboard—teams come up with concepts and use agile methods to develop them further. This lays the groundwork for concrete projects that take specific form in the adjacent open-plan office in ways that enable them to be integrated as easily as possibly: first into the virtual and then into the actual environment of the new line.

And here is where collaboration between DB Netz AG and Porsche Consulting comes into play. The management consultancy was commissioned to speed up planning and construction of large-scale projects by 25 percent. The sooner a rail project is finished, the sooner revenue flows in from its use. Fees are paid by around 380 passenger and freight companies that use the rails of DB Netz AG. They vary from €1.73 to €11.90 per kilometer depending on the type of train and the quality of the line.

“Large-scale” projects are defined as new lines or expansions that cost more than €250 million. “There are more than one hundred of these in Germany,” says Philipp Langefeld, the head of project management and systems for the Karlsruhe-Basel project. That makes Deutsche Bahn the largest building contractor in Germany. The average project duration from commissioning to completion is twenty years. Agile project management was one of the methods recommended by the Porsche consultants. Instead of strict hierarchies, it promotes interaction among all stakeholders. It also entails constant coordination and confirmation among team members, and brief meetings held every day—called “dailies”—to analyze work done thus far. This enhances both motivation and quality. That, combined with their proven lean construction methods, have enabled the consultants to achieve the desired acceleration in initial pilot projects.

One of the tools for speeding up the work is a touchscreen planning table of nearly two square meters in size. Project managers use it to access all digital data and check whether individual steps are consistent and will not impede other work at the site—long before the first excavators sink their shovels into the Rhine Valley. “I can see the relationship between the line and a bridge right away in this virtual realm,” says Langefeld. The planners take a workflow-based approach here. They can assess whether a control wire mast is too close to a bridge abutment, or whether that bridge abutment might have slid onto a cost list where it doesn’t belong.

The planners also use the table to manage the greater complexity that arises from having to work “under the wheels,” or while train service is operating. That means planning for periods when construction is not allowed and for provisional measures like rail detours around construction sites. The enormous screen shows the surrounding landscape from any desired perspective, and even without any new structures—which are simply deleted by a swipe or a click. The people involved in the virtual planning process include both those running the project and those affected by it, such as community representatives and residents who are invited to the CAVE room. Its darkened interior holds stools, a table, and terraced seating. But the cavern-like space is dominated by a bright projection screen on one semi-circular wall and the floor. Visitors start by putting on two important articles: 3-D glasses and oversized felt slippers like those used by tourists at Baroque palaces. Then they may stand on the floor. Instead of beautiful old wood, it consists of a no less valuable digital screen that lets visitors enter into the landscape and view the finished project—even from below if needed.

To simulate their movements, visitors use a “flight stick” or wireless joystick pointer to click on a menu that can be superimposed if desired. They can examine a new stopping point on the platform at a scale of 1:1, or walk through the underpass. They can also “place themselves” between the platforms, where they can inspect the innovative noise reduction structures that extend above the platforms and thereby absorb sound waves that would otherwise go up over the vertical walls toward nearby residences. Known as galleries, they are being used for the first time on the new line in the Rhine Valley, explains Langefeld. “It gives you an idea already of what the noise reduction systems—which are stricter than regulations require—will look like.”

DB Netz’s aim is to use the 3-D object planning system to detect problems earlier and thereby minimize defects and delays. Project management is also professionalized by linking planning with scheduling and funding. Over the long term, the aims are to adapt current planning to further reduce the time required, and to use planning data for “BIM in operation.”

When combined with artificial intelligence, the data will one day streamline both the operations and maintenance of infrastructure facilities. Inspectors will be able to monitor tunnels and bridges by photographing and documenting damaged areas on tablets. The data will automatically prompt a repair proposal that includes a timeline and costs. For future developments of this type, it is important to exchange information with other pilot projects and companies. But that requires appropriate standards, especially at interfaces. As Europe’s largest investor in infrastructure, Deutsche Bahn “is a driving force behind innovation and is viewed positively in the industry,” says Langefeld.