“A special place in my heart”

For Julia Görges, the Porsche Tennis Grand Prix is “a unique oasis of well-being”, the Porsche Arena “like my living room”. An interview just before the start of the 42nd edition of the Stuttgart tournament.

Whenever the 2011 winner comes back to Stuttgart, like now for the 42nd annual competition from April 20 to 28, it arouses strong emotions. “This tournament,” says the Porsche brand ambassador in our interview, “will always have a special place in my heart.”

Julia, with your win in the 2011 Porsche Tennis Grand Prix, you knocked on the door to the world of elite tennis. Do you still see this tournament as a milestone in your career?

“Definitely. Every time I come back to Stuttgart, the many images in my head arouse strong emotions. It was my first big title on the WTA tour and I saw it as a breakthrough. It was unexpected at the time. I’ll never forget the atmosphere in the Porsche Arena after the final against Caroline Wozniacki, who was number one at the time. The Porsche Tennis Grand Prix will always have a special place in my heart.”

Even players who have not yet won the Porsche Tennis Grand Prix enjoy coming to Stuttgart year after year. Why is that?

“The tournament is very well organised. What the players are offered in Stuttgart is unique in the world. Practically our every wish is fulfilled. For me, the Porsche Arena is like my living room, a unique oasis of well-being. And then there are the spectators, who give us fantastic support.”

With eight players from the top 10 in the world and the current Grand Slam winner, the Porsche Tennis Grand Prix once again has a very strong line-up. How far do you have to get to be happy?

“My happiness isn’t really determined by how far I get. The most important thing for me is to work hard in every match – no matter the outcome in the end. Regardless of this I try to take something positive from every win and every defeat. Negative thoughts are of no use, they just pull you down. Thinking positively makes the journey better.”

But ultimately it’s always about the win or the defeat.

“It’s not the only thing. It’s also important to see where you’ve improved since the last match. What did I manage to do this time that didn’t work before? I have very positive thinkers around me. That helps me to stay positive myself, to not put too much pressure on myself and to enjoy every single match. No player yet has managed to win all of her matches in a year.”

After winning the prestigious WTA Elite Trophy in 2017, you made the leap into the top 10 for the first time in 2018 and got through to the Wimbledon semi-final. How happy are you with your progress in recent years?

“After my win in Stuttgart, I had a few years in my career when I couldn’t play my best tennis for various reasons. My new team has helped me to put this time behind me and make progress in many areas, not just as a tennis player. That was a long journey. We did a lot of work on my fitness, and with the fitness came mental strength too. In the Wimbledon semi-final against Serena Williams, I felt that I belonged there and the only thing I was still missing to win was experience. You need matches like that to take the next step. It goes without saying that I’m very happy with this progress.”

How important was the leap into the top 10?

“It fulfilled a childhood dream of mine. That was something very special for me.”

That was also when you became a Porsche brand ambassador. What does this mean to you?

“Since my win in the Porsche Tennis Grand Prix and as a result of competing in the Fed Cup with Porsche Team Germany, I have had a very special relationship with Porsche. It’s a great honour for me to be allowed to represent a company with such a prestigious reputation worldwide as a brand ambassador. That makes me proud.”

It’s an exciting time in women’s tennis. Young players like Naomi Osaka and Aryna Sabalenka are coming to the fore. Is this a sign of a new generation?

“It’s only natural that young players come along, otherwise the sport would die out. However, I don’t think it’s as extreme as before, when it was completely normal to win a Grand Slam at 17 or 18 and become number 1 in the world at 20.  That’s no longer the case. Naomi Osaka is definitely an exception. She deserves her place at the top of tennis, there is no question. But the trick is to stay there for a long time. We’ll see whether she can do that.”

Up for grabs in the “Porsche Race to Shenzhen”, the qualification ranking list for the WTA Final, is one of eight starting places for this final tournament of the season’s most successful players. How do you see your chances?

“Of course the WTA finals are always a goal. Thankfully the qualification race starts at zero this year, so every player has the same chance to achieve this goal. The season is still young, there are still a lot of big events where points can be won. The fact that the matches will be played in Shenzhen this year rather than Singapore doesn’t really matter. What matters is being at this highlight of the season. Regardless of where it’s held.” 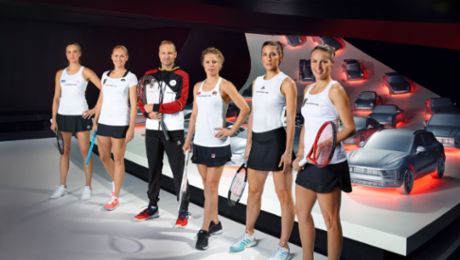 Before the start of the Fed Cup tie against Belarus, Porsche Team Germany visited the Autostadt in Wolfsburg.