With the new 911 Speedster, Porsche is presenting a Heritage Design package—the first in a series of iconic design options for the sports cars of today and of the future.

Small things often attract the most attention. Like the curved, nine-letter logotype: S p e e d s t e r. At Porsche, this logotype stands for legendary road-going and race cars. And now—meticulously milled and gold-plated—it graces the back of a special 911 edition with the Heritage Design package. The 911 Speedster was developed as a GT model in the Porsche motorsports department and refined in the Porsche Exclusive Manufaktur. Style Porsche created the design.

The Speedster logotype reveals how much passion went into this car. Boris Apenbrink, the director of Porsche Exclusive Manufaktur, Stéphanie Kleiböhmer, a color-and-trim designer, and Thorsten Klein, an interior designer, have come to the Porsche Design Studio in Weissach to introduce the new Heritage Design project. It’s immediately clear that it’s a matter of the heart. “We want our customers to be able to reconnect with that sense of vitality our historical cars are known for,” says Kleiböhmer when describing how her team views their goal. For Klein, the “pure Speedster design” is therefore the “ideal basis.” The 911 Speedster connects “tradition with innovation,” adds Apenbrink. “As we enter a new world with the fully electric Taycan, the Speedster sends the clear message that we won’t be forgetting our roots.”

“We want our customers to be able to reconnect with that sense of vitality our historical cars are known for.” Stéphanie Kleiböhmer

Even without the Heritage Design package, the 911 Speedster model is a tribute to history. It comes in a limited edition of 1,948 cars, recalling the Porsche 356 “No. 1” Roadster that received its general certification from the Austrian state government of Carinthia on June 8, 1948. But as far as its technology goes, the new Speedster is cutting edge. Its fenders, front hood, and characteristic rear cladding are made of a lightweight carbon-fiber composite. Porsche’s GT model developers contributed the suspension, exhaust system, and drivetrain with a manual six-speed transmission, as well as the naturally aspirated, four-liter, six-cylinder engine that generates more than 510 hp.

Noteworthy features of its Heritage Design package include bicolor leather furnishings in Black and Cognac, carbon elements in GT Silver Metallic, and an all-metal, gold-plated Speedster logotype. The exterior blends the past and future in impressive ways, especially in the striking color combination of GT Silver Metallic with white front bumpers and “spears” on the fenders.

The 356 Speedster racing sports cars of the 1950s had stickers that protected front hoods and doors from flying gravel, or concealed traces of collisions. But they quickly indicated an early trend toward individualization. For Speedster designer Klein, one of the goals was to “reinterpret that special spirit and joie de vivre of the time.”

“The Speedster sends the clear message that we won’t be forgetting our roots.” Boris Apenbrink

The team was encouraged by the jubilant response to the 911 Speedster concept in heritage design. Porsche introduced the precursor to the current series model last year as part of its “70 Years of Porsche Sports Cars” celebrations. For Apenbrink, the response was a clear signal that “people long for things that stand for values, for a certain trustworthiness and timelessness.” For Porsche, this is more than just a retro design. “We’re not building anything backwards,” says Apenbrink. “We‘re looking to the future and combining classic elements with a modern car.”

The response has been so enthusiastic that Porsche Exclusive Manufaktur and Style Porsche will be making several 911 models with Heritage Design packages—recalling the 1950s, 1960s, 1970s, and 1980s. They’re expected to go on the market at intervals starting next year, initially as limited collector’s models. Certain elements of the respective decades will also be available as options for 911 models that aren’t part of limited series.

The exact appearance of these heritage versions will remain a secret until the cars are unveiled. Design work is being preceded by extensive research at the Porsche Museum. “We’re primarily interested in colors, materials, and textures,” reveals Kleiböhmer. “We’re studying the old fabrics and patterns, and redeveloping them in accordance with current safety and comfort standards.” Kleiböhmer is looking forward to the “return of fabrics,” such as the legendary Pepita pattern of the 1960s or the psychedelic “Pasha” chessboard pattern of the 1970s. She’s combining these with appropriate exterior colors as well as emblems and stickers for the respective periods. “These will be very emotionally evocative products,” promises Apenbrink. “They’ll all embody what has shaped our brand in the past and what Porsche will continue to represent in the future—a pure sports-car culture, combined with the coolness of the era.”

High-grade materials. Precision craftsmanship. Matchless quality. These elements are elegantly combined in the new Porsche 911 Speedster. Porsche Design has worked together with the automotive and motorsport engineers to create a fitting timepiece: the 911 Speedster chronograph. This exclusive watch for a legendary car combines the Speedster’s classic material, performance, and design features to extend the sports car’s unique feeling to the owner’s wrist. The chronograph is powered by a caliber Werk 01.200, developed by Porsche Design, whose high-grade flyback function enables successive intervals to be stopped, reset, and restarted in a single step. Featuring the titanium housing typical of Porsche Design Timepieces, the chronograph comes in a limited series of 1,948, just like the car. For future owners of a 911 Speedster with or without the Heritage Design package, the 911 Speedster chronograph is available exclusively from Porsche Centers. 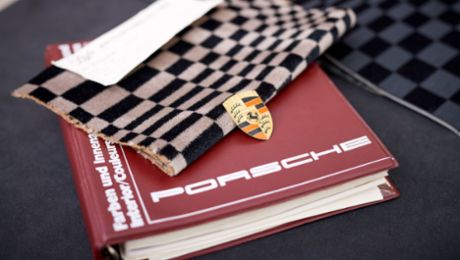 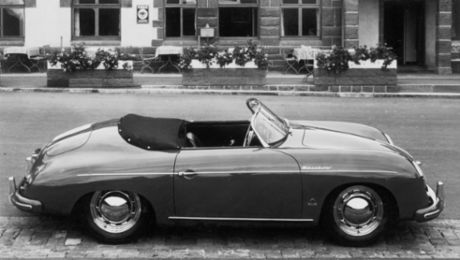 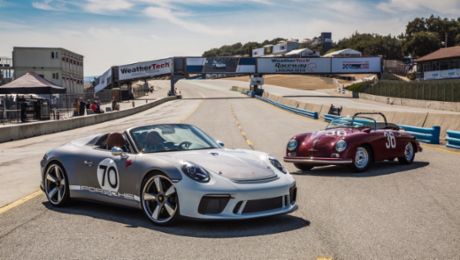