Porsche will showcase a special design on its cars at the final round of the IMSA WeatherTech SportsCar Championship. For the ten-hour Petit Le Mans race at Road Atlanta (USA), the works team of the sports car manufacturer from Weissach will join forces with the global brand Coca-Cola.

The two Porsche 911 RSR will line up on the grid sporting the red background and white lettering of the American beverage company. In this way, the two companies would like to honour their shared successes throughout motorsport history and add a special highlight to conclude the 50th anniversary year of the International Motor Sports Association (IMSA).

Design with an illustrious history

Porsche racing cars flying the Coca-Cola design have an illustrious history in the North American motor racing scene. In the 1980s, the Bob Akin Motor Racing squad first fielded the Porsche 935. The team claimed podium results with the vehicle decked out in the red and white livery, including at the 24 Hours of Daytona (USA), and scored first place in the GTP class in 1983. The following year, the team switched to the spectacular Porsche 962. The No. 5 vehicle sporting the Coca-Cola livery quickly became a favourite amongst fans.

The 1986 season yielded the greatest success, when the American team boss and driver Bob Akin joined forces with the racing legends Hans-Joachim Stuck and Jo Gartner at the Sebring 12-hour race and won. Petit Le Mans represents a home race for Coca-Cola. The corporation has its headquarters in Atlanta in the US state of Georgia. Porsche North America is also based in the metropolis. The construction of the famous Road Atlanta racetrack, which opened in 1970 and has since hosted many spectacular endurance races, was financed by Coca-Cola, amongst others. Porsche tackles the season finale as the leader of the manufacturers’, team and drivers’ classifications.

The Porsche 911 RSR, which is based on the high-performance 911 GT3 RS* road-going sports car, has undergone further optimisation primarily in the suspension setup for its third racing season in North America. Depending on the size of the restrictor, the engine, which is positioned in front of the rear axle, puts out around 375 kW (510 hp). The large rear diffuser combined with a top-mounted rear wing provides aerodynamic efficiency and significant downforce.

Comments on the collaboration

Fritz Enzinger (Vice President Motorsport): “We are keen to add to the celebrations of IMSA’s 50th anniversary at the final round of the season in a very special way. I’m very curious to see how the fans will respond to our two Porsche 911 RSR in Coca-Cola colours. The special vehicle liveries of the past few months have yielded us numerous successes. We won at Road Atlanta last year, we won Le Mans in 2018 and we won at Sebring this year. We’re happy for things to continue like this.”

Pascal Zurlinden (Director Factory Motorsport): “The anniversary season for IMSA comes to an end with a big highlight. It’s fantastic that two such strong brands like Porsche and Coca-Cola are working together. We definitely want to continue our shared success story that began in the 1980s. It would be a dream come true if we could secure the title with a top result – especially considering that it will be the last race outing for this version of the Porsche 911 RSR in the IMSA series.”

Steffen Höllwarth (Head of Operations IMSA Championship): “This year has been one highlight after the other for us. We’ve notched up many successes in the first half of the season with our cars finished in the Brumos livery. Last year we were successful at Petit Le Mans with our Porsche 911 RSR flying the Mobil 1 colours. These special designs have given us many outstanding moments. And this should also be the case with the red and white Coca-Cola paintwork at the season finale on the Road Atlanta racetrack.” 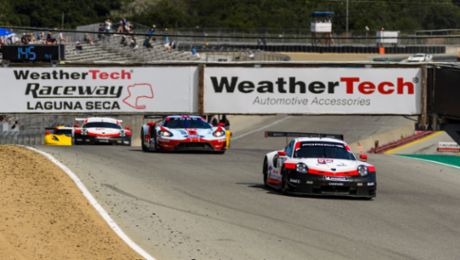 IMSA: Porsche scores vital points on the way to a possible title win

The Porsche GT Team has claimed positions seven and eight at the penultimate round of this year’s IMSA. 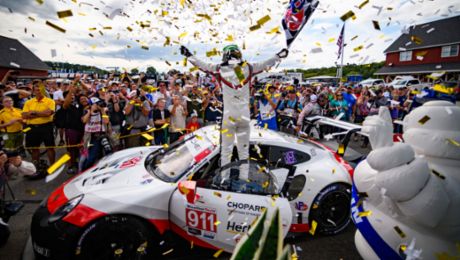 IMSA: Sixth win at round nine for the Porsche GT Team

With a one-two result, Porsche continues its winning streak in the IMSA WeatherTech SportsCar Championship. 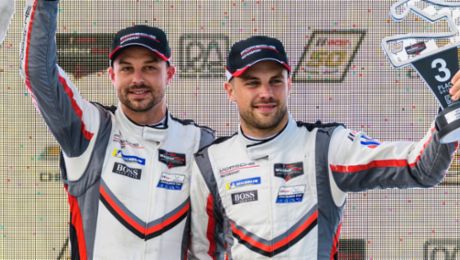 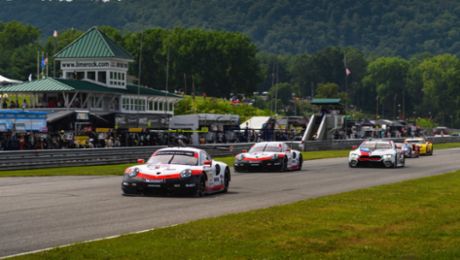 Fuel consumption/Emmissions*
Fuel consumption* combined 13.2 l/100km
CO2 emmissions* combined 303 g/km
Porsche uses cookies to optimise and improve the website, as well as enable the availability of certain functions. By continuing to use this website, you agree to our use of cookies. For further information, please click  here